The 1976 Winter Olympics, officially known as the XII Olympic Winter Games (German: XII. Olympische Winterspiele, French: XIIes Jeux olympiques d'hiver) and commonly known as Innsbruck 1976 (Austro-Bavarian: Innschbruck 1976), was a winter multi-sport event celebrated in Innsbruck, Austria, from February 4 to 15, 1976. The Games were awarded to Innsbruck after Denver, the original host city, withdrew in 1972. This was the second time the Tyrolean capital had hosted the Winter Olympics, having first done so in 1964.

The cities of Denver, Colorado, United States; Sion, Switzerland; Tampere, Finland; and Vancouver (with most events near Mount Garibaldi), British Columbia, Canada, made bids for the Games. The host was decided at the 69th IOC meeting in Amsterdam, Netherlands, on May 12, 1970.[1][2]

In a statewide referendum on 7 November 1972, Colorado voters rejected funding for the games, and for the first (and only) time a city awarded the Winter Games rejected them.[3] Denver officially withdrew on 15 November, and the IOC then offered the games to Whistler, British Columbia, Canada, but they too declined owing to a change of government following elections. Salt Lake City offered to host the games, but the IOC, still reeling from the Denver rejection, declined and selected Innsbruck to host the 1976 Winter Olympics, which had hosted the 1964 Winter Olympics games twelve years earlier, on 5 February 1973.

The mascot of the 1976 Winter Olympics was Schneemann, a snowman in a red Tyrolean hat. Designed by Walter Pötsch, Schneeman was purported to represent the 1976 Games as the "Games of Simplicity". It was also regarded as a good-luck charm, to avert the dearth of snow that had marred the 1964 Winter Olympics in Innsbruck.[4][5] 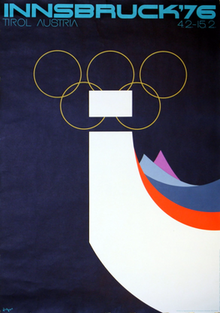 The official poster of the 1976 Winter Olympics 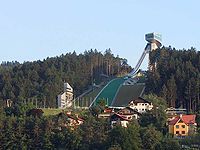 There were 37 events contested in 6 sports (10 disciplines). Ice dance made its Olympic debut. See the medal winners, ordered by sport:

These are the top ten nations that won medals at the 1976 Winter Games.