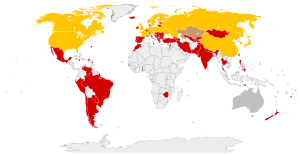 The 2014 Winter Olympics, officially known as the XXII Olympic Winter Games, were a winter multi-sport event held in Sochi, Russia, from 7 to 23 February. A total of 2,873 athletes from 88 nations participated in 98 events in 7 sports across 15 different disciplines.[1][2] 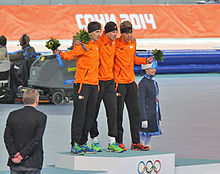 From left to right: Jan Blokhuijsen (silver), Sven Kramer (gold) and Jorrit Bergsma (bronze) with medals they earned in the men's 5,000 metres speed skating, one of the four podium sweeps by the Netherlands.[14]
See also: List of 2014 Winter Olympics medal winners

The medal table is based on information provided by the International Olympic Committee (IOC) and is consistent with IOC convention in its published medal tables. By default, the table is ordered by the number of gold medals the athletes from a nation have won, where nation is an entity represented by a National Olympic Committee (NOC). The number of silver medals is taken into consideration next and then the number of bronze medals.

On 18 July 2016, the McLaren Report was published alleging that the Russian government had sanctioned the use of performance-enhancing drugs by Russian athletes in the 2014 Winter Olympics.[17]

On 9 December 2016, a World Anti-Doping Agency report expanded upon the previous report and included the note that "Two [Russian] [sport] athletes, winners of 4 Sochi Olympic Gold medals, and a female Silver medal winner in [sport] had samples with salt readings that were physiologically impossible" and that "Twelve [Russian] medal winning athletes ... from 44 examined samples had scratches and marks on the inside of the caps of their B sample bottles, indicating tampering".[18]

In December 2016, following the release of the McLaren Report on Russian doping at the Sochi Olympics, the International Olympic Committee announced the initiation of an investigation of 28 Russian athletes at the Sochi Olympic Games. The number later rose to 46.

From 1 November 2017 to 22 December 2017 the IOC handled 46 cases related to Russian team doping. 3 cases have been closed without sanction and without official disclosing the names of suspected athletes. 43 Russian athletes were disqualified from the 2014 Winter Olympics and banned from competing in the 2018 edition and all other future Olympic Games as part of the Oswald Commission.[19]

On 1 February 2018 the IOC said in a statement that “the result of the CAS decision does not mean that athletes from the group of 28 will be invited to the 2018 Games. Not being sanctioned does not automatically confer the privilege of an invitation” and that “this [case] may have a serious impact on the future fight against doping”. The IOC found it important to note that CAS Secretary General "insisted that the CAS decision does not mean that these 28 athletes are innocent” and that they would consider an appeal against the courts decision.[35] On 9 February 2018 the CAS dismissed 47 appeals from Russian athletes and coaches to the IOC's decision not invite these athletes and coaches to the 2018 Olympics.[36] On 19 January 2019 the IOC's appeal of Legkov's case was rejected and the organization decided not to proceed with 27 remaining cases because the chance of winning would be very low. The IOC voiced its disappointment with the decision.[37]