The 2024 Summer Olympics (French: Jeux olympiques d'été de 2024), officially the Games of the XXXIII Olympiad (French: Jeux de la XXXIIIe Olympiade) and also known as Paris 2024, is an upcoming international multi-sport event that is scheduled to take place from 26 July to 11 August 2024 with Paris as its main host city and 16 cities spread across Metropolitan France and one in the French overseas territory of Tahiti as subsites.[4]

Paris was awarded the Games at the 131st IOC Session in Lima, Peru, on 13 September 2017. Due to multiple withdrawals that left only Paris and Los Angeles in contention, the International Olympic Committee (IOC) approved a process to concurrently award the 2024 and 2028 Summer Olympics to the two cities. Having previously hosted in 1900 and 1924, Paris will become the second city to host the Summer Olympics three times after London (1908, 1948 and 2012). The Paris Games of 2024 will mark the centenary of the Paris Games of 1924, the sixth Olympic games hosted by France (three in summer - 1900, 1924, 2024 and three in winter - 1924, 1968, 1992), and the first Olympic Games in France since the 1992 Winter Olympics in Albertville. The event will return to its usual 4-year Olympiad cycle, after the 2020 Summer Olympics in Tokyo, Japan was delayed by a year due to the COVID-19 pandemic.

The Games will feature the debut of breaking (breakdancing) as an Olympic event, and it will also be the final Olympic Games held during the presidency of IOC President Thomas Bach.[5]

Further information: Bids for the 2024 and 2028 Summer Olympics

Paris, Hamburg, Budapest, Rome, and Los Angeles were the five candidate cities. The process was slowed by withdrawals, political uncertainty, and deterring costs.[6] Hamburg withdrew its bid on 29 November 2015 after holding a referendum.[7] Rome withdrew on 21 September 2016 citing fiscal difficulties.[8] On 22 February 2017, Budapest withdrew after a petition against the bid collected more signatures than necessary for a referendum.[9][10][11]

Following these withdrawals, the IOC Executive Board met in Lausanne, Switzerland, to discuss the 2024 and 2028 bid processes on 9 June 2017.[12][13] The International Olympic Committee formally proposed electing the 2024 and 2028 Olympic host cities at the same time in 2017, a proposal which an Extraordinary IOC Session approved on 11 July 2017 in Lausanne.[13] The IOC set up a process whereby the LA 2024 and Paris 2024 bid committees met with the IOC to discuss who would host the Games in 2024 and 2028, and whether it was possible to select the host cities for both at the same time.[14]

Following the decision to award the two Games simultaneously, Paris was understood as the preferred host for 2024. On 31 July 2017, the IOC announced Los Angeles as the sole candidate for 2028,[15][16] enabling Paris to be confirmed as host for 2024. Both decisions were ratified at the 131st IOC Session on 13 September 2017.[17]

Paris was elected as the host city on 13 September 2017 at the 131st IOC Session in Lima, Peru. The two French IOC members, Guy Drut and Tony Estanguet, were ineligible to vote under the rules of the Olympic Charter.

The French segment at the Tokyo 2020 closing ceremony was performed live on Place du Trocadéro, which will be the site of the protocolar segments for 2024 opening ceremonies.

In July 2021, Paris 2024 president Tony Estanguet stated that the COJOP2024 was conducting a feasibility study on hosting the opening and closing ceremonies outside of a traditional stadium setting, so that they could "marry the best of Paris–the iconic sites–to the possibility of engaging with hundreds of thousands of people, maybe more."[18] This concept of an "open Games" was exemplified in the Paris 2024 handover presentation during the Tokyo 2020 closing ceremony,[18] which featured a live segment from a viewing party at Place du Trocadéro.[19] Estanguet expected the sites for the ceremonies to be announced by the end of the year.[18]

On 13 December 2021, it was announced that the opening ceremony will feature athletes being transported by boat from Pont d'Austerlitz to Pont d'Iéna along the Seine river. The 6 km (3.7 miles) route will pass landmarks such as the Louvre, Notre-Dame de Paris, and Place de la Concorde, and feature cultural presentations. The official protocol will take place at a 30,000 seat "mini-stadium" at the Trocadéro. Organisers stated that the ceremony would be the most "spectacular and accessible opening ceremony in Olympic history", with Estanguet stating that it would be free to attend, and estimating that it could attract as many as 600,000 spectators. This event is expected to return on its full spectator capacity after the majority of the events at the previous Summer Olympics in Tokyo were held behind closed doors with no public spectators due to the COVID-19 pandemic.[20][21][22] Originally, the closing ceremony was expected to take place also at the provisional arena. However, on September 23, 2022, when Thomas Jolly was announced as four ceremonies (two olympic and two paralympic) creative director, the Organizing Committee announced that the closing ceremonies for both the Olympic and Paralympic Games will be held at the Stade de France, while the possibility is being considered to held the Paralympics Opening at the Place de la Concorde.[23] This will be the first Olympic Games where the opening ceremonies will not be hosted in a traditional stadium, and the second time in Summer Olympics history where opening ceremonies will not be held in the same stadium as the athletics competition (as it happened in Rio de Janeiro in 2016).[24]

Under current IOC policies, the programme of the Summer Olympics consists of 28 mandatory "core" sports that persist between Games, and optional sports that may be added by the IOC and organising committee in order to improve local interest,[25][26] provided that the total number of participants does not exceed 10,500 athletes.[27] During the 131st IOC Session in September 2017, the IOC approved the 28 sports of the 2016 programme for Paris 2024, while also inviting the Paris Organising Committee to submit up to five additional sports for consideration.[28][29]

In August 2017, the Paris Organising Committee announced that it would hold talks with the IOC and professional esports organisations about the possibility of introducing competitive video gaming in 2024.[30][31] In July 2018, the IOC confirmed it would not consider esports for the 2024 Olympics.[32] On 21 February 2019, the Paris Organising Committee announced they would propose the inclusion of breakdancing (breaking), as well as skateboarding, sport climbing, and surfing—three sports which debuted at the then-upcoming 2020 Summer Olympics as optional sports.[33][34][32] All four sports were approved during the 134th IOC Session in Lausanne, Switzerland on 24 June 2019.[34][32][35]

The 2024 Summer Olympic program is scheduled to feature 32 sports encompassing 329 events, the first Summer Olympics since 1960 to have fewer events than the preceding edition. The number of events in each discipline is noted in parentheses.[36]

*The following is a list of National Olympic Committees who have at least one athlete who has qualified for the 2024 Olympics.

The following schedule is correct as of the press release by COJOP2024 in July 2022. The exact schedule may change in due time.

All times and dates use Central European Summer Time (UTC+2)

Most of the Olympic events will be held in the city of Paris and its metropolitan region, including the neighbouring cities of Saint-Denis, Le Bourget, Nanterre, Versailles, and Vaires-sur-Marne. Lille will host the handball events, while the sailing events will be held in the Mediterranean city of Marseille and the surfing events are expected to be held in Teahupo'o village in the overseas territory of French Polynesia respectively. Football will be hosted in six other cities, which are Marseille, Lyon, Saint-Étienne, Bordeaux, Nantes and Nice, in addition to Paris, with some of them were home to Ligue 1 clubs. 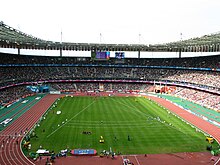 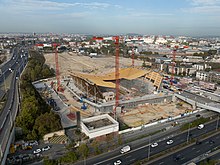 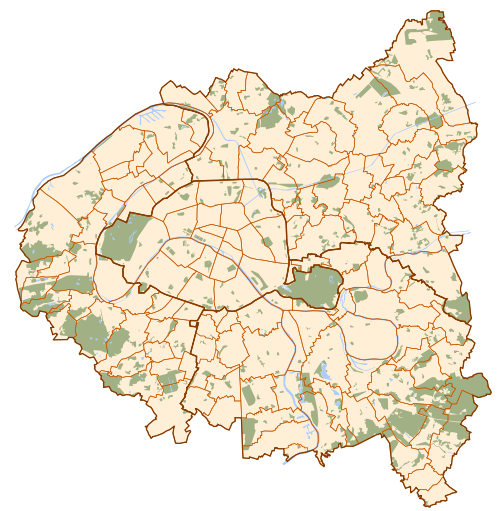 Olympique Colombes
class=notpageimage|
Location of the facilities in the Paris area (ex. Versailles) 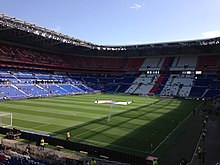 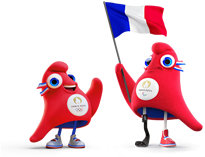 The emblem for the 2024 Summer Olympics and Paralympics was unveiled on 21 October 2019 at the Grand Rex. Inspired by Art Deco,[40][41] it is a representation of Marianne, the national personification of France, with a flame formed in negative space by her hair. The emblem also resembles a gold medal. Tony Estanguet explained that the emblem symbolised "the power and the magic of the Games", and the Games being "for people". The use of a female figure also serves as an homage to the 1900 Summer Olympics in Paris, which were the first to allow women to participate.[42] The emblem was designed by the French designer Sylvain Boyer[43] with the French design agencies Ecobranding & Royalties.[44][45][43]

The emblem for Paris 2024 was considered the biggest new logo release of 2019 by many design magazines.[46][47] An Opinion Way survey shows that 83 percent of French people say they like the new Paris 2024 Games emblem. Approval ratings were high, with 82 percent of those surveyed finding it aesthetically appealing and 78 percent finding it to be creative.[48] It was met with some mockery on social media, one user commenting that the logo "would be better suited to a dating site or a hair salon".[49]

For the first time, the 2024 Summer Paralympics are sharing the same logo and the look of games, as their corresponding Olympics, with no difference, reflecting a shared "ambition" between both events.[50]

In France, domestic rights to the 2024 Summer Olympics are owned by Warner Bros. Discovery (formerly Discovery Inc.) via Eurosport, with free-to-air coverage sub-licensed to the country's public broadcaster France Télévisions.[56]