Home > Roald > Bio
This article is about the road race. Not to be confused with 20,000 metres, the race run on a track.

The 20K run (20 kilometres, or approximately 12.4 miles) is a long distance foot race. It is a rarely held race that is not recognized as an Olympic event. The event held IAAF world championship status in 2006 only, when the existing IAAF World Half Marathon Championships briefly hosted the shorter distance.[1]

The world best for men is held by Zersenay Tadese of Eritrea who ran a time of 56:01 at the 2006 IAAF World Road Running Championships in Debrecen, Hungary.[2] The women's world best is held by Florence Kiplagat of Kenya who ran a time of 1:01:54 at the 2015 Barcelona Half Marathon in Barcelona, Spain.[3] IAAF records require the 20 km distance to be run on a course without a significant drop in elevation between the start and finish points and where the birds-eye distance between the start of finish points is less than ten kilometres. The Association of Road Racing Statisticians has an additional criteria in that it requires records to be set in competitions of the given distance, thus it does not recognise Kiplagat's run due to it being recorded en route to a longer distance. The ARRS-recognised world record is 1:03:21 by Lornah Kiplagat of the Netherlands, who also recorded her time at the 2006 World Championships.[4]

The 2012 women's podium from the 20 km of Lausanne, Switzerland.

There are several annual road running competitions over the 20 km distance, mostly based in Western Europe, the United States, and Japan.[5]

Below is a list of other times equal or superior to 55:47: 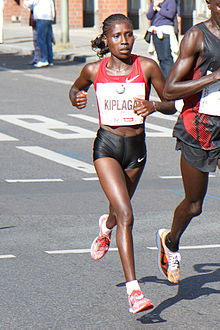