It is one of the track events in the Olympic Games and the World Athletics Championships; it is also an event recognized by World Athletics.[1] The obstacles for the men are 36 inches (91.4 cm) high, and for the women 30 inches (76.2 cm).

The water jump consists of a barrier followed by a pit of water with a landing area defined as follows: The pit is 3.66 m (12 feet) square. The pit's forward-direction measurement starts from the approach edge of the barrier and ends at the point where the water jump slope reaches the flat surface of the steeple pathway. Rulebook language simply but clearly says "The water jump, including the hurdle, shall be 3.66 m in length." Pits have an upward slope; the water is deeper near the barrier and is within 2 cm of ground level at the departure end. That slope begins approximately 30 cm (12 in) forward of the barrier at which point the water is 70 cm (28 in) deep.

The length of the race is usually 3,000 metres (9,843 ft); junior and some masters events are 2,000 metres (6,562 ft), as women's events used to be. The circuit has four ordinary barriers and one water jump. During the course of the race, each runner must clear a total of 28 ordinary barriers and seven water jumps. This entails seven complete laps after starting with a fraction of a lap run without barriers. The water jump is located on the back turn, either inside the inner lane or outside the outer lane. If it is on the outside, then each of the seven laps is longer than the standard 400 m, and the starting point is on the home straight. If the water jump is on the inside, each lap is shorter than 400 m, the starting point is on the back straight, so the water jump and barrier in the home straight are bypassed in the first half lap at the start.

The dimension of an obstacle

Unlike those used in hurdling, steeplechase barriers do not fall over if hit, and the rules allow an athlete to negotiate the barrier by any means, so many runners step on top of them. Four barriers are spaced around the track on level ground, and a fifth barrier at the top of the second turn (fourth barrier in a complete lap from the finish line) is the water jump. The slope of the water jump rewards runners with more jumping ability, because a longer jump results in a shallower landing in the water.

1 Until 2002 he was known as Stephen Cherono, and represented Kenya.

The following athletes had their performance (inside 7:55.00) annulled due to doping offences:

The following athletes had their performances (inside 9:08.00) annulled due to doping offences: 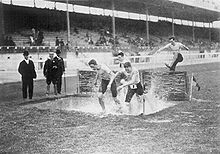 Women's race at the 2007 World Championships