listen)) is a city in the Santa Monica Mountains[9] region of Los Angeles County, California, United States. Its population was 20,330 at the 2010 census,[8] which decreased to 20,299 in 2020.[10] It is in the eastern Conejo Valley between the Simi Hills and the Santa Monica Mountains. The city is in western Los Angeles County and is bordered to the north by Bell Canyon and Ventura County. It is 35 miles (56 km) northwest of Downtown Los Angeles and less than 10 miles (16 km) west of the Los Angeles city limits at Woodland Hills. Agoura Hills and unincorporated Agoura sit next to Calabasas, Oak Park, and Westlake Village.

The area was first settled by the Chumash Native Americans around 10,000 years ago.[11] The Alta California (Upper California) coast was settled by Spanish Franciscan missionaries in the late 18th century.

In about 1800, Miguel Ortega was granted a Spanish grazing concession called Rancho Las Virgenes or El Rancho de Nuestra Señora La Reina de Las Virgenes. The grant was abandoned after Ortega's death in 1810, and José Maria Dominguez was given Rancho Las Virgenes as a Mexican land grant in 1834. Maria Antonia Machado de Reyes purchased the rancho from Dominguez in 1845. (The "Reyes Adobe" ranch headquarters sits today in central Agoura Hills, where it is part of the Reyes Adobe Museum built around 2004 and owned by the Los Angeles County Parks and Recreation Department.[12])

By 1900, the area was being used as a popular stage stop for travelers because of its natural spring.

In the 1920s, the community was briefly known as Picture City, as Paramount Pictures owned a ranch known as Paramount Ranch used for filming Westerns.[13] To obtain a post office of their own, the residents were required to choose a one-word name, and in 1927 chose the shortest name proposed: a misspelling of the last name of Pierre Agoure, a local Basque man and French immigrant who had settled in the area in 1871 to live the lifestyle of the Mexican rancher. Styling himself Don Pierre Agoure, he was a successful sheep herder and had a reputation as a swashbuckler.[14][15] 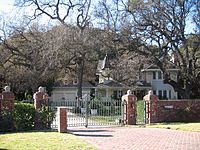 An estate in Old Agoura

Agoura began to grow in the late 1960s after the Ventura Freeway section of U.S. Route 101 was built through the area, dividing the community into northern and southern sections. The first housing tracts in Agoura were Hillrise, Liberty Canyon and Lake Lindero. Rapid growth continued during the 1970s, when schools were built and much of downtown erected.

In 1982, the residents of the proposed city voted in favor of cityhood by a 68% majority. Agoura Hills became the 83rd City in Los Angeles County. Elected to the first City Council were Mayor Fran Pavley, Mayor Pro Tem Carol Sahm, Councilmembers Ernest Dynda, John Hood, and Vicky Leary.[16] Incorporating a year after neighboring Westlake Village, the drive for cityhood in the region was largely based on public discontent with the county's failure to limit residential development of the area, motives that influenced Calabasas to follow suit in 1991.[17]

The 1980s was a period of growth, with large land areas being subdivided into housing tracts. In the 1990s, businesses set up shop in the downtown including shops and restaurants. 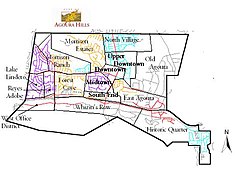 In 1995, the murder of Jimmy Farris (the infamous Brandon Hein case) awakened the city to a rising drug problem and petty theft by its young. As a result, the city began sponsoring live music competitions and concerts in local parks.

In November 2018, the Woolsey Fire occurred during Santa Ana winds burning through the community.[18] One victim was found on Tuesday November 13 in the 32000 block of Lobo Canyon Road.[19][20]

Agoura Hills is known regionally for its live music scene and originality in the nu metal scene, a fame that has given rise to such acts as Linkin Park, Dub Thompson, Skye Aspen, Incubus, Hoobastank, and Fort Minor.

Agoura Hills has a mountain called Ballard Mountain named after pioneer settler and freed slave John Ballard.[21] The name of the mountain was officially changed from Negrohead to Ballard in a ceremony on February 20, 2010.[22] Ladyface Mountain is another prominent mountain on the west side of the Conejo Valley and stands at an elevation of 2,031 feet (619 m).[23]

Agoura Hills is called the "Gateway to the Santa Monica Mountains National Recreation Area".[24] The city is unofficially divided into a number of varied districts centered on the modern Downtown area of the city. The most notable of these districts include Morrison Ranch, Downtown, Forest Cove, South End, Malibu Junction, East Agoura, and Old Agoura. 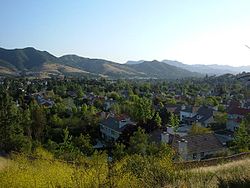 Western Agoura Hills from the hills north of Morrison Ranch

Natural areas of Agoura Hills are part of the California chaparral and woodlands ecoregion and are covered by hundreds of local plant species, some of which are very rare, and others of which have become popular ornamentals. The range is host to an immense variety of wildlife, from mountain lions to the endangered Southern California Distinct Population Segment of steelhead.[25] The mountain lion population within the Santa Monica Mountains (which includes the Simi Hills & Santa Susana Pass) is severely depleted with only seven known living adult individuals. The primary cause of the decline is due to a combination of traffic related mortality (three from the area were killed within a matter of months,) anti-coagulants ingested from human poisoned prey (two individuals within the Simi Hills) and attacks by other, more dominant mountain lions (an elder male, known as P1, killed both his son and his mate, this is thought to be due to a lack of space available.) The Wallis Annenberg Wildlife Crossing is a proposed vegetated overpass spanning the Ventura Freeway and Agoura Road at Liberty Canyon on the east end of the city. Snakes are common but only occasionally seen. Local species include the Southern Pacific Rattlesnake (the only venomous species), Mountain Kingsnake, California Kingsnake, Gopher snake, and Garter snake. The mountains are also home to the Western fence lizard.

In 2010, the Los Angeles Times reported that the New Zealand mud snail had infested watersheds in the Santa Monica Mountains, posing serious threats to native species and complicating efforts to improve stream-water quality for the endangered steelhead trout. According to the article, the snails have expanded "from the first confirmed sample in Medea Creek in Agoura Hills to nearly 30 other stream sites in four years." Researchers at the Santa Monica Bay Restoration Commission believe that the snails' expansion may have been expedited after the mollusks traveled from stream to stream on the gear of contractors and volunteers.[26] 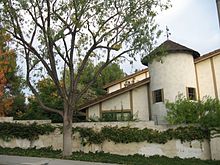 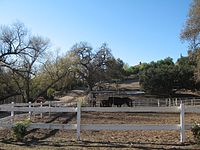 A ranch in Old Agoura

According to the city's 2020 Comprehensive Annual Financial Report,[32] the top employers in the city are:

In the United States House of Representatives, Agoura Hills is in California's 33rd congressional district, represented by Democrat Pete Aguilar.[39]

Las Virgenes Water District serves Agoura Hills along with Westlake Village and other parts of western Los Angeles County. State water provided by the Metropolitan Water District of Southern California is the sole source used by the district.[40]

Agoura Hills is the corporate headquarters of the Los Angeles Rams since 2016.[47]