Public university in Montgomery, Alabama, United States
Not to be confused with University of Alabama.

Alabama State University (ASU) is a public historically black university in Montgomery, Alabama. Founded in 1867, ASU is a member-school of the Thurgood Marshall College Fund.

Alabama State University was founded in 1867 as the Lincoln Normal School of Marion in Marion. In December 1873, the State Board accepted the transfer of title to the school after a legislative act was passed authorizing the state to fund a Normal School, and George N. Card was named president. Thus, in 1874, this predecessor of Alabama State University became America's first state-supported educational institution for blacks. This began ASU's history as a "teachers' college."[4]

In 1878, the second president, William Paterson, was appointed. He is honored as a founder of Alabama State University and was the president for 37 of the school's first 48 years. Paterson was instrumental in the move from Marion to Montgomery in 1887.[4]

In 1887, the university opened in its new location in Montgomery, but an Alabama State Supreme Court ruling forced the school to change its name; it was renamed the Normal School for Colored Students. The campus was chosen in 1889 although preparing the buildings at the site took a while longer.[5]

WVAS-FM was launched on June 15, 1984, beaming 25,000 watts of power from the fifth floor of the Levi Watkins Learning Center for two years before moving to its current location at Thomas Kilby Hall. Today, WVAS has grown to 80,000 watts and has a listenership that spans 18 counties, reaching a total population of more than 651,000. In recent years, the station has also begun streaming its broadcast via the Web, connecting a global audience to the university.[4]

The early 1990s witnessed the beginning of WAPR-FM (Alabama Public Radio), which Alabama State University and Troy University, both of which already held station licenses of their own, cooperated with the University of Alabama in building and operating. WAPR-FM 88.3—Selma's signal reaches the region known colloquially as the Black Belt, about 13 counties in the west central and central parts of Alabama, including the city of Montgomery.[4]

Alabama State University has nearly 6,000 students from more than 40 states and over 20 countries.[10] 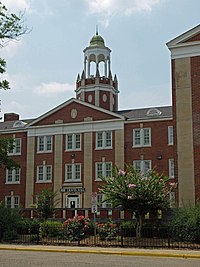 More than 70 student organizations are chartered at Alabama State, including nine National Pan-Hellenic Council Greek-letter organizations, a full range of men's and women's intramural and intercollegiate sports, and 17 honors organizations. In addition to social, cultural and religious groups, there are musical opportunities, such as the marching and symphonic bands, the choir, and departmental organizations for most majors. The Hornets also have a Student Government Association, in which every student at the university holds membership.[18]

The Alabama State University Department of Athletics currently sponsors men's intercollegiate football, baseball, basketball, golf, tennis, track and cheerleading, along with women's intercollegiate basketball, soccer, softball, bowling, tennis, track, volleyball, golf and cheerleading. Sports teams participate in NCAA Division I (FCS – Football Championship Subdivision for football) in the Southwestern Athletic Conference (SWAC), which it joined in 1982. The university's colors are black and old gold and their nickname is the Hornets.[19]

The Mighty Marching Hornets and Sensational Stingettes in 2011

Alabama State's marching band is officially known as "The Mighty Marching Hornets". The band has been invited several times to the Honda Battle of the Bands and has been nationally recognized. The Mighty Marching Hornets were stars of a documentary series, Bama State Style, which offered a peek into the lives of the students in the band. In 2016, The Mighty Marching Hornets made an appearance in Ang Lee's film Billy Lynn's Long Halftime Walk.[20] In 2017, the band's 2012 halftime performance at the Magic City Classic garnered over three million views on YouTube. In 2019, the band performed in the Rose Parade in Pasadena, California on New Year's Day. The band is traditionally led by four or five drum majors. The band performs at select football games, all SWAC basketball home games, and other special events.

The featured auxiliary is "The Sensational Stingettes", a danceline that debuted in 1977. They were invited to appear in the "Give It 2 U" music video and live performance with artists Robin Thicke, Kendrick Lamar, and 2 Chainz.[21][22] Also, they were shown in Beyonce's Netflix special "HΘMΣCΘMING: A film by Beyonce".[23]

The most recently added auxiliary is the Honey-Beez, a danceline composed of only plus-size young women that debuted in 2004.[24] In 2017, they were selected to showcase their talents and compete on America's Got Talent.[25]

The Bama State Collegians is a big band jazz orchestra sponsored by Alabama State University. In the 1930s, the ensemble was directed by noted jazz trumpeter Erskine Hawkins, an inductee of both the Alabama Jazz Hall of Fame and the Alabama Music Hall of Fame. After moving to New York City, the Collegians, directed by Hawkins, became the Erskine Hawkins Orchestra and produced a string of national hit records, including "Tuxedo Junction", "After Hours", "Tippin' In" and others. The song "Tuxedo Junction", with its recordings by Hawkins and by the Glenn Miller Orchestra, became one of the anthems of World War II. In 2011, Hawkins' story of and his start in the Bama State Collegians was the subject of a Florida State University Film School MFA thesis film, The Collegians, written and directed by Alabama State University alumnus Bryan Lewis.[26][27][28]

Students are served by two media publications, The Hornet Tribune (student newspaper) and The Hornet (the student yearbook).[29][18]