Assyrian Americans (Syriac: ܣܘܼܖ̈ܵܝܹܐ ܐܲܡܪ̈ܝܼܟܵܝܹܐ) refers to individuals of ethnic Assyrian ancestry born in or residing within the United States of America. Assyrians are an indigenous Middle-Eastern ethnic group native to Mesopotamia in West Asia who descend from their ancient counterparts, directly originating from the ancient indigenous Mesopotamians of Akkad and Sumer who first developed the independent civilisation in northern Mesopotamia that would become Assyria in 2600BCE. Modern Assyrians often culturally self-identify as Syriacs, Chaldeans, or Arameans for religious and tribal identification. The first significant wave of Assyrian immigration to the United States was due to the Sayfo genocide in the Assyrian homeland in 1914-1924.

The largest Assyrian diaspora is located in Metro Detroit, with a figure of 150,000.[5] High concentrations are also located in Phoenix, San Jose, Modesto, San Diego, Los Angeles, Turlock, and Chicago among others.[6]

Assyrians have been present in the United States since the late 19th century. The first recorded Assyrian in America was Zia Attala.[7] He reportedly immigrated to Philadelphia in 1889 and found work in the hotel industry.[8] Most early Assyrian immigrants, however, were young men sent by Western missionaries for religious training.[9]

Following the turn of the century, Assyrian immigration to America mostly came to a halt due to the Immigration Act of 1924, which effectively cut off any legal immigration to the United States for Assyrians and other non-Western European groups. The second large wave of immigration occurred in the 1960s and 70s, mainly from northern Iraq due to conflicts and persecution by the Ba’athist government of Iraq. Others arrived from Iran following the Iranian Revolution. Many Assyrians arrived during this period and took advantage of the ongoing White flight in Detroit.

As a result of the situation, Assyrians gained a monopoly over grocery stores and other small businesses, and in many cases used their finances and newfound wealth to benefit the Assyrian community there and take in Assyrian refugees from Iraq. More Assyrians arrived throughout the 80s and 90s for similar reasons, with newer residents moving out of Detroit into suburbs such as Royal Oak and Sterling Heights due to the crack epidemic in Detroit, while others began to move to San Diego, establishing a new Assyrian community there.

In 2005, the first Assyrian school in the United States, the Assyrian American Christian School, opened in Tarzana, Los Angeles. 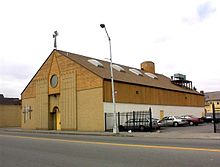 Assyrian immigration to cities in Michigan began in the early 20th century. The cities in the state include, but are not limited to, Detroit, Southfield, Sterling Heights, Oak Park, Troy, West Bloomfield, Walled Lake, Rochester Hills, Farmington Hills, Ferndale, Warren, Bloomfield Hills and Ann Arbor. More and more Assyrians, as they establish themselves financially, quickly move out of Detroit and into the other locations, including San Diego and cities in Arizona.

Less stringent immigration laws during the 1960s and 1970s facilitated increasing numbers, with the 1970s seeing the highest number of Assyrians coming to the United States. In 1962, the number of Assyrian owned grocery stores was 120, but grew to 278 in 1972. The main cause of this were the 1967 Detroit riots, after which Jewish grocery store owners left the area and left the opportunity open for Assyrians to take over. Often these Jews sold their old stores to Assyrians.[10]

Iraqi president Saddam Hussein donated hundreds of thousands of dollars to Chaldean Catholic Churches in Detroit and received a key to the city in the 1980s on behalf of mayor Coleman Young, when the Ba’ath regime was an ally of the United States government.[11]

Mostly all new Chaldean Catholic Assyrian immigrants and low-income senior citizens tend to reside in Detroit, in the 7 Mile Road between Woodward Avenue and John R Street. This area was officially named Chaldean Town in 1999.[12] There are eight Chaldean Catholic Churches in Metro Detroit, located in West Bloomfield, Troy (where there are two), Oak Park, Southfield, Warren, Sterling Heights and Detroit.

After World War II, several Assyrian men who had been educated in Iraq by American Jesuits traveled to the United States. They were to teach Arabic to U.S. officers at the Army Language School who were going to be stationed in the Middle East. The men started the San Diego-area Chaldean Catholic community. Yasmeen S. Hanoosh, author of The Politics of Minority Chaldeans Between Iraq and America, wrote that the Chaldean Catholic Church in San Diego "continued to grow in relative isolation from the family-chain-migration based communities in and around Michigan."[13]

Rev. Peter Elia from Iran was the first priest of the Chaldean Catholic community in Chicago which originated in 1907. In 1912, the St. Ephrem Chaldean Parish of Chicago was formed by Rev. Warda Mirza, also from Iran.[14]

According to the 2011 American Community Survey 1-Year Estimates there are 110,807 Assyrian people in the United States.[3][4]

The 2000 U.S. Census counted 82,355 Assyrians (including those who identify as Chaldean or Syriac) in the country, of whom most lived in Illinois. These 3 groups were listed as one category in the United States Census[15]

There were 15,685 Assyrians living in Illinois according to the 2000 United States census.[19]

The Federal government of the United States took the word Syrian to mean Arabs from the Syrian Arab Republic and not as one of the terms to identify the ethnically distinct Assyrians, although the terms Syrian and Syriac are strongly accepted by mainstream majority academic opinion to be etymologically, historically, geographically and ethnically derivative of the earlier term Assyrian,[20][21] and historically meant Assyrian (see Etymology of Syria) and 'not' Arab or Aramean. In addition, the Syrian Arab Republic is home to many ethnicities, including Arabs, Assyrians, Armenians, Kurds and Turkmens, and is thus not an exclusively Arab nation.

Chaldean refers to ethnic Assyrians who are (traditionally) Eastern Catholic, having split from the Assyrian Church in Upper Mesopotamia between the 17th and 19th centuries (see Schism of 1552). Chaldean is thus a religious term, not an ethnic term. The majority of Chaldean Catholics come from Iraq’s Nineveh Plains region, which is located in Upper Mesopotamia (northern Iraq). The Chaldeans of antiquity lived in southeast Mesopotamia from the 9th century BC and disappeared from history in the 6th century BC.

On the US census, there is a section for the Assyrian/Chaldean/Syriacs, which is listed separately from Syrian, Syrian being a subcategory for Arab.[24]