AUM was established in 1967 by Act 403 of the Alabama Legislature.[4] The 500 acres of land on which it is built were acquired by McLemore family, descendants of James McLemore, which owned 7000 acres of land farmed first by enslaved people, then by sharecroppers and tenant farmers.[5] In March 1968, Dr. H. Hanly Funderburk, Jr., was appointed vice president and chief administrator of the newly created university. AUM opened its doors in September 1969 with nearly 600 students in the old Alabama Extension Center on Bell Street, next to Maxwell AFB. Two years later, the university relocated to a 500-acre (2.0 km2) campus on the McLemore Plantation tract, 7 miles (11 km) east of downtown Montgomery. The campus' first two buildings were the Administration/Library building and Goodwyn Hall with classrooms and faculty offices.[4]

AUM has been accredited by the Southern Association of Colleges and Schools Commission on Colleges (SACSCOC) as an operationally separate institution from Auburn University since 1978.[4] 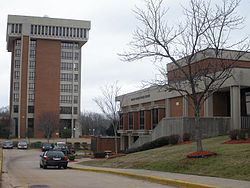 AUM's College of Business ranks in the top 5% of business schools in the world, as accredited by The Association to Advance Collegiate Schools of Business International, and was rated a "Best Business School" by The Princeton Review.[6]

Annual lectures include the Durr Lectures (since 1992), named for Clifford and Virginia Durr, Montgomery lawyers and civil rights activists;[7] and the Ingram Lectures (since 1989),[8] named for Robert Ingram, noted political analyst and journalist.[8]

AUM offers apartment-style residence halls with floor plans including up to four bedrooms. Housing is divided into four communities: P40 Place, The Courtyards, The Commons, and Warhawk Hall. P40 Place, which opened in the Fall of 2016, is named after the P-40 Warhawk aircraft of the World War II era that served as the inspiration for AUM's Curtiss The Warhawk mascot. The Courtyards residence opened in fall 1979 and is made up of seven two-story buildings.[9] In 2003 the eight-story complex known as The Commons, featuring private 4-bedroom suites, was opened,[9] and in fall 2013, Warhawk Hall was opened. Approximately 10 percent to 15 percent of AUM students live on campus during the regular school year.

AUM participated in the NAIA for approximately 30 years. However, AUM has routinely explored possible future participation in NCAA Division II. AUM was accepted into the membership process to NCAA Division II on July 12, 2013, but the decision was then reversed on July 26, 2013.[10] AUM was expected to join the Peach Belt Conference in 2014–15, but this will apparently be set aside with the NCAA's refusal to admit the school.[11] However, the school re-applied and was approved to begin the three-year Division II membership process on July 17, 2015 and will begin the transition beginning with the 2015–16 season, while joining the Gulf South Conference for all sports effective in the 2017–18 season.[12]

On August 18, 2011, AUM officially changed the name of its sports teams from the Senators to the Warhawks.