Ayot St Lawrence is a small English village and civil parish in Hertfordshire, two miles (three kilometres) west of Welwyn.[1] There are several other Ayots in the area, including Ayot Green and Ayot St Peter, where the census population of Ayot St Lawrence was included in 2011.

George Bernard Shaw lived in the village, at Shaw's Corner, from 1906 until his death in 1950; his ashes are scattered there.[2][3] The house is open to the public as a National Trust property.[4]

Other residents of the village included Shaw's friend, neighbour and bibliographer Stephen Winsten (1893–1991) and his wife, the artist Clare Winsten (1894–1989).

The village has a timber-framed public house, The Brocket Arms, which may date back to the early 16th century.[7] It also offers meals and accommodation.[8] 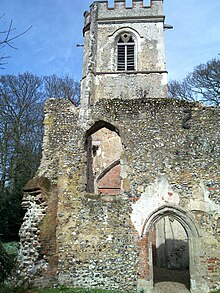 The village has two churches:

Field Marshal Frederick Rudolph Lambart, 10th Earl of Cavan (1865–1946), a British Army officer and Chief of the Imperial General Staff, is buried in the churchyard.[10]