Lagat was born in Kapsabet, Kenya. Prior to his change of domicile to the US, Lagat had an extensive competitive career representing his native country.

Lagat's long-term coach is James Li of the University of Arizona, with whom he has worked for over a decade.

Lagat was born in Kaptel village, near Kapsabet town in Nandi District of Kenya. He is a Nandi, a sub-tribe of the Kalenjin people.[3][4]

He graduated from the Kaptel High School in 1994, where he had started his athletic career. He joined Jomo Kenyatta University of Agriculture and Technology in Nairobi 1996. Later in the same year he moved to Washington State University where other Kenyan athletic greats such as Henry Rono and Michael Kosgei prospered.

In 2000, Lagat graduated from Washington State University with a degree in management information systems.

The next summer, Lagat won the silver medal, behind El Guerrouj, at the 2001 World Championships in Athletics, and later that summer, at a meet in Brussels, Lagat set the Kenyan National Record and became the second fastest individual ever at 1500 m when he ran 3:26.34, finishing second in this race behind Hicham El Guerrouj (3:26.13), in an attempt to break El Guerrouj's world record of 3:26.00. Lagat finished the year ranked #2 in the world at 1500 m.

Lagat spent most of 2002 and 2003 chasing El Guerrouj. At the 2003 IAAF World Indoor Championships, he earned the silver medal at 1500 m, this time behind Driss Maazouzi of France. Lagat withdrew from the 2003 world outdoor championships after a blood test showed traces of EPO in his system. His B sample test came back negative, clearing him of any charges. He was ranked 2nd and 4th in the world at 1500 m in 2002 and 2003 respectively.

In the 3000 m at the 2004 IAAF World Indoor Championships Lagat won his first international gold medal. Lagat was clearly overjoyed at his comeback since 2003. Throughout the spring he competed fiercely and beat his rival El Guerrouj in Zurich with a world leading time at 1500 m of 3:27.40. At the 2004 Summer Olympics Lagat seemed poised to once again defeat El Guerrouj. The final saw Lagat and El Guerrouj battling down the final 100 m, swapping the lead multiple times. El Guerrouj prevailed, with Lagat close behind, earning the silver medal, running the final lap in under 52 seconds. He was, however, ranked #1 in the world at 1500 m for the year.

In March 2005, Lagat announced that he had become a naturalized citizen of the United States on May 7, 2004. Lagat did compete for his homeland Kenya in the 2004 Summer Olympics, winning silver in the 1500 m. Even though Kenya did not allow dual citizenship at the time, he was allowed to keep his medal. Lagat became a competitor for the United States but was temporarily banned from international championship events, missing the IAAF World Championships in Helsinki.

The U.S. does allow dual citizenship and consequently races run by Lagat after May 7, 2004, could have been ratified as American records, since USATF rules only state that an athlete has to be a U.S. citizen competing in a sanctioned competition to be eligible to set a national record. However, at the 2005 USATF annual meeting, his 3:27.40 win in the 1500 meters, on August 6, 2004, in Zurich, was not ratified as an American record.

At the 2007 World Championships in Osaka, Lagat surpassed all his previous achievements by becoming the first athlete to become world champion in both the 1,500 m and 5,000 m at the same IAAF World Outdoor Championships. Similar feats were accomplished by Hicham El Guerrouj at the 2004 Olympics and Paavo Nurmi at the 1924 Olympics.[8][9]

Bernard Lagat at the 2009 World Championships

Lagat had concealed the fact that he was running with an injured Achilles tendon, a problem which hampered his training and contributed to his poor showing at the Olympics. He stated that his placings at the 2008 Beijing Games were "the biggest disappointment in my athletics career". The following season, he began with high altitude training in Flagstaff, Arizona.[22] After tying Eamonn Coghlan's record of seven wins in the Wanamaker Mile at the 2009 Millrose Games in New York, Lagat broke Coghlan's record with an 8th win at Millrose in 2010.[23] As the reigning world champion in the 1500 and 5000 meters, he automatically received qualification in the events at the 2009 World Championships in Athletics and set his sights on retaining his titles. Despite being much older than some of his competitors, Lagat's desire to win had not faded and he said "I am more motivated than ever to go to the podium in Berlin".[22] Lagat ultimately won the bronze medal in the 1500 m and the silver medal in the 5000 m.

Lagat broke his own 5000 m American record in July at the Monaco Diamond League meet by running 12:53.60 to finish a close second behind Mo Farah who set the British 5000 m record in this race in a time of 12:53.11.[26][27][28] The 2011 World Championships in Athletics, the 5000 m final came down to a sprint finish and Lagat was beaten in the last straight by Mo Farah, leaving Lagat with his second consecutive silver medal at the world event. 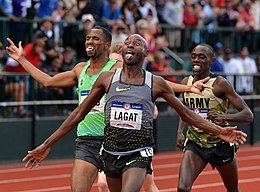 He made his debut at the 10,000 m on 1 May 2016 and came in first. His winning time of 27:49 seconds made an improvement for the world record in the Masters A40 category by 51 seconds.[36] [37] [38] On July 9, Lagat won the 5000 meters at the 2016 United States Olympic Trials, qualifying him for his fifth Olympic Games in Rio de Janeiro. He entered the last lap in sixth place more than two and a half seconds behind race leader Galen Rupp. At age 41, his final lap was 52.82, the fastest of the field and more than a second faster than any in the 1500 meter final. Joining Lagat on the team were Somali born Hassan Mead and Kenyan born Paul Chelimo, making for an entirely foreign born delegation. Lagat also became the oldest runner at the Summer Olympics to represent the United States.[39] On August 20, 2016, Lagat initially claimed the 6th-place finish in the 5000 meters at the Olympics. He was moved to bronze after three runners were disqualified, but was moved back to 5th after 2 of the 3 were reinstated.[40] He outsprinted Andrew Butchart of Great Britain, who is 17 years his junior, by more than a second.

Lagat ran his final race as a professional on September 3, 2016, at the ISTAF meet in Berlin where he came in second place in the 3,000 meters.[41]

In May 2017 Lagat served as a pacer for Nike's Breaking2 attempt at achieving a sub-2-hour marathon time. Lagat also agreed to run as a pacer at a similar event, the Ineos 1:59 Challenge, in October 2019.[42]

Lagat lives in Tucson, Arizona and Tübingen, Germany with his wife Gladys Tom (a Canadian of Chinese descent),[49] whom he met while they both attended Washington State University,[50][51] and their son Miika Kimutai (born in 2006) and daughter Gianna (born 2008).[52]