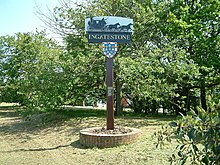 Ingatestone, one of the settlements of the borough

The Borough of Brentwood is a local government district and borough in Essex in the East of England.

Mountnessing, one of the settlements of the borough

The borough is named after its main town of Brentwood. There are still large areas of woodland including Shenfield Common, Hartswood (named after its last private owner, a Mr. Hart), Weald Country Park, and Thorndon Country Park. The original district council was formed in 1974 from the former area of Brentwood Urban District, part of Epping and Ongar Rural District and part of Chelmsford Rural District. By royal charter, the district became a borough on 27 April 1993.

The council has 37 councilors, divided between 15 wards with between 1 and 3 councilors. Following the United Kingdom local elections in 2021 the political composition of Brentwood Borough Council is as follows:[4]

Brentwood is bordered by Epping Forest district (to the north-west), Chelmsford (north-east), Basildon district (south-east), Thurrock (south, aligned with the London, Tilbury and Southend line and the London Borough of Havering (south-west).

The main transport links run in a southwest to north-east direction through the borough with other important links running west to east. Shenfield and Ingatestone provide long-distance trains to Colchester, Ipswich, and other long-distance destinations. However Brentwood is served by TfL-run Elizabeth line trains between London Liverpool Street and Shenfield. Both Brentwood and Shenfield are also served by medium distant trains to Southend Victoria, Southend Airport and Southminster. Also within the borough is West Horndon which provides direct trains to London Fenchurch Street and Southend-on-Sea.

A major artery running through the borough is the A12 dual-carriageway, running from London to Chelmsford, then Colchester, the ports of Harwich and Felixstowe, Ipswich, Lowestoft, and finally Great Yarmouth. The old Roman road (A1023) goes right through the centre of Brentwood and joins the A12 (that bypasses the town) at the far ends of Brentwood. Within different parts of Brentwood, the A1023 is called (from west to east) Brook Street, London Road, High Street, Shenfield Road, and Chelmsford Road. The other main road is the A127 which separates from the A12 near Romford and then proceeds easterly to Southend-on-Sea.

The borough is served by dedicated radio stations, Phoenix FM and Time 107.5.

Civil parishes and settlements in the borough

Brentwood is twinned with Roth bei Nürnberg in Germany and Montbazon in France.