Chorleywood is both a village and a civil parish in the Three Rivers District, Hertfordshire, on the border with Buckinghamshire, approximately 20 miles (32 km) northwest of Charing Cross. The village is adjacent to the Chiltern Hills Area of Outstanding Natural Beauty and is part of the London commuter belt included in the government-defined Greater London Urban Area. Chorleywood was historically part of the parish of Rickmansworth, becoming a separate ecclesiastical parish in 1845 and a separate civil parish in 1898. The population of the parish was 11,286 at the 2011 census.

In 2004 a study by The Social Disadvantage Research Centre at the University of Oxford named Chorleywood as the “happiest place” to live in the UK.[2][3] Of the 32,482 communities surveyed, Chorleywood came out top. More recently, Chorleywood has been ranked as the “least deprived” area in the country by the Department of Communities and Local Government.[4][5] 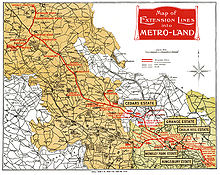 Map of "Metro-land", from the 1924 Metro-land booklet published by the Metropolitan Railway

Settlement at Chorleywood dates to the Paleolithic era when the plentiful flint supply led to swift development of tools by man. The Romans built a village on the ancient site complete with a mill and brewery.[6]

Though variants have been proposed, the name has been derived from the Anglo-Saxon leah, meaning a clearing or a wood, of the ceorla or peasants.[7] A line runs through Chorleywood that once divided the Kingdoms of Mercia and Wessex and now divides the counties of Hertfordshire and Buckinghamshire. Edward the Confessor gave Chorleywood to the Monastery of St Albans.[6]

By 1278, it was known, perhaps duplicating the "woodland" element, as 'Bosco de Cherle' or 'Churl's Wood', Norman for 'Peasant's Wood'.[6] Upon the Dissolution of the Monasteries, it passed to the Bishopric of London, being renamed 'Charleywoode'. It became Crown property during the reign of Elizabeth I. The Turnpike Act (1663) gave Chorleywood a chance to exploit its strategic position, allowing locals the opportunity to charge civilians to use the road from Hatfield to Reading.[6]

Chorleywood is most famous for its Quakers. Non-conformists flocked to Chorleywood, promised sanctuary by the locals. William Penn founded the Pennsylvania Colony with settlers from Chorleywood, Rickmansworth and nearby towns in southern Buckinghamshire, having lived and married in Chorleywood.[6]

Chorleywood House, a Regency mansion, was built in 1822 by John Barnes, replacing an earlier house. John Saunders Gilliat, the Governor of the Bank of England in 1883–1885, lived in it. In 1892, the house was bought by Lady Ela Sackville Russell, eldest daughter of the 9th Duke of Bedford. She modified and enlarged the house turning the grounds into a model estate with market gardens.

In the early 1960s, researchers at the British Baking Industries Research Association in Chorleywood improved upon an earlier American bread-making process. This resulted in the Chorleywood bread process which is now used in over 80% of commercial bread production throughout the UK.[8]

Chorleywood has frequently been used as a filming location. The Royal Masonic School is featured in Indiana Jones and the Last Crusade,[10] while the Black Horse pub is featured in Peep Show.[11] Midsomer Murders, Lewis and Jonathan Creek have also been filmed in Chorleywood.[12] 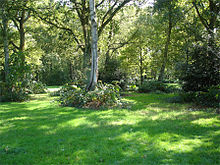 Chorleywood Common is 0.8 square kilometres (200 acres) of wooded common land. The Common is a County Heritage Site, a Conservation Area and a Local Nature Reserve with significant biodiversity and rich in fauna and flora, fungi, birds and wildlife. Since cattle grazing ended soon after the First World War, the land has been used for recreational purposes. Chorleywood Golf Club maintains a nine-hole golf course on the Common; the golf club was founded in 1890 and is the oldest in Hertfordshire.[13]

"Christchurch, the parish church and a local landmark, stands facing the Common on the A404. The original church was built in 1845. When this building became dilapidated it was demolished, with the exception of the tower and was rebuilt and consecrated in 1870. It has a cedar wood tower of unusual design on the flint built west tower."[13]

In the 19th century, the MCC established a cricket pitch on the Common, which is used by Chorleywood Cricket Club's senior and junior teams to this day.

Chorleywood became an urban district itself on 1 April 1913, making it independent of Watford Rural District.[18] The first meeting of Chorleywood Urban District Council was held on 15 April 1913 at the clubhouse of Chorleywood Golf Club on Common Road. Arthur Capell was elected as first chairman of the council.[19] The council generally met at the Golf Club until the Second World War. A council chamber and surveyor's office was incorporated into the Chorleywood Memorial Hall on Common Road, built in 1922, and the council did meet there during 1923 and 1924, but then decided that the meeting room at the Golf Club was preferable and reverted to holding meetings there in 1925.[20][21][22]

Chorleywood Urban District was abolished under the Local Government Act 1972, merging with Rickmansworth Urban District and most of Watford Rural District to form the Three Rivers non-metropolitan district with effect from 1 April 1974. A new Chorleywood Parish Council was created as a successor parish to the former urban district.[24]

The 336 bus route runs via Chorleywood between High Wycombe and Watford.