Claflin University is a private historically black university in Orangeburg, South Carolina. Founded in 1869 after the American Civil War by northern missionaries for the education of freedmen and their children, it offers bachelor's and master's degrees.[2] 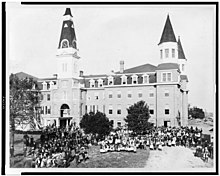 Claflin University was founded in 1869 by Methodist missionaries who freed slaves to take their rightful places as full American citizens.

Claflin is the oldest historically black college or university in South Carolina and touts itself as the first college in the state to welcome all students regardless of race or gender.

The university was named after two Methodist churchmen: Massachusetts Governor William Claflin and his father, Boston philanthropist Lee Claflin, who provided a large part of the funds to purchase the 43-acre (17 ha) campus. Claflin's first president was Dr. Alonzo Webster, a minister and educator from Vermont who had previously spent time as a member of Claflin's board of trustees.

In 2020, MacKenzie Scott donated $20 million to Claflin. Her donation is the largest single gift in Claflin's history.[4]

Claflin has an All-Girl cheerleading team that serves as athletics support and ambassadors of the university.

There are over 50 student organizations on campus.[5]

Claflin graduates who complete the R.O.T.C. program (a cross-enrollment agreement with South Carolina State University) may be commissioned as second lieutenants in the U.S. Army.

The university currently has chapters for eight of the nine National Pan-Hellenic Council organizations.