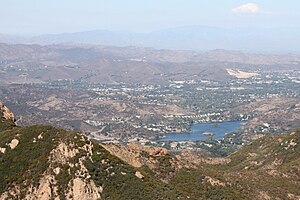 The Conejo Valley is a region spanning both southeastern Ventura County and northwestern Los Angeles County in Southern California, United States. It is located in the northwestern part of the Greater Los Angeles Area.

In 1803, the Spanish land grant in the area was given the name Rancho El Conejo.[citation needed]

In Spanish, conejo means "rabbit", and refers to the rabbits common to the region,[2] specifically the desert cottontail and brush rabbit species.[3] 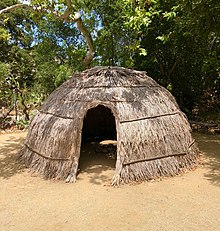 The first human residents of Conejo valley were the native Chumash people. Notable Chumash villages included Satwiwa ("The Bluffs") in Newbury Park, Sap'wi ("House of Deer") in Thousand Oaks, and Hipuk in Westlake Village. Sap'wi (Šihaw Ven-632i) is located near Chumash Indian Museum in Oakbrook Regional Park. This park is also home to 4-6,000 year old pictographs, which can be observed on docent-led tours.[4][5] Satwiwa, which was first settled 13,000 years ago,[6] was located at the foothills of Mount Boney, a sacred mountain to the Chumash people.[7][8][9] The Satwiwa Native American Indian Culture Center is available for visitors.[citation needed]

Two additional Chumash villages were found by Ventu Park Road. These had a population of 100-200 in each village, and were settled around 2,000 years ago.[10][11] These former villages, known as Ven-65, Ven-260 and Ven-261, are located on private lands near Ventu Park Road in Newbury Park.[12] A smaller village, known as Yitimasɨh, was located where Wildwood Elementary School is located today.[13][14] Artifacts retrieved in nearby Wildwood Regional Park include shell beads, arrowheads, and stone tools.[15]

Local villagers' first contact with Europeans came in 1770. The Spanish exploratory party led by Gaspar de Portolá, returning from its journey up the coast as far as San Francisco, entered the valley from the northwest. On the outward bound journey, the explorers had traveled up the Los Angeles River, then north to Castaic Junction, then followed the Santa Clara River back down to the coast. On the return trip, they sought a shorter route to the San Fernando Valley, and were guided by natives up and over the Conejo Grade. Franciscan missionary Juan Crespi kept a diary of the expedition, and gave Conejo Valley one name that survives today – Triunfo (Spanish for "triumph").[16] Crespi gave the name El triunfo del Dulcísimo Nombre de Jesús (in English: The Triumph of the Sweetest Name of Jesus) to a camping place by a creek – today's Triunfo Canyon Road begins between Thousand Oaks and Westlake Village.

Later, explorer Juan Bautista de Anza used Portolá's shortcut on his way north in 1774, mentioning in his diary a stop at "El Triunfo".[17] On de Anza's second expedition (1775–76), diarist Father Pedro Font referred to "many watering places, like those of El Triunfo and Los Conejos".[18]

Harold and Edwin Janss purchased ten thousand acres (40 km²) of land of what is now central Thousand Oaks from the heir of John Edwards, who had purchased the land from the de la Guerra heirs (all of the land was originally a portion of the Rancho El Conejo land grant) in 1910. A ranch, named the Janss Conejo Ranch, was utilized as a farm and to raise thoroughbred horses with the Santa Susanna Mountains and Simi Hills framing it. Television Westerns such as The Rifleman, Gunsmoke, and Bonanza were filmed in Janss Conejo between the 1950s and 1960s. It was also used as the filming locations for Disney's Davy Crockett, King of the Wild Frontier and Westward Ho, the Wagons! both starring Fess Parker.[citation needed]

Conejo Valley seen on a physiographical map of Ventura County.

Conejo Valley is a 900-foot (270 m) high valley.[19][20] The area is bordered by the San Fernando Valley and the city of Los Angeles to the east, Simi Hills to the north, Las Posas Hills and the Santa Rosa Valley to the northwest, Conejo Mountain (also known as Conejo Hills) and Oxnard Plain to the west, and the Santa Monica Mountains to the south. The valley is located in the Santa Monica Mountains on an elevated area.[citation needed]

The Ventura County Star is a daily newspaper published in Camarillo, California and serves all of Ventura County, including the Conejo Valley.[citation needed]

KCLU is the only public radio station in Ventura County.[23][24] 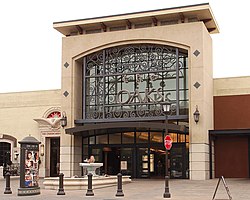 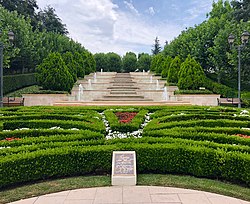 Waterfall at Gardens of the World.

In 2013 the Conejo Valley Tourism Improvement District (CVTID) was formed by the cities of Thousand Oaks and Agoura Hills.[26] CVTID is a non-profit corporation that markets Conejo Valley as a Tourist Destination.[27] Conejo Valley's two largest tourist attractions are the Ronald Reagan Presidential Library in Simi Valley and the Santa Monica Mountains National Recreation Area.[citation needed]