Culver City is a city in Los Angeles County, California, United States. As of the 2020 census, the population was 40,779. Founded in 1917 as a "whites only" sundown town,[7] it is now an ethnically diverse city with what was called the "third-most diverse school district in California" in 2020.[8]

In the 1920s, the city became a center for film and later television production, best known as the home of Metro-Goldwyn-Mayer studios. From 1932 to 1986, it was the headquarters for the Hughes Aircraft Company. National Public Radio West and Sony Pictures Entertainment have headquarters in the city. The city was named after its founder, Harry Culver. It is mostly surrounded by the city of Los Angeles, but also shares a border with the unincorporated area of Ladera Heights. Over the years, it has annexed more than 40 pieces of adjoining land and now comprises about five square miles (13 km2).

Archaeological evidence suggests a human presence in the area of present-day Culver City since at least 8000 BC.[9] The region was the homeland of the Tongva-Gabrieliño Native Americans. For centuries, native people lived in areas currently part of and surrounding Culver City.[10][11][12] California's native people were massacred by waves of Spanish, Mexican and Euro-American invaders through a combination of slavery, disease, relocation, forced labor, imprisonment, broken treaties and a genocidal war of extermination, including paid bounties for dead "Indians".[13] The Spanish and Mexican governments offered concessions and land grants from 1785 to 1846 forming the Ranchos of California. Culver City was founded on the lands of the former Rancho La Ballona and Rancho Rincon de los Bueyes.[14] When Culver City was founded, native, Hispanic or Latino people were not allowed to buy property.[7]

In 1861, during the American Civil War, Camp Latham was established by the 1st California Infantry under Col. James H. Carleton and the 1st California Cavalry under Lt. Col. Benjamin F. Davis. Named for California Senator Milton S. Latham, the camp was the first staging area for the training of Union troops and their operations in Southern California. It was located on land of the Rancho La Ballona, on the south bank of Ballona Creek, near what is now the intersection of Jefferson and Overland Boulevards.[15][16][17] The post was later moved to Camp Drum, which became the Drum Barracks.[18]

Harry Culver first attempted to establish Culver City in 1913. It was officially incorporated on September 20, 1917, and named after its founder.[19] The area benefited from pre-existing transportation links; Culver's first ads read "All roads lead to Culver City".[10] While this slogan might seem welcoming to all, the city was explicitly founded as a whites-only sundown town, as were most of the suburbs and towns outside the downtown and Central Avenue districts of Los Angeles.[20] Culver ran ads promoting "this model little white city", while his close associate, Guy M. Rush, promoted lot sales "restricted to Caucasian race".[21][22] The city also at times excluded people of non-Christian religious faiths.[7]

The weekly Culver City Call was the first newspaper in the community. The paper was founded in 1915.

The first film studio in Culver City was built by Thomas Ince in 1918 for The Triangle Motion Picture Company. Silent film comedy producer Hal Roach built his studios there in 1919, and Metro Goldwyn Mayer (MGM) took over the Triangle studio complex in 1924.[23] During Prohibition, speakeasies and nightclubs such as the Cotton Club lined Washington Boulevard.

Culver Center, one of Southern California's first shopping malls, was completed in 1950[24] on Venice Boulevard near the Overland Avenue intersection. Many other retail stores, including a Rite Aid and several banks and restaurants, have occupied the center since then.[25]

Hughes Aircraft opened its Culver City plant in July 1941. There the company built the H-4 Hercules transport (commonly called the "Spruce Goose"). Hughes was also an active subcontractor during World War II. It developed and patented a flexible feed chute for faster loading of machine guns on B-17 bombers, and manufactured electric booster drives for machine guns. Hughes produced more ammunition belts than any other American manufacturer, and built 5,576 wings and 6,370 rear fuselage sections for Vultee BT-13 trainers.[26][27]

Hughes grew after the war, and in 1953 Howard Hughes donated all his stock in the company to the Howard Hughes Medical Institute. After he died in 1976, the institute sold the company, which made it the second-best-endowed medical research foundation in the world.[28] 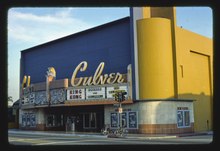 Bicycles parked in front of Culver Theater, Culver City, California, for a 1977 showing of King Kong

The Hal Roach Studios were demolished in 1963. In the late 1960s, much of the MGM backlot acreage (lot 3 and other property on Jefferson Boulevard), and the nearby 28.5 acres (11.5 ha) known as RKO Forty Acres, once owned by RKO Pictures and later Desilu Productions, were sold by their owners. In 1976 the sets were razed to make way for redevelopment. Today, the RKO site is the southern expansion of the Hayden Industrial Tract, while the MGM property has been converted into a subdivision and a shopping center known as Raintree Plaza.

In the early 1990s, Culver City launched a successful revitalization program in which it renovated its downtown as well as several shopping centers in the Sepulveda Boulevard corridor near Westfield Culver City. Around the same time, Sony's motion picture subsidiaries, Columbia Pictures and TriStar Pictures, moved into the Lorimar Studios lot which was renamed Columbia Studios in 1990 and took on its current name, Sony Pictures Studios, a year later.

There was an influx of art galleries and restaurants on the eastern part of the city, which was formally designated the Culver City Art District.[29] 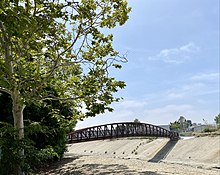 Culver City's major geographic feature is Ballona Creek, which runs northeast to southwest through most of the city before it drains into Santa Monica Bay in Marina Del Rey.

According to the city's 2019–20 Comprehensive Annual Financial Report,[34] the top employers in the city were: 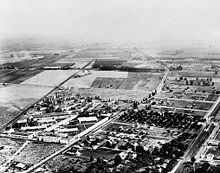 Hundreds of movies have been produced on the lots of Culver City's studios: Sony Pictures Studios (originally MGM Studios), Culver Studios, and the former Hal Roach Studios. In 2017, Amazon Studios announced plans to build a studio in Culver City.[35] 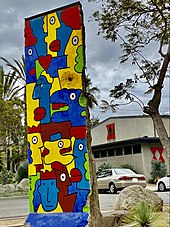 Piece of Berlin Wall outside the Wende Museum

The Wende Museum possesses a collection of Soviet and East German visual art and everyday artifacts to promote an understanding of Soviet art, history and culture between 1945 and 1991.[38]

The architecture of Culver City reflects its history as an early location for film studios and, more recently, as a site for architectural experimentation, particularly for the projects of Eric Owen Moss at the Hayden Tract. The architecture office of Morphosis headquartered here. Styles represented include Mission Revival and Colonial Revival from the city's early days, to the PWA Moderne of the 1930s, to modern, postmodern, and deconstructivist styles from the past few decades. Notable architectural landmarks include:[39] 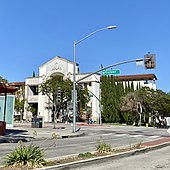 In Los Angeles County, Culver City is in the 2nd Supervisorial District, represented by Holly Mitchell.[44]

In the United States House of Representatives, Culver City is in California's 37th congressional district, represented by Democrat Karen Bass.[46]

Movies filmed or partially filmed in Culver City include:

Television shows filmed or partially filmed in Culver City include:

The Culver City station of the Los Angeles Metro E Line sits at the Culver Junction near Venice and Robertson Boulevards in Culver City. The E Line provides a light rail connection from Culver City to Downtown Los Angeles to the east and Downtown Santa Monica to the west, mostly following the right-of-way that the Pacific Electric Santa Monica Air Line used, also known as the Exposition Boulevard line. Culver City station was the western terminus of what was then known as the Expo Line from its opening on June 20, 2012, to the opening of Expo Line phase two on May 20, 2016.[49] 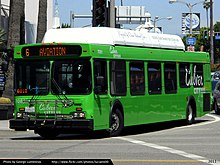 Culver CityBus near Wilshire and Westwood

The Baldwin Hills Parklands Link is a shuttle service operated by Los Angeles County that stops at Stoneview Nature Center on weekends only. 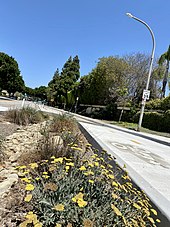 The city is served by multiple separated bike paths:

The city is served by the Los Angeles International Airport, about 7 miles (11 km) south of the city. Smaller nearby airports include Santa Monica Airport and Hawthorne Municipal Airport.