listen)) is a city in the westernmost Austrian state of Vorarlberg. It is the administrative centre for the district of Dornbirn, which also includes the town of Hohenems, and the market town Lustenau.

Dornbirn is located at 437 metres above sea level in the Alpine Rhine Valley, at the foot of the Karren mountain, part of the Bregenz Forest Mountain chain at the edge of the Eastern Alps. It is near the borders to Switzerland, Germany and Liechtenstein. The Dornbirner Ach river flows through the town and later into Lake Constance. 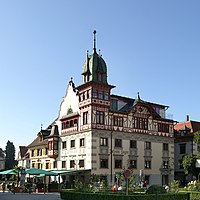 The town of Dornbirn itself constitutes almost 70% of the surface of the district Dornbirn and borders on numerous other municipalities: Hohenems and Lustenau, 15 municipalities of the Bregenz District: (Lauterach, Wolfurt, Schwarzach, Bildstein, Alberschwende, Schwarzenberg, Reuthe, Mellau, Damüls), and four of the Feldkirch District: (Laterns, Zwischenwasser, Viktorsberg, Fraxern). 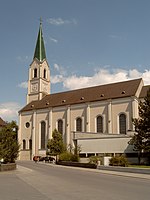 The earliest evidence of human presence in the Dornbirn area dates from the Mesolithic era. The name "Dornbirn" derives from 'torrin puirron', meaning the 'Settlement of Torro' (the name of an Alemannic farmer living there), and thus has nothing to do with "pears" (German "Birnen"), although this fruit is prominently portrayed on the town emblem. 'Torrin puirron' is mentioned for the first time in 895, in a document from St. Gallen (Switzerland).

Dornbirn became part of the Habsburg Monarchy in 1380. In 1793 it was elevated to a market community. It was not given municipal status until 1901. In 1932 the mountain village of Ebnit was annexed. In 1969 Dornbirn became the seat of the new Dornbirn district administrative authority.

1881: the first telephone service in the K&K empire was inaugurated by Emperor Franz Joseph I of Austria on August 10, 1881. 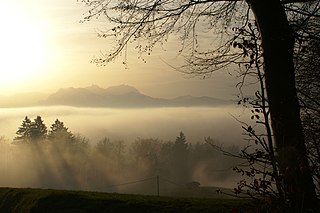 The Dornbirn Municipal Council has 36 seats and the following party mandates:

The current mayor (since 2013) is Andrea Kaufmann (ÖVP). The current vice-mayor is Markus Fäßler (SPÖ). The city council consists of 9 council members (including mayor and vice-mayor). and the following party mandates:

Dornbirn has town partnerships with 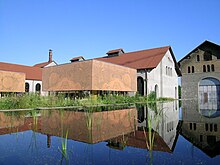 Inatura is an interactive natural history museum. The museum includes a documentation center about nature in Vorarlberg, along with an interactive exhibition.[4]

The Mohren Biererlebniswelt is a beer museum of Vorarlberg's oldest brewery Mohrenbrauerei. It shows traditional brewery equipment and gives insights in the history of beer brewing. Additionally, it hosts workshops on beer.[5]

The Rolls-Royce Museum is a privately-owned automobile museum. It is said to have the world's largest collection of Rolls-Royce cars.[6]

ART BODENSEE is an annual meeting point for artists, art collectors, and connoisseurs. Since 2001, it has included exhibits of works by international artists.[7]

The FLATZ Museum sees itself as a forum concerned with artistic impulses and contemporary cultural positions. It shows changing exhibitions designed by international guest curators, with a focus on photographic art; it organises readings, lecture series, discussions and performances.[8]

Dornbirn's Messestadion is an indoor sporting arena, and home to the local ice hockey team.

An example of modern Vorarlberg architecture is the LifeCycle-Tower ONE (LCT ONE), an innovative architectural project concerned with environmental and energy efficiency. With its eight floors, it is the first modular wooden hybrid complex; it was built in 2012.[9]

Vorarlberg's regional studio of the ORF (Austrian Broadcasting Corporation) is located in Dornbirn.

Zumtobel Group is an ATX traded company, one of many firms based in Dornbirn. The town was formerly a major centre of the textile industry, which suffered a serious decline beginning in the 1980s.

The Mohrenbrauerei August Huber is Vorarlberg's oldest brewery and market leader in the gastronomy and retail sectors.[10] 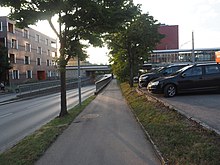 A view of Höchsterstraße in Schoren. The Dornbirn Schoren railway station is visible in the background on the right.

Located in the middle of the Rhine valley, Dornbirn is an important junction of regional and interregional bus lines, connecting Bregenz to the north, Feldkirch to the south, and the Bregenz Forest to the east. The A14 Rheintal motorway (Autobahn) passes by to the west. The Achrain tunnel, opened in 2009, directly connects Dornbirn/Haselstauden with the Bregenz Forest - Alberschwende region. The town has an excellent network of municipal buses.

Dornbirn's railway station is an important stop for all trains between western and eastern Austria.

A small airport is located at nearby Hohenems.

The Vorarlberg University of Applied Sciences (German: Fachhochschule Vorarlberg) was originally founded as a school for technology in 1989. It achieved the status of an officially recognized university in 1999. It currently offers bachelor's and master's degrees in the fields of Business, Engineering & Technology, Design, and Social Work.

Among the most important sports institutions in Dornbirn is the RHC Dornbirn, one of the most powerful Austrian Rink Hockey teams. In 2010 it hosted the 2010 Rink Hockey Men's B World Championship.

The Baseball & Softball Club Dornbirn was founded in 1990, and has won the Austrian national title twice. BSC Dornbirn consists of one youth team, two men's teams, and two women's teams. 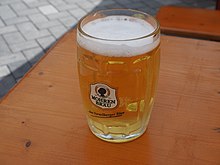 The Mohrenbrauerei was founded in Dornbirn in 1834,[12] which makes it the oldest operating brewery in Vorarlberg.

Dornbirn is twinned with:[13]