South of the Hertfordshire border and M25 motorway, it borders Waltham Cross to the north, Winchmore Hill and Edmonton to the south, Chingford and Waltham Abbey, across the River Lea, to the east and north-east, with Cockfosters, Monken Hadley and Oakwood to the west.

Historically an ancient parish in the Edmonton Hundred of Middlesex, it was granted urban district status in 1894 and municipal borough status in 1955. In 1965, it merged with the municipal boroughs of Southgate and Edmonton to create the London Borough of Enfield, a local government district of Greater London, of which Enfield is the administrative centre.

Enfield Town, a market town chartered by Edward I in 1303, is the commercial centre of Enfield and the location of St Andrew's Enfield, the original parish church. The area is identified in the London Plan as one of 35 major centres in Greater London.[1] The east of Enfield, adjacent to the River Lea and Lee Navigation, is renowned for its industrial heritage. The Royal Small Arms Factory, at Enfield Lock, produced the famous Enfield rifles. The Brimsdown Industrial Estate is home to heavy industry, warehousing and retail, and Wright's Flour Mill, at Ponders End, is Enfield's oldest running industrial building. Forty Hall, on the site of the Tudor Elsyng Palace, is in the north, with Enfield Chase, the former royal hunting ground, and Chase Farm Hospital, in the west. The New River runs through Enfield from north to south, with the bypassed New River Loop encircling the town centre, through Enfield Town Park. 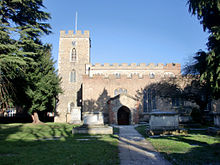 In Anglo-Saxon times, the manor of Enfield was held by Ansgar the Staller, a nobleman and staller to Edward the Confessor. The name 'Enfield' most likely came from Old English Ēanafeld or similar, meaning "open land belonging to a man called Ēana". At the time of the Domesday Book in 1086, the manor of Enfield, spelt 'Enfelde', was the property of Geoffrey de Mandeville, a powerful Norman granted large estates by William the Conqueror.[2] A priest is recorded in the Domesday Book as holding about 30 acres of land in Enfield, leading some to believe a priest may have ministered there at St Andrew's Church in this period, although the earliest written evidence of the parish church in Enfield was when the parish of Enfield, dedicated to St Andrew, and St Andrew's Church, was endowed to the monastery of Walden Abbey in Essex in 1136.[3] In 1303, by charter of Edward I, nobleman Humphrey de Bohun and his heirs were granted a licence to hold a weekly market and two annual fairs, one on St Andrew's Day and another in September. The village green became a marketplace making the town of Enfield (also known today as Enfield Town), at the core of the parish, a market town. The parish was the largest in Middlesex (if excluding from the parish of Harrow on the Hill its Pinner north-west corner, which broke away in 1766); Enfield measured 12,460 acres in 1831, i.e. 19.5 square miles (51 km2).[4]

The parish church, on the north side of the marketplace, is dedicated to St Andrew. There is some masonry surviving from the thirteenth century, but the nave, north aisle, choir and tower are late fourteenth century, built of random rubble and flint. The clerestory dates from the early sixteenth century, and the south aisle was rebuilt in brick in 1824.[5] Adjacent to the church is the old school building of the Tudor period, Enfield Grammar School, which expanded over the years, becoming a large comprehensive school from the late 1960s.

A sixteenth century manor house, known since the eighteenth century as Enfield Palace, is remembered in the name of the Palace Gardens Shopping Centre (and the hothouses on the site were once truly notable; see below). It was used as a private school from around 1670 until the late nineteenth century. The last remains of it were demolished in 1928, to make way for an extension to Pearson's department store, though a panelled room with an elaborate plaster ceiling and a stone fireplace survives, relocated to a house in Gentleman's Row, a street of sixteenth- to eighteenth-century houses near the town centre.[6]

In 1303, Edward I granted a charter to Humphrey de Bohun, and his wife to hold a weekly market in Enfield each Monday, and James I granted another in 1617, to a charitable trust, for a Saturday market.[7] The Market was still prosperous in the early eighteenth century, but fell into decline soon afterwards. There were sporadic attempts to revive it: an unsuccessful one of 1778 is recorded,[8] and in 1826 a stone Gothic market cross was erected, to replace the octagonal wooden market house, demolished sixteen years earlier. In 1858, J. Tuff wrote of the market "several attempts have been made to revive it, the last of which, about twenty years ago, also proved a failure, It has again fallen into desuetude and will probably never be revived".[9]

However the trading resumed in the 1870s. In 1904 a new wooden structure was built to replace the stone cross, by now decayed. The market is still in existence, administered by the Old Enfield Charitable trust.[10]

The charter of 1303 also gave the right to hold two annual fairs, one on St Andrew's Day and the other in September.[11] The latter was suppressed in 1869 at the request of local tradesmen, clergy and other prominent citizens, having become, according to the local historian Pete Eyre, "a source of immorality and disorder, and a growing nuisance to the inhabitants".[12] 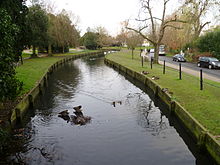 The New River, built to supply water to London from Hertfordshire, runs immediately behind the town centre through the Town Park, which is the last remaining public open space of Enfield Old Park. The Enfield Loop of the New River also passes through the playing fields of Enfield Grammar School, and this is the only stretch of the loop without a public footpath on at least one side of it.

Enfield was the location of some of the earliest successful hothouses, developed by Dr Robert Uvedale, headmaster of both Enfield Grammar School and the Palace School. He was a Cambridge scholar and renowned horticulturalist; George Simonds Boulger writes of Uvedale in the Dictionary of National Biography, 1885–1900, Volume 58:

As a horticulturist Uvedale earned a reputation for his skill in cultivating exotics, being one of the earliest possessors of hothouses in England. In an Account of several Gardens near London written by J. Gibson in 1691 (Archæologia, 1794, xii. 188), the writer says: 'Dr. Uvedale of Enfield is a great lover of plants, and, having an extraordinary art in managing them, is become master of the greatest and choicest collection of exotic greens that is perhaps anywhere in this land. His greens take up six or seven houses or roomsteads. His orange-trees and largest myrtles fill up his biggest house, and … those more nice and curious plants that need closer keeping are in warmer rooms, and some of them stoved when he thinks fit. His flowers are choice, his stock numerous, and his culture of them very methodical and curious.'

The poet John Keats went to progressive Clarke's School in Enfield, where he began a translation of the Aeneid. The school's building later became Enfield Town railway station until it was demolished in 1872. The current building was erected in the 1960s. In 1840 the first section of the Northern and Eastern Railway had been opened from Stratford to Broxbourne. The branch line from Water Lane to Enfield Town station was opened in 1849.

The White House in Silver Street – now a doctors' surgery – was the home of Joseph Whitaker, publisher and founder of Whitaker's Almanack, who lived there from 1820 until his death in 1895. (Inscription on Blue Plaque on The White House, Silver Street, Enfield.)

Enfield Town had the world's first cash machine or automatic teller machine, invented by John Shepherd-Barron. It was installed at the local branch of Barclays Bank on 27 June 1967 and was opened by the actor and Enfield resident Reg Varney.[13] 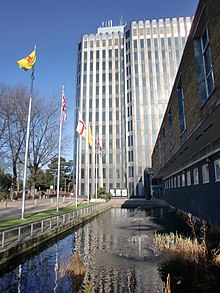 Enfield Town houses the Civic Centre, the headquarters of the Borough administration, where Council and committee meetings are also held.

In the 2011 census, the Town ward (covering areas north from the Southbury Road) was 82% white (68% British, 10% Other, 3% Irish). The largest non-white group, Black African, claimed 3%. The District is also covered by the Chase, Highlands, Grange, Southbury, Lock, Highway, Turkey Street and Bush Hill Park wards. Of these, the Lock ward had the highest minority proportion, 45.1% of its population.[15]

Enfield Lock is the only ward where most houses were rented, 50.1%. At the opposite end, in Bush Hill Park 78.5% of houses were owned by the household.[17] 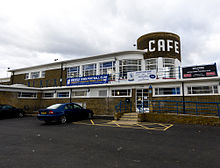 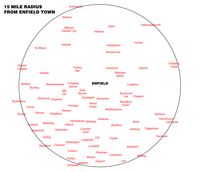 At the centre of Enfield Town is Enfield Town railway station, one of three northern termini of the Lea Valley lines to Liverpool Street in the City of London, with services operated by London Overground. On the Enfield Town branch line between Enfield Town and Edmonton Green is Bush Hill Park.

The Southbury Loop separates from the Enfield Town branch line between Bush Hill Park and Edmonton Green stations, towards Cheshunt. The loop runs through Southbury and Turkey Street stations in Enfield, at which London Overground services between Liverpool Street and Cheshunt call.

Enfield Chase railway station on Windmill Hill, west of the town centre, is on the Hertford Loop line, with services to Moorgate, Hertford North, Watton-at-Stone and Stevenage operated by Thameslink. Also on this line are Crews Hill, Gordon Hill and Grange Park.

Enfield and its clock tower are important locations in the 2016 young adult novel Timekeeper by Tara Sim.

The Enfield poltergeist (a claim of alleged poltergeist activity in Brimsdown, Enfield between 1977 and 1999), was dramatized in the 2016 horror film The Conjuring 2. The story also attracted press coverage in British newspapers, and has been mentioned in books, and television and radio documentaries.