Faulkner University is a private Christian university in Montgomery, Alabama. It is affiliated with the Churches of Christ.

The university was founded in 1942 by Dr. Rex Turner, Dr. Leonard Johnson and Joe Greer as Montgomery Bible School. In 1953 the school's name was changed to Alabama Christian College ('ACC)'. In 1965, the college was moved to its present location on Atlanta Highway. The year 1975 marked the beginning of the school's satellite campuses in Mobile, Huntsville and Birmingham. In 1985, the school was renamed Faulkner University in honor of James H. Faulkner, a longtime supporter and chairman of the board. 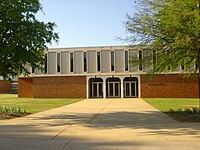 Faulkner University is accredited by the Commission on Colleges of the Southern Association of Colleges and Schools to award associate, baccalaureate, master's, a doctorate in humanities, a doctorate in biblical studies, and juris doctor degrees.[3]

The Faulkner athletic teams are called the Eagles. The university is a member of the National Association of Intercollegiate Athletics (NAIA), primarily competing in the Southern States Athletic Conference (SSAC; formerly known as Georgia–Alabama–Carolina Conference (GACC) until after the 2003–04 school year) for most of their sports since the 1999–2000 academic year; while its football team competes in the Sun Division of the Mid-South Conference (MSC), starting since the 2016 fall season.[5][6]

They were also a member of the National Christian Collegiate Athletic Association (NCCAA), primarily competing as an independent in the South Region of the Division I level; which they won the national championship in baseball in 2001.[7]

Faulkner operates the Thomas Goode Jones School of Law, with between 200 and 300 students.[11][12] The school of law was provisionally accredited by the American Bar Association in 2006, and fully accredited in 2009.[13]

The Kearley Graduate School of Theology, which opened the fall of 2013, offers students Masters of Arts degrees in Biblical Theology,[14] as well as a low-residency PhD in Biblical Studies.[15]

Faulkner University teaches from the canon of literature known as the Great Books of the Western World. Students attending Faulkner University are able to obtain a low-residency master's degree or a PhD in the Humanities through the university's Honors College.[16][17]