Frank Charles Shorter (born October 31, 1947) is an American former long-distance runner who won the gold medal in the marathon at the 1972 Summer Olympics and the silver medal at the 1976 Summer Olympics. His Olympic success, along with the achievements of other American runners, is credited with igniting the running boom in the United States during the 1970s.[2][3][4][5][6]

Frank Shorter was born in Munich, Germany, where his father, physician Samuel S. Shorter, served in the U.S. Army. He grew up in Middletown, New York, where a street was named in his honor (Frank Shorter Way). Frank Shorter Way was formerly part of the Orange Classic 10K course route, which Shorter won in its inaugural race in 1981.[7] After earning his high school diploma from the Mount Hermon School in Gill, Massachusetts, in 1965, Shorter graduated from Yale University in New Haven, Connecticut, with a Bachelor of Arts degree (B.A.) in 1969, and the University of Florida College of Law in Gainesville, Florida, with a Juris Doctor degree (J.D.) in 1974.[8]

In the October 2011 issue of Runner's World, an article by John Brant detailed the traumatic household life Frank and his siblings suffered at the hands of his extremely abusive father and the buckle end of his belt. With the publication of the Runner's World article, Shorter began to elaborate on stopping similar cycles of violence in more detail and in public.[9]

Shorter first achieved distinction by winning the 1969 National Collegiate Athletic Association (NCAA) six mile run title during his senior year at Yale. He won his first U.S. national titles in 1970 in the three mile and six mile events. He also was the U.S. national six mile/10,000 meter champion in 1971, 1974, 1975 and 1977.

After graduating from Yale, Shorter chose to pursue a Doctor of Medicine degree at the University of New Mexico. However, he dropped out after six weeks after classes began to impact his training regime. Soon, he moved to Florida to study for a Juris Doctor degree at the University of Florida in Gainesville because of the excellence of the environment and the opportunity to train with Jack Bacheler as members of the Florida Track Club (FTC), founded by Jimmy Carnes, then the head coach of the Florida Gators track and field team.[10] Bacheler was regarded as America's best distance runner, having qualified for the finals of the 5,000-meter race at the 1968 Mexico City Olympics.[11] The FTC's core nucleus of Shorter, Bacheler and Jeff Galloway qualified for the 1972 Olympics and their success made Gainesville the Mecca of distance running on the East Coast in the early 1970s.[12]

Shorter achieved his greatest recognition in the marathon, and he is the only American athlete to win two medals in the Olympic marathon.[13] At the Munich Games—which coincidentally is Shorter's place of birth— he finished fifth in the 10,000-meter final, breaking the American record for the event that he had established in his qualifying heat.[8] A few days later, he won the gold medal in the marathon. This ultimate achievement was marred by an impostor, West German student Norbert Sudhaus,[14] who ran into Olympic Stadium ahead of Shorter. Shorter was not bothered by the silence from the crowd who had been duped into thinking that he was running for the silver medal. Shorter was confident that he was going to win the gold medal because he knew that no competing runner had passed him.[15] He received the James E. Sullivan Award afterwards as the top amateur athlete in the United States.[8] At the 1976 Summer Olympics in Montreal, Shorter dropped out of the 10,000 meters in order to concentrate exclusively on the marathon, winning the silver medal in the marathon[8] and finishing behind previously unheralded Waldemar Cierpinski of East Germany.[16] Cierpinski was later implicated as a part of the state-sponsored doping program by East German track and field research files uncovered by Werner Franke at the Stasi headquarters in Leipzig in the late 1990s. There were suspicions about other East German athletes during the Montreal Olympics, including the East German women's swimming team led by Kornelia Ender; the East German women won eleven of the thirteen events.[17]

From 2000 to 2003, Shorter was the chairman of the United States Anti-Doping Agency, a body that he helped to establish.[18]

Shorter was featured as a prominent character, played by Jeremy Sisto, in the 1998 film Without Limits. The film follows the life of Shorter's contemporary, training partner, Olympic teammate and sometime rival, Steve Prefontaine.[18] Shorter was the next to last person to see Prefontaine alive before he died in an automobile accident.

A long-time resident of Boulder, Colorado, Shorter co-founded the Bolder Boulder in 1979. The annual 10k race is a popular Memorial Day event, which culminates with a tribute to U.S. Armed Forces at Folsom Field at the University of Colorado. A life-size bronze statue of Shorter stands outside the stadium. 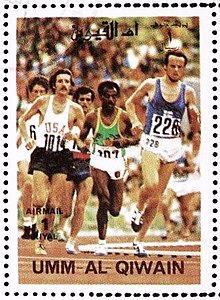