Home > Roald > Bio
Region of Los Angeles County, California, US
This article is about the region in California. For the cities in Massachusetts, see Massachusetts gateway cities. 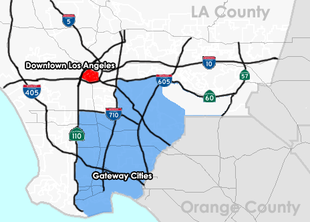 The Gateway Cities, shaded in blue (the boundary is generalized)

The Gateway Cities Region, or Southeast Los Angeles County (also shortened to Southeast Los Angeles and Southeast LA) is an urbanized region located in southeastern Los Angeles County, California, between the City of Los Angeles proper, Orange County, and the Pacific Ocean. The cluster of cities has been termed "Gateway Cities" in that they serve as a "gateway" between the LA and Orange counties, with the city of Cerritos equidistant from Downtown L.A., Long Beach, and Santa Ana in Orange County.[1] As such, the area is central to the Los Angeles-Long Beach-Anaheim, CA Metropolitan Statistical Area (MSA), and has a population of approximately 2,000,000 residents.[2]

Despite a predominating urban fabric of single-family homes and low-rise multifamily residential structures, Southeast LA County comprises some of the most densely populated municipalities in the United States.[3][4] As with other regions of Los Angeles, Southeast LA's demographics are notable for ethnic and age diversity.

The Gateway Cities Council of Governments (GCCOG), the coordinating body for the Southeast LA Region, is located in the city of Paramount.[5]

Area residents generally identify as being part of urban Los Angeles, despite technically living in separate, independent municipalities. The following cities are members of the Gateway Cities Council of Governments,[6] though these cities at times may also be considered part of other LA regions, including the San Gabriel Valley Region, East Los Angeles Region, the South Los Angeles Region, and the Los Angeles Harbor Region.

Also members of the Gateway Cities Council of Governments:

The region hosts the following colleges and universities:

The Port of Long Beach, located in Southeast LA, is the second busiest port in the United States,[8] Significant freight rail infrastructure runs through Vernon, Commerce, Industry, Santa Fe Springs, and Pico Rivera; as well as lines running between the Port of Long Beach and Vernon & Commerce.[9]

Given its high population, Southeast LA is noticeably crisscrossed with regional freeway infrastructure, connecting it to other parts of Greater Los Angeles, Orange County, and the Inland Empire. The following freeways directly service Southeast LA County: