Grass Valley is a city in Nevada County, California, United States. Situated at roughly 2,500 feet (760 m) in elevation in the western foothills of the Sierra Nevada mountain range, this northern Gold Country city is 57 miles (92 km) by car from Sacramento, 64 miles (103 km) from Sacramento International Airport, 88 miles (142 km) west of Reno, and 143 miles (230 km) northeast of San Francisco. As of the 2010 United States Census, its population was 12,860. 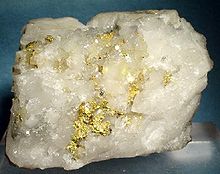 Gold in quartz, from one of the old Grass Valley mines 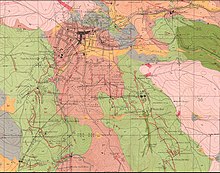 Grass Valley geologic map, and the location of the North Star, Empire, and Maryland mines

Grass Valley, which was originally known as Boston Ravine and later named Centerville, dates from the California Gold Rush, as does nearby Nevada City. Gold was discovered at Gold Hill in October 1850 and population grew around the mine. When a post office was established in 1851, it was renamed Grass Valley the next year for unknown reasons. The town incorporated in 1860.[5]

The essential history of Grass Valley mining belongs to the North Star, Empire and Idaho-Maryland mines, for continuous production over a span of years. From 1868 until 1900, the Idaho-Maryland mine was the most productive in the district. From 1900 until 1925, the North Star and the Empire produced the most gold in the county. In 1932, the Empire and North Star were physically connected at the 4600-foot level and 5300-foot level.[6]

Grass Valley has the Empire Mine and North Star Mine, two of California's richest mines. George Starr, manager of the Empire Mine, and William Bowers Bourn II, the owner, donated mine property which became Memorial Park.[7]: 42  Wiliam Bourn Jr. had taken over management of the Empire Mine in 1878 after his father's death, replacing water power with steam. In 1884, Bourn purchased and rejuvenated the North Star mine. The Idaho and Maryland mines were consolidated by Samuel P. Dorsey in 1893. In 1925, Errol MacBoyle acquired the Idaho-Maryland. By 1938, the Idaho-Maryland was the second largest gold producer in the country. However, gold mining operations in the area ended during WWII, due to War Production Board Limitation Order 208. After the war, renewed operations were attempted, but according to Gage McKinney, "...by the mid-1950s mining was no longer profitable in what had been the richest gold mining district in California."[8][9][10][11]

Many of those who came to settle in Grass Valley were tin miners from Cornwall, United Kingdom. Most arrived between 1860 and 1895, composing three quarters of Grass Valley's population.[12]

Grass Valley still holds on to its Cornish heritage, with events such as its annual Cornish Christmas and St Piran's Day celebrations.[13] Cornish pasties are a local favorite dish with a few restaurants in town specializing in recipes handed down from the original immigrant generation. Grass Valley is also twinned with Bodmin in Cornwall (UK).

There was formerly a (short-lived) Roman Catholic Diocese of Grass Valley[14] in 1868-1884, later relocated in Sacramento (and now a titular see).

The Grass Valley K-Mart store was one of the nation's few remaining still open and the last one in California. It closed in 2021.[15][16]

A variety of igneous and metamorphic rock supports Grass Valley. Granitic rock such as quartz diorite underlies the downtown core and extends south along Highway 49. Metavolcanic rock and diabase underlie areas around the granitic zone. Neighborhoods around Nevada County Golf Course and Sierra Nevada Memorial Hospital are underlain by ultramafic rock[18] which supports infertile soils of the Dubakella series. Here the vegetation is sparse considering the high average annual precipitation, with much grassland, and forested areas are often dominated by several species of oaks and the crooked, thin-crowned gray pine.[19] Luxuriant forest dominated by straight, dense ponderosa pine inhabits the more fertile soils, which include Musick series on granitic rock and Sites series on mafic or metamorphic rock.[20][21]

Grass Valley has a hot-summer Mediterranean climate (Köppen Csa) with warm to hot, dry summers and wet, cool, rainy winters. Summer is very dry, but thunderstorms may occur. Winter rains contribute to a heavy fuel-loading of brush and grass, which dry out during the summer, posing a wildfire hazard. Snow occurs at times. Over the course of a year, 36.4 days of 90 °F (32 °C) or hotter and 0.9 days of 100 °F (38 °C) or hotter occur, with 61.4 days with minimum of 32 °F (0 °C) or colder.[22] 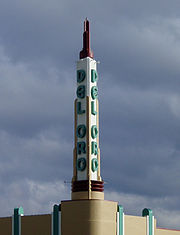 The iconic spire of the Del Oro Theatre

Grass Valley has been a charter city since it was incorporated in 1893. It uses a council-manager form of government.[28]

In the United States House of Representatives, Grass Valley is in California's 1st congressional district, represented by Republican Doug LaMalfa.[31] 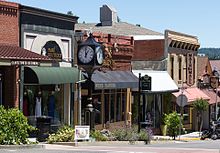 The combined communities of Grass Valley and Nevada City have a fairly diversified economy. The Gold Rush days left a historical legacy and tourism and the related services sector constitute the bulk of the local economy.[32] Many of those who do not commute to the Sacramento Valley work locally in retail, wholesale, trade, engineering, manufacturing, construction, and other businesses, as well in local and state government. A significant number of high-tech electronics companies are in the area.

Another significant sector of the local economy is agriculture, as the soil in Nevada County is quite fertile. Around the time of the Gold Rush, farmers planted orchards, vegetables, and other produce as ranchers brought in cattle, sheep, and other livestock. While the proportion of land dedicated to agriculture has significantly decreased over the last few decades, agriculture continues to be an important aspect of the local economy, including organic agricultural products. Nevada County has also become known for its growing wine industry.[32]

The Grass Valley Group is a media technology research and development company founded in the city in 1959.[34]

Grass Valley is at the intersection of State Route 49 and State Route 20. Public transportation is served by the Gold Country Stage [1] and limited to the urban areas. 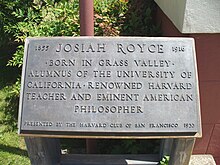 The inscription to Royce at the library