Graveley is a village and civil parish about four miles east of Hitchin and two miles north of Stevenage in Hertfordshire, England. The population of the parish in the 2011 census was 487.[1][2] A milestone in the village states that it is 33 miles from London.[3]

Graveley is mentioned in the Domesday Book. It was granted by William the Conqueror to Goisbert of Beauvais. The village is built on a Roman road, which developed into a section of the Great North Road.[4] The village was by-passed by the A1 (M) motorway in the 1960s. 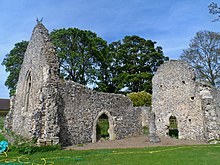 The parish absorbed the site of a lost settlement, Chesfield (or Chivesfield), about a mile to the east of Graveley; little remains there apart from the ruined walls of its 14th-century church, a farm and a couple of cottages.[4] Graveley and Chesfield had been separate parishes, but were united in 1445.[5]

In 1953, the southern part of Graveley parish, including Corey's Mill and the future site of the Lister Hospital was transferred to become part of Stevenage Urban District.[6]

In 2011, Graveley parish ceded some of its territory to became the new civil parish of Great Ashby.[7]

The medieval church is of flint construction. 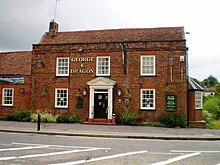 The chequered brick facade of the George and Dragon

There are a number of attractive cottages and houses, including The George and Dragon pub, which has an 18th-century facade,[8] and The Wagon & Horses.[9] At one time there were four pubs, but two have now closed down.