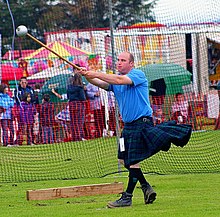 The hammer throw is one of the four throwing events in regular track and field competitions, along with the discus throw, shot put and javelin.

The "hammer" used in this sport is not like any of the tools also called by that name. It consists of a metal ball attached by a steel wire to a grip. The size of the ball varies between men's and women's competitions. 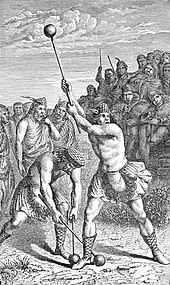 With roots dating back to the 15th century, the contemporary version of the hammer throw is one of the oldest of Olympic Games competitions, first included at the 1900 games in Paris, France (the second Olympiad of the modern era). Its history since the late 1960s and legacy prior to inclusion in the Olympics has been dominated by Europe and Eastern European influence, which has affected interest in the event in other parts of the world.

The hammer evolved from its early informal origins to become part of the Scottish Highland games in the late 18th century, where the original version of the event is still contested today.

The contemporary version of the hammer throw

Although commonly thought of as a strength event, technical advancements in the last 30 years have developed hammer throw competition to a point where more focus is on speed in order to gain maximum distance.[citation needed]

The throwing motion starts with the thrower swinging the hammer back-and-forth about two times to generate momentum. The thrower then makes three, four or (rarely) five full rotations using a complex heel-toe foot movement, spinning the hammer in a circular path and increasing its angular velocity with each rotation. Rather than spinning the hammer horizontally, it is instead spun in a plane that angles up towards the direction in which it will be launched. The thrower releases the hammer as its velocity is upward and toward the target.[2]

The following athletes had their performances (over 77.00 m) annulled due to doping offences: