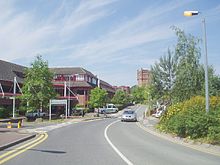 Haywards Heath is a town in West Sussex, England, 36 miles (58 km) south of London, 14 miles (23 km) north of Brighton, 13 miles (21 km) south of Gatwick Airport and 31 miles (50 km) northeast of the county town, Chichester. Nearby towns include Burgess Hill to the southwest, Horsham to the northwest, Crawley northwest and East Grinstead northeast. With only a relatively small number of jobs available in the immediate vicinity, mostly in the agricultural or service sector, many residents work "remotely" or commute daily via road or rail to London, Brighton, Crawley or Gatwick Airport for work.[3]

The first element of the place-name Haywards Heath is derived from the Old English hege + worð, meaning hedge enclosure, with the later addition of hǣð. The place-name was first recorded in 1261 as Heyworth, then in 1359 as Hayworthe, in 1544 as Haywards Hoth (i.e. 'heath by the enclosure with a hedge'), and in 1607 as Hayworths Hethe.[4][5]

There is a local legend that the name comes from a highwayman who went under the name of Jack Hayward.[6][7]

Haywards Heath's Muster Green was the site of the Battle of Muster Green, a minor battle that took place in early December 1642 during the First English Civil War between a Royalist army under Edward Ford, High Sheriff of Sussex, and a smaller (but more disciplined) Parliamentarian army under Herbert Morley. Due to the fact that neither side possessed field guns, hand-to-hand combat ensued and after roughly an hour of fighting and 200 Royalists killed or wounded, the Parliamentarians emerged victorious and routed the Royalist army.[8]

Haywards Heath is located in the east of the ancient parish of Cuckfield. A separate civil parish and urban district of Haywards Heath was created in 1894. From 1934 to 1974 Cuckfield, Haywards Heath and Lindfield were combined to form Cuckfield Urban District,[9] but since 1974 the three settlements have had separate councils again.

Haywards Heath as a settlement is a relatively modern development. Following the arrival of the London & Brighton Railway in 1841, its size has increased considerably. Haywards Heath railway station opened on 12 July 1841 and served as the southern terminus of the line until the completion of Brighton station on 21 September. The position of Haywards Heath, and its place on both this railway and near the main road (A23) between London and Brighton, enables it to function as a commuter town, with many residents working in London, Brighton, Crawley and Gatwick Airport.[3] 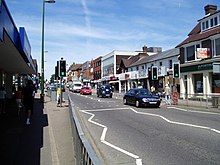 Other noted historical events in the town's history include:

In the 1960s and 1970s, two light industrial estates were built. Office development has lately resulted in the town being a regional or national centre for a number of national companies and government agencies.

The parish church, dedicated to St Wilfrid, and the Roman Catholic church of St Paul are among the churches and chapels in Haywards Heath. Other places of worship include the Methodist church in Perrymount Road and two Baptist churches, St Richards (C of E), the Church of the Presentation (C of E) and the Ascension Church (C of E).

The Priory of Our Lady of Good Counsel on Franklynn Road was built in 1886 and is Grade II listed.[10] In 1978 it was converted to a restaurant and offices.[11] 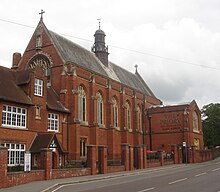 Haywards Heath was in East Sussex, but a change to the county boundary in 1974 brought it under the jurisdiction of West Sussex. The town hall was completed in 1990.[12]

in 1934 the architects Berthold Lubetkin and Tecton obtained planning permission for some modernist style houses. Surprisingly they are built of brick with flat roofs. Seven buildings were built of which a pair were semi-detached. The walls were built of cavity brick walls but certain features were built in concrete- window frames, balconies, built in flower boxes and porches. The houses were originally sold at £975- £1200 each. [13]

Housing in Haywards Heath expanded significantly in the first decade of the 21st century due to the creation of Bolnore Village, located to the southwest of the existing town. Planning permission was first granted in the late 1990s for 780 new homes on a greenfield site. The first house was completed in October 2002. Since then, phases 1, 2, 3, 4a and 5 have been built by the house builders Crest Nicholson in conjunction with several other developers. Housing was followed by the construction of various commercial units currently occupied by the Co-operative Supermarket, TatooFX tattoo artists, the Honeycomb Hair Lounge, and Bolnore Village Primary School, which was the country's first self-governing parent-promoted primary school in September 2010.

The decision to grant planning permission for Bolnore Village was somewhat controversial, since the Ashenground and Catts Woods on that site formed a Site of Nature Conservation Interest (SNCI).

As a condition for planning permission, the developers were required to build a relief road for the town, often referred to as Haywards Heath by-pass, which has rerouted the A272 to the south side of the town. Construction work on the relief road commenced in 2012; on its completion in August 2014, the previous A272 route through Haywards Heath was renumbered the B2272.

In 2008, local residents won a bid to set up and run their own primary school for the village.[14] The new school opened in September 2008.

As Bolnore village's construction has nearly finished the majority of new housing for Haywards Heath has been on the southern side of the A272, the site is commonly referred to as Sandrocks after the house that was previously there. This area has 6 main development areas, of which 2 have been completed as of Summer 2018.

New housing developments have also appeared on the northern side of the town. Both of them allow approx 400 new dwellings to be built. The first one is on the northern end of Penland Road and south of Hanlye Lane and started development in 2017. The other one is between Lindfield and Walstead. This started in 2015 and was due to be completed by the end of 2019. 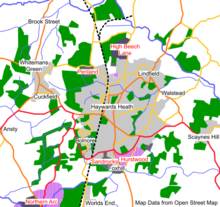 Haywards Heath with surrounding villages and large housing developments in 2018

There are also plans that the land around Hurstwood Farm will be built on, with the provision of a new primary school, Country Park and allotments included in the master plan which has received planning permission.[15]

Haywards Heath is primarily served by the A272 road, which runs around the south side of the town. This is the new Haywards Heath by-pass, which was opened (ahead of schedule) in August 2014. It diverts town centre traffic south of the town, just south of Bolnore Village, Ashenground and the Princess Royal Hospital. The old A272 through the town centre is now the B2272. Following the A272 to the west, it joins the A23 trunk road which runs both to Brighton to the south and London to the north via the M23. 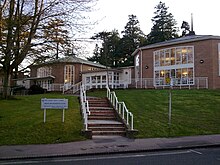 The library in Haywards Heath

Oathall Community College is a secondary school for the town and surrounding area. Facilities include a school farm. There are also several primary schools, for example St Joseph's.

There is also a new Chichester College campus opening September 2020, which will be called Haywards Heath College. The college will use the old Central Sussex College Haywards Heath campus on Harlands Road which closed in Summer 2017.[18] The new principal will be the current Worthing College principal.[19]

Haywards Heath is also home to a number of local primary schools, one of which is St Joseph's Catholic Primary School, located on Hazelgrove Road near the centre of the town.

Haywards Heath is twinned with:

The section of the A272 that runs south beside Bolnore Village has been named Traunstein Way and there is a German postbox outside the Town Hall to commemorate the link.

The area has two hockey clubs nearby: St Francis Hockey Club and Mid Sussex Hockey Club. They both play their home games at The Triangle leisure centre in Burgess Hill, and have a shared clubhouse based in Haywards Heath.[20][21]