The Henry Ford Bridge, also known as the Badger Avenue Bridge, is a bridge located in Los Angeles County, Southern California. It carries the Pacific Harbor Line railroad across the Cerritos Channel to Terminal Island from San Pedro, to serve the Port of Los Angeles and Port of Long Beach. It was built to accommodate operations at the Ford Long Beach Assembly plant which opened in 1930 and was closed in 1959.

The original 1924 bascule bridge was dismantled and replaced in 1996 by a vertical-lift bridge.[1] 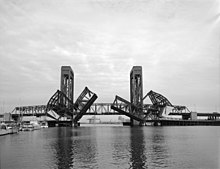 The contract for the bascule bridge was placed by The Los Angeles Board of Harbor Commissioners in 1922. The bridge was designed by Joseph Baermann Strauss and fabricated by the American Bridge Company.[2]