A heptathlon is a track and field combined events contest made up of seven events.[1] The name derives from the Greek επτά (hepta, meaning "seven") and ἄθλος (áthlos, or ἄθλον, áthlon, meaning "competition"). A competitor in a heptathlon is referred to as a heptathlete. 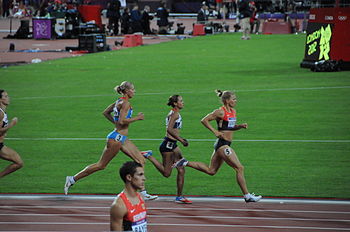 The heptathlon has been contested by female athletes since the early 1980s, when it replaced the pentathlon as the primary women's combined event contest (the javelin throw and 800 m were added).[citation needed] It was first contested at the Olympic level in the 1984 Summer Olympics. In recent years some women's decathlon competitions have been conducted, consisting of the same events as the men's competition in a slightly different order, and World Athletics has begun keeping records for it, but the heptathlon remains the championship-level combined event for women. Nafissatou Thiam, representing Belgium, is the 2020 Olympic Gold Medallist, after successfully defending her 2016 title. She is also the reigning World Champion and European Champion. Katarina Johnson-Thompson, representing Great Britain, is the current Commonwealth Champion. Odile Ahouanwanou. Yekaterina Voronina, Kiara Reddingius, Luisarys Toledo and Ariana Ince hold the African, Asian, Oceanian, South American and NACAC (North American, Central American and Caribbean) titles respectively. Adriana Rodríguez, Marthe Koala, Swapna Barman and Elenani Tinai hold the Panamerican Games, African Games, Asian Games and Pacific Games titles respectively.[2]

There is also a Tetradecathlon, which is a double heptathlon, consisting of 14 events, seven events per day.

The heptathlon scoring system was devised by Dr Karl Ulbrich, a Viennese mathematician. The formulae are constructed so that, for each event, a designated benchmark performance (for example, approximately 1.82 m for the high jump) scores 1000 points.[3] Each event also has a minimum recordable performance level (e.g. 0.75 m for the high jump), corresponding to zero points. The formulae are devised so that successive constant increments in performance correspond to gradually increasing increments in points awarded.

The events are split into three groups, and the scores are calculated according to the three formulae:[4]

P is for points, T is for time in seconds, M is for height or length in centimeters and D is length in meters. a, b and c have different values for each of the events, as follows: 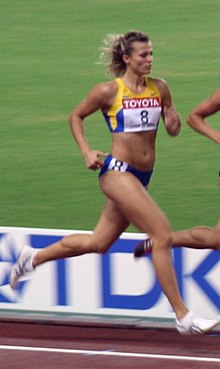 Heptathlon podium at the European Athletics Indoor Championships 2009 in Turin

The other version is an indoor competition, normally contested by men only. It is the men's combined event in the IAAF World Indoor Championships in Athletics. The men's indoor heptathlon consists of the following events, with the first four contested on the first day, and remaining three on day two:

The scoring is similar for both versions. In each event, the athlete scores points for his performance in each event according to scoring tables issued by the International Association of Athletics Federations (IAAF).[8] The athlete accumulating the highest number of points wins the competition.

The following table shows the minimum benchmark levels required to earn 1000 points in each event. 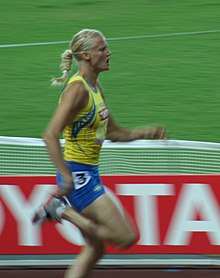 Below is a list of all other scores equal or superior to 6875 pts: 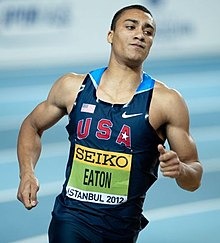 Below is a list of all other scores equal or superior to 6319 pts:

Other multiple event contests include: