Samuel Huston College developed out of an 1876 Methodist Episcopal conference.[5][6] An 1883 agreement with the Freedmen's Aid Society led to the development of the college. The college was named after Samuel Huston of Marengo, Iowa and the college opened in 1900.[5]

Before the merger, future baseball legend Jackie Robinson accepted an offer from his old friend and pastor Rev. Karl Downs [9] who was president of the college, to be the athletic director at Samuel Huston College, then of the Southwestern Athletic Conference (SWAC).[10]

Before joining the Kansas City Monarchs, Robinson coached the school's basketball team for the 1944–45 season. As a fledgling program, few students tried out for the basketball team, and Robinson even resorted to inserting himself into the lineup for exhibition games. Although his teams were outmatched by opponents, Robinson was respected as a disciplinarian coach, and drew the admiration of, among others, Langston University basketball player Marques Haynes, a future member of the Harlem Globetrotters.[10]

HTU offers undergraduate and graduate degrees through the following:

Huston–Tillotson University's campus is located at the site of the former Tillotson College on a land feature formerly known to local residents as Bluebonnet Hill. The 24-acre (9.7 ha) campus is located in East Austin, between seventh and 11th streets near I-35 and downtown Austin. East Austin has historically been the city's designated place for African-American culture and empowerment largely due to Jim Crow segregation laws.[13]

Most of the buildings on campus follow the same nomenclature as the name of the university, with hyphens denoting the importance of the contributions of individuals from both colleges before the merger. 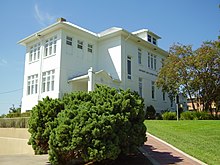 The Anthony and Louise Viaer Alumni Hall (formerly known as the Old Administration Building) is listed on the National Register of Historic Places.

The Huston–Tillotson athletic teams are called the Rams. The university is a member of the National Association of Intercollegiate Athletics (NAIA), primarily competing in the Red River Athletic Conference (RRAC) since the 1998–99 academic year. The Rams previously competed as a founding member of the Southwestern Athletic Conference (SWAC) from 1920–21 to 1953–54 (when it was majority known as Samuel Huston College), which is currently an NCAA Division I FCS athletic conference.