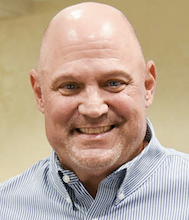 He played Tight End in high school football and attended Kent State University playing football for two and a half seasons. He was but a walk-on to the track team and was known to give his medals away to children who watch the competition, saying "I'm not into collecting or saving medals. Maybe it will mean more to them than it will to me. But it makes me feel good."

He was for a time, the oldest top-level U.S. track star. After turning 40 in 1999, Logan was still determined to continue throwing.

"I'm going to keep throwing until there are three guys who can keep me off the Olympic team. As long as I can make the A standards for the Worlds and Olympics, and keep making teams, I'm going to keep doing it." Following that statement he made his fourth Olympic team and threw in the 2000 Summer Olympics. He had continued throwing into the Masters division, setting the world M50 record in 2009.[3]

Logan resided in Ashland, Ohio,[4] where he coached the Ashland University track team. He became head coach in 2004 and was named Indoor Men's Coach of the Year in the Great Lakes Intercollegiate Athletic Conference in 2008–2009.[5]