Lacrosse at the 1908 Summer Olympics

Lacrosse at the Olympics

A field lacrosse game was played between Canada and Great Britain at the 1908 Summer Olympics. The game was tied 9-9 in the fourth period, before Canada scored 5 straight goals to pull ahead. Canada won 14-10 to earn their second of two gold medals, the only lacrosse gold medals given out in the Olympic Games.[1][2]

The game marked the second appearance of lacrosse at the Olympics, the first being at the 1904 Summer Olympics. Only two teams competed — one fewer than in 1904. South Africa was slated to send a team but then withdrew prior to the tournament.[1]

Both teams held try-outs to select the players to represent their country. The Official Report notes that it was the "first time in the history of Canadian lacrosse a team had been selected from all parts of the Dominion," with players from clubs "as far apart as New Westminster and Montreal."[3] The report also credits the British team as "by far the strongest ever put into the field" by England, though admits the sport was "not yet as well-known as it ought to be on this side of the Atlantic."[3] 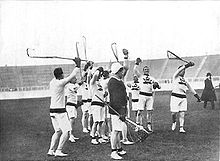 The Canadian team cheering after their win.