Lincoln University (LU) is a public state-related historically black university (HBCU) near Oxford, Pennsylvania. Founded as the private Ashmun Institute in 1854, it has been a public institution since 1972 and is the second oldest HBCU in the state after Cheyney University of Pennsylvania.[5] Its main campus is located on 422 acres near the town of Oxford in southern Chester County, Pennsylvania. The university has a second location in the University City area of Philadelphia. Lincoln University provides undergraduate and graduate coursework to approximately 2,000 students. It is a member-school of the Thurgood Marshall College Fund.

While a majority of its students are African Americans, the university has a long history of accepting students of other races and nationalities.[6] Women have received degrees since 1953,[6] and made up 66% of undergraduate enrollment in 2019.[7]

In 1854, John Miller Dickey, a Presbyterian minister, and his wife, Sarah Emlen Cresson, a Quaker, founded Ashmun Institute, later named Lincoln University, in Hinsonville, Pennsylvania. They named it after Jehudi Ashmun, a religious leader and social reformer. They founded the school for the education of African Americans, who had few opportunities for higher education.

John Miller Dickey was the first president of the college. He encouraged some of his first students: James Ralston Amos (1826–1864), his brother Thomas Henry Amos (1825–1869), and Armistead Hutchinson Miller (1829/30-1865), to support the establishment of Liberia as a colony for African Americans. (This was a project of the American Colonization Society). Each of the men became ordained ministers.

In 1866, a year after the assassination of President Abraham Lincoln, Ashmun Institute was renamed Lincoln University. The college attracted highly talented students from numerous states, especially during the long decades of legal segregation in the South. As may be seen on the list of notable alumni (link below), many furthered their in careers in fields including academia, public service, and the arts. President William Howard Taft gave the commencement address at Lincoln on June 18, 1910.

In June 1921, days after the Tulsa race massacre, President Warren Harding visited Lincoln to deliver the commencement address. He spoke about the need to seek healing and harmony in that incident's aftermath, as well as to honor Lincoln alumni who were part of the 367,000 African American servicemen to fight in World War I. The school newspaper noted Harding's visit as "the high water mark in the history of the institution."[8]

In 1945 Dr. Horace Mann Bond, an alumnus of Lincoln, was selected as the first African-American president of the university. During his 12-year tenure, he continued to do social science research, and helped support the important civil rights case of Brown v. Board of Education, decided in 1954 by the US Supreme Court. His relationship with the collector Albert C. Barnes was essential in ensuring the university's role in the management of his art collection.

The university marked its 100th anniversary by amending its charter in 1953 to permit the granting of degrees to women. True coeducation was slow to arrive, however, and women still constituted only 5% of the student body as late as 1964.[10]

In 1972 Lincoln University formally associated with the Commonwealth of Pennsylvania as a state-related institution.

In November 2014, university president Robert R. Jennings resigned under pressure from faculty, students and alumni after comments relating to issues of sexual assault.[11] Jennings was also the subject of a couple of no-confidence votes by faculty and the alumni association in October 2014.[12]

On May 11, 2017, the Lincoln University board of trustees announced the appointment of Dr. Brenda A. Allen, provost and vice chancellor for academic affairs at Winston-Salem State University as Lincoln's new president. A 1981 alumna of Lincoln, Allen's inauguration was held for October 20, 2017.[13]

In 2020, MacKenzie Scott donated $20 million to Lincoln University. Her donation is the largest single gift in Lincoln's history.[14]

According to U.S. News & World Report, Lincoln University ranks number 19 in the 2020 magazine's ranking of HBCUs.[15] In 2020 the US News & World Best Colleges Report rated Lincoln 119 among Regional Universities North.[16]

The Lincoln-Barnes Visual Arts program is a collaboration between Lincoln University and the Barnes Foundation. It established a Visual Arts program that leads to a Bachelor of Fine Arts, and most recently, a Pan-Africana Studies major has been added to the list undergraduate majors available at the institution.

Dear Lincoln, Dear Lincoln,
To thee we'll e'er be true.
The golden hours we spent beneath
The dear old Orange and Blue,
Will live for e'er in memory,
As guiding stars through life;
For thee, our Alma Mater dear,
We will rise in our might.

For thee, our Alma Mater dear,
We will rise in our might.

For we love ev'ry inch of thy sacred soil,
Ev'ry tree on thy campus green;
And for thee with our might
We will ever toil
That thou mightiest be supreme.
We'll raise thy standard to the sky,
Midst glory and honor to fly.
And constant and true
We will live for thee anew,
Our dear old Orange and Blue.
Hail! Hail! Lincoln. 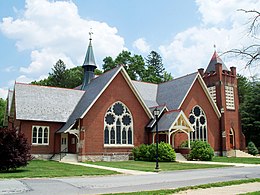 Lincoln University main campus is 422 acres (1.71 km2) with 56 buildings totaling over one million gross square feet. There are fifteen residence halls that accommodate over 1,600 students. The residence halls range from small dorms such as Alumni Hall, built in 1870; and Amos Hall, built in 1902, to the new coed 400-bed apartment-style living (ASL) suites built in 2005. There are additional off-campus housing arrangements such as Thorn Flats, in Newark, Delaware.[17] The campus was listed on the National Register of Historic Places in 2022.[18]

An on-campus football stadium with concession stands, a separate locker room, and storage facilities opened in August 2012. A separate practice field with Field Turf II is located near the Health and Wellness Center, where new[when?] lighted tennis courts are located. New[when?] baseball and softball fields are adjacent to the football stadium.

One of the most visible landmarks on campus is the Alumni Memorial Arch, located at the entrance to the university. The arch was dedicated by President Warren G. Harding in 1921, to honor the Lincoln men who served in World War I.

The Mary Dod Brown Memorial Chapel is the center for campus religious activities. This Gothic structure was built in 1890 and contains a 300-seat main auditorium and a 200-seat fellowship hall. Also located on campus is the Hosanna Meeting House, a small red-brick chapel built for the A.U.M.P. Church in 1845. Hosanna served as a station on the Underground Railroad.

Vail Memorial Hall, built in 1899 and expanded in 1954, served as the library until 1972. The facility houses administrative offices.

The Langston Hughes Memorial Library (LHML): Vail Memorial Library served as the first physical library building on the Lincoln University campus. Its collection outgrew the building's capacity after notable 1929 alumnus and renowned poet, James Mercer Langston Hughes, bequeathed the contents of his personal library to the university upon his death in 1967. Construction of a larger building was underway in 1970. With the help of a $1 million grant from the Longwood Foundation, the new Langston Hughes Memorial Library (LHML) opened in 1972. Total renovation of that building was completed in two phases in 2008 and 2011. The current building consists of 4 levels and houses classrooms, private study rooms, two spacious computer labs, and ample common space in addition to the main stacks and special collection/archive areas. Recent upgrades include new furniture, computers, printing stations, fixed and mobile whiteboards, display cases, and the addition of snack and soda machines. Holdings include over 185,000 volumes and extensive materials representing all aspects of the black experience as well as databases containing in excess of 30,000 journal titles, periodicals, eBooks, and media offerings.[citation needed]

The completely renovated Student Union Building contains the bookstore, café, two television studios, and a radio studio, postal services, and multipurpose rooms. The Thurgood Marshall Living Learning Center, along with the Student Union Building, are the centers for campus social and meeting activities. Marshall graduated in the class of 1930, directed the NAACP's Legal Defense Fund in groundbreaking cases, and was the first African American to be appointed as a justice to US Supreme Court. 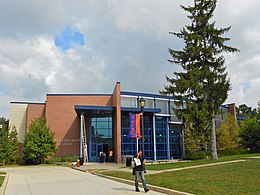 Lincoln has over 60 student organizations as outlets for multiple interests including fashion, arts, social justice, religious, international, cultural, service, leisure, media, and publishing. A complete list of active clubs and organizations can be found at the university's website.[22]

As president of Lincoln University (1945–1957), Dr. Horace Mann Bond formed a friendship with Albert C. Barnes, philanthropist and art collector who established the Barnes Foundation. Barnes took a special interest in the institution and built a relationship with its students. Barnes gave Lincoln University the privilege of naming four of the five directors originally set as the number for the governing board of the Barnes Foundation.[23][24]

Barnes had an interest in helping under-served youth and populations. Barnes intended his $25 billion art collection to be used primarily as a teaching resource. He limited the number of people who could view it, and for years even the kinds of people, with a preference for students and working class. Visitors still must make appointments in advance to see the collection, and only a limited number are allowed in the galleries at one time.

In the mid-20th century, local government restricted traffic to the current campus, located in a residential neighborhood located at 300 North Latch's Lane, Merion, Pennsylvania. Barnes' constraints, local factors, and management issues pushed the Foundation near bankruptcy by the 1990s. Supporters began to explore plans to move the collection to a more public location and maintain it to museum standards. To raise money for needed renovations to the main building to protect the collection, the Foundation sent some of the most famous Impressionist and Modern paintings on tour.

In 2002, the Attorney General of Pennsylvania D. Michael Fisher contested Albert C. Barnes' will, arguing that the Merion location of the collection and small number of board members limited the Foundation's ability to sustain itself financially. Pennsylvania Governor Edward Rendell brokered a settlement in 2005 between the Barnes Foundation and Lincoln University. This agreement resulted in the number of directors increasing. This has diluted Lincoln's influence over the collection, now valued at approximately twenty-five billion dollars.

A documentary named The Art of the Steal depicts the events.

A.^ Founder and President of the Board of Trustees, Ashmun Institute and Lincoln University
B.^ First alumni president and first Black president