Los Angeles City College (LACC) is a public community college in East Hollywood, Los Angeles, California. A part of the Los Angeles Community College District, it is located on Vermont Avenue south of Santa Monica Boulevard on the former campus of the University of California, Los Angeles (UCLA). From 1947 to 1955, the college shared its campus with California State University, Los Angeles (Cal State LA), then known as Los Angeles State College of Applied Arts and Sciences (LASCAAS), before the university moved to its present campus of 175 acres (71 ha) in the northeastern section of the City of Los Angeles, 5 miles (8 km) east of the Civic Center.[3] 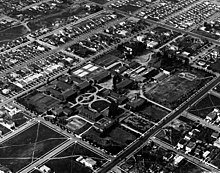 The LACC campus was originally a farm outside Los Angeles, owned by Dennis Sullivan. It is one of nine separate college campuses of the Los Angeles Community College District. When the Pacific Electric Interurban Railroad connected downtown Los Angeles and Hollywood in 1909, the area began to develop rapidly. In 1914, the LA Board of Education moved the teachers' Normal School to the site. The Italian Romanesque campus became the original campus of the University of California, Los Angeles (UCLA) in 1919. In need of more space, UCLA moved to its present location in Westwood in 1929. On September 9, 1929, the campus opened its doors as Los Angeles Junior College with over 1,300 students and 54 teachers. The campus changed its name to Los Angeles City College in 1938.[4]

In 1949, when Howard S. McDonald became president of both Los Angeles State College and Los Angeles City College, they were housed in borrowed spaces with part-time faculty. He hired administrators to help him formally organize the colleges, then found a site within Los Angeles city limits for a permanent campus for Cal State LA. The Los Angeles Board of Education then bought the LACC site for $700,000.