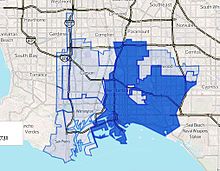 Los Angeles Harbor Region as drawn by the Los Angeles Times. Dark blue is the city of Long Beach.

Cities and neighborhoods within the Harbor Region are:

The wealthiest neighborhood was Lakewood, and the poorest was Wilmington.[4]

Twenty-one percent of all residents aged 25 and older had a four-year degree. Signal Hill had the most post-secondary graduates and Wilmington the fewest.[4]

Rancho Dominguez was the neighborhood with the oldest population, while Hawaiian Gardens was the youngest.[4]

Renters made up 51.7% of the population. The neighborhood with the highest rental rate was unincorporated Santa Catalina Island, while the one with the most homeowners was Rancho Dominguez.[4]