Marion Military Institute is one of only four military junior colleges in the United States.[3] These programs include the Army's two-year Early Commissioning Program (ECP), an Army Reserve Officers Training Corps program through which qualified cadets can earn a commission as a Second Lieutenant after only two years of college.[4] MMI's ECP is one of the country's leading U.S. Army commissioning programs.[2] The Service Academy Program (SAP) is a freshman year of academic and physical preparation for students who wish to attend one of the Service Academies in the United States. It is designated, endorsed, and selected by all five Service Academies.[5] MMI also offers Marine Corps Platoon Leaders Course (PLC) and the first two years of Air Force Reserve Officer Training Corps.[6][7] Over the years, MMI has produced more than 200 generals and admirals in the United States Armed Forces.[8][9]

Marion Military Institute is an Alabama Historical Marker.[12] It is the home of two National Register of Historic Places - The MMI Chapel and Lovelace Hall, and the President's House.[13][14] The Alabama Military Hall of Honor (the Old Marion City Hall), created by executive order of Gov. George Wallace in 1975, is also on campus.[2]

Believed to be J.T. Murfee (middle of the back row) with cadets of B company

Marion Military Institute traces its origins back to 1842 with the creation of Howard College in Marion, Alabama by the Alabama Baptist Convention.[2] During the American Civil War, South Barracks (later known as Lovelace Hall), built in 1854, and the chapel, built in 1857, served the Confederacy as Breckenridge Military Hospital from 1863 to 1865.[2] Along with the President's House (built 1912), these buildings are listed on the National Register of Historic Places.[13][14]

In 1887, the decision was made to move Howard College (now Samford University) to Birmingham. The then President of Howard College, Colonel J. T. Murfee, LL.D.,[15] and a handful of faculty and students decided to remain in Marion, Alabama and immediately reorganized and founded Marion Military Institute, a military preparatory high school and college.[2] It was modeled after Murfee's alma mater - Virginia Military Institute.[2] Although built as a military college, H. O. Murfee, MMI's second president, believed that Marion was destined to become the "American Eton."[16] Under his leadership, MMI achieved national recognition. President William Howard Taft served as President of the board of trustees. Then president of Princeton University, Woodrow Wilson was the guest speaker at the convocation for the class of 1905.[17] However, the plan to pattern the school after Eton College was interrupted by World War I. The military nature of MMI was again emphasized due to the outbreak of the war.[17] In 1916, United States Army ROTC program was first offered at MMI, when the institute was designated as an "Honor Military School with Distinction" by the United States Department of War.[18]

The U.S. Army Early Commissioning Program was established at MMI in 1968 by Park Place.[2] In 1971, MMI became coeducational.[2] In March 2006, the Alabama state legislature passed a resolution placing MMI under the auspices of the Alabama Department of Postsecondary Education. MMI became "the State Military College of Alabama".[2] As part of the transition to a public institution, Marion phased out its high school program. In May 2009, the last high school class graduated from Marion Military Institute's Preparatory School Program, a program that traced its origins back to 1887.

In 2011, an MMI counselor Reginald Marable filed a lawsuit against the school after not being retained. Marable claimed he was harassed and fired for bringing up allegations that the school was discriminating against black students, including the idea that race mixing was forbidden.[19] The United States District Court Southern District of Alabama ruled in the school's favor.[20] In 2014, the plaintiff lost again on appeal, the court noting that racial animus was not a sufficient reason for ruling in the plaintiff's favor.[21] 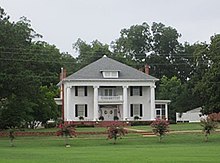 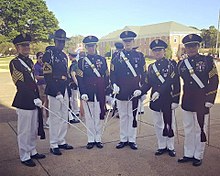 Senior cadets help juniors prepare for their LDAC in 2013.

The Corps of Cadets is organized into a battalion consisting of the Headquarters staff and six companies including Band, A, B, C, D, and E.[17] A cadet lieutenant colonel command and control of headquarters and five companies of cadets as the battalion commander.[17] Each company has a cadet captain commanding, a cadet first lieutenant executive officer, two cadet second lieutenant platoon leaders, a cadet first sergeant, and two cadet sergeant first class platoon sergeants.[17] Each platoon normally has three to four squads and each squad is led by a cadet staff sergeant. Each squad leader has a team leader serving with the rank of cadet sergeant or corporal, depending on experience and ability.[17] 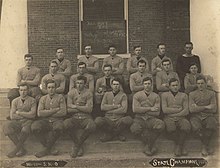 Marion Military Institute athletics is nicknamed "Tigers".[22] It is a member of Alabama Community College Conference (ACCC/Region XXII), which is a part of National Junior College Athletic Association (NJCAA) Division I.[22] Currently, MMI has varsity teams for baseball, men's basketball, softball, tennis, cross country, and golf.[22] The school colors were originally pink and green when established, but they were changed to orange and black following Woodraw Wilson's appearance at the MMI convocation.[17] Marion adopted the tiger as the mascot in tribute to Princeton University.[17]

After 15 consecutive winning games, MMI men's basketball team made history to capture school's first ACCC Basketball Championships in 2015–2016 season.[23][24] They also represented Region XXII at the NJCAA Men's National Basketball Championships, but lost to McLennan Community College (70-78) in the first round.[25] Marion Military Institute men's tennis team showed its dominance in the state of Alabama by holding the NJCAA Region XXII Championship five years in a row from 2011 to 2016.[26] In 2013, the school hired former MLB player Matt Downs as the head coach of the baseball team.[27] In 2016, Christopher Lawrence, former personal trainer of Javier Arenas and Kirani James, became the Marion's cross country coach.[28]

Marion Military Institute also had a football team, which captured the state championship in 1912.[29] On November 28, 1918, MMI earned a 101–0 victory over Howard College Football Team at home. This is MMI Football's largest margin of victory and the second largest margins of defeat in the history of Samford University Football Team.[30] In 1922 season, MMI cadets were defeated 0-110 by the University of Alabama at Tuscaloosa, Alabama in what still stands as the school record for largest margin of victory and as the Crimson Tide's only 100 point game.[31]

16 individuals have served as the president of Marion Military Institute:[32]