This article contains Ethiopic text. Without proper rendering support, you may see question marks, boxes, or other symbols instead of Ethiopic characters.

Mebrahtom "Meb" Keflezighi (/ˈmɛb kəˈflɛzɡi/; Ge'ez: መብራህቶም ክፍልእዝጊ, Mebrāhtōm Kifl'izgī; born May 5, 1975) is a retired Eritrean-born American long distance runner. He is the 2004 Olympic silver medalist in the marathon and finished in fourth place in the 2012 Summer Olympics. He won the 2009 New York City Marathon on November 1, 2009, and the 2014 Boston Marathon on April 21, 2014, becoming the first American man to win each race since 1982 and 1983, respectively. Keflezighi is a graduate of UCLA, where he won four NCAA championships competing for the UCLA Bruins track and field team. He came in fourth in the 2014 New York City Marathon on November 2, 2014, eighth in the 2015 Boston Marathon on April 20, 2015, and second in the 2016 U.S. Olympic Team Trials to qualify for the 2016 Summer Olympics.[4]

Keflezighi and his family were refugees[5] from Eritrea, who came to the United States via Italy in 1987. He is one of ten children.[6]

Meb began running while a student at Memorial Academy in San Diego, where he ran a 5:10 mile before going on to win both the 1600 meters and 3200 meters at the CIF California State Championships in 1994 for San Diego High School.[6][7][8] Keflezighi became a naturalized citizen of the United States in 1998[9] – the same year in which he graduated from UCLA. While at UCLA Keflezighi received numerous All-American awards and other accolades.[10] He won four NCAA championships (the 5k and 10k outdoor and 5 k indoor)[11] during the 1996–97 season, including the cross-country title, spanning from the track and field season in the spring to the cross country season in the fall.[11]

Keflezighi is a three-time national champion in cross country running, having won the USA Cross Country Championships in 2001, 2002 and 2009.[13]

On October 11, 2010, he released his autobiography, Run to Overcome, which was published by Tyndale House Publishers. The book, co-authored with noted sports writer Dick Patrick, included recollections about major milestones in his life, such as his Olympic competitions and other running highlights, as well as his early years, leading up to the present day. He is also the driving force behind the MEB Foundation, the "MEB" standing for "Maintaining Excellent Balance," which principally promotes healthy living, and other positive lifestyle choices and motivation for school-age youth.

Despite his success, Keflezighi's sponsor Nike did not renew his long-running contract in 2011. As a result, Keflezighi competed as an unsponsored athlete. In December 2011, Keflezhigi was signed up by sportswear company Skechers, whom he has represented since.[15] In 2013, Keflezighi signed with elliptical cycling company ElliptiGO.[16] Other current sponsors in 2014 include PowerBar, Sony, Oakley, Inc., Garmin, USANA Health Sciences, Generation UCAN, CEP Compression, New York Athletic Club, and KRAVE Jerky.[17]

At the end of 2014, Meb was selected for the Jesse Owens Award as the USATF Athlete of the Year.[18] 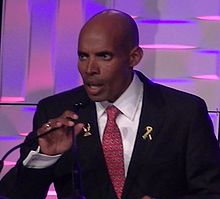 Keflezighi uses nine-day training cycles instead of traditional training weeks, which he says allows him to concentrate on training while also allowing himself to recover.[35] His training is composed of tempo runs, intervals, long runs and cross-training. In the weeks leading up to the 2014 Boston Marathon, he ran 2–3 times a day, and used his ElliptiGO for 10–20 mile cross-training rides to avoid injuries.[36] Additionally, he tries to keep himself healthy with daily core-strengthening exercises, stretching, altitude training, tune-up races, and a high-protein diet with 5 servings of fruit.[35]

Keflezighi lives and trains in Tampa,[41][42] where he moved in 2019 from his long-time home in San Diego.[3] Meb also previously trained in Mammoth Lakes, California,[43] and is a member of the New York Athletic Club.[44]

Keflezighi is represented by his brother Merhawi, who as a UCLA undergraduate was a student manager for the Bruin men's basketball team (head student manager in 2001–02) and is a 2006 graduate of the UCLA School of Law. Meb and his wife Yordanos married in November 2004 and have three daughters: Sara, Fiyori, and Yohana.[45][46]

Keflezighi was recognized as an Outstanding American by Choice by the United States Citizenship and Immigration Services in 2017.[48]