Mexican athletes have won a total of 73 medals with diving as the top medal-producing sport.

Mexico did not win any medals at the Winter Olympics.

Mexico was the first Latin American nation to host the Olympic Games on one occasion.

Enriqueta Basilio lighting the cauldron at the 1968 Mexico City Olympics Opening Ceremony, she was the first woman to do so. 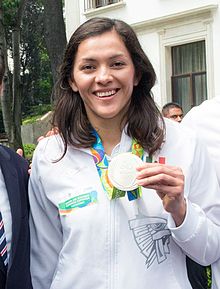 Taekwondo practitioner María Espinoza has won a complete set of medals at the Olympics for Mexico.