Michael Duane Johnson (born September 13, 1967) is an American retired sprinter who won four Olympic gold medals and 8 World Championships gold medals in the span of his career.[2] He formerly held the world and Olympic records in the 200 m and 400 m, as well as the world record in the indoor 400 m. He also once held the world's best time in the 300 m. Johnson is generally considered one of the greatest and most consistent sprinters in the history of track and field.[3][4]

Johnson is the only male athlete in history to win both the 200 meters and 400 meters events at the same Olympics, a feat he accomplished at the 1996 Summer Olympics in Atlanta. Johnson is also the only man to successfully defend his Olympic title in the 400 m, having done so at the 2000 Summer Olympics in Sydney. Aside from his Olympic success, Johnson accumulated eight gold medals at the World Championships and is tied with Carl Lewis for the fourth most gold medals won by a runner.[5][6]

Since 2001, he has worked at the BBC, appearing as a pundit at multiple events. He has been a part of the BBC's Olympics athletics coverage since Athens 2004.[7][unreliable source?]

In 1991 at the World Championships in Tokyo, Johnson earned his first world title by winning the 200 m race by the unusual margin of victory of 0.33 seconds over Frankie Fredericks.

Two weeks before the 1992 Summer Olympics began, Johnson and his agent both contracted food poisoning at a restaurant in Spain.[8] Johnson lost both weight and strength. He was the favorite to win the 200 m going into the Olympics, but he could do no better than sixth in his semifinal heat, and failed to reach the 200 m final by 0.16 seconds. Nevertheless, he was able to race as a member of the 4 × 400 m relay team, which won a gold medal and set a new world-record time of 2:55.74. Johnson ran his leg in a time of 44.73. 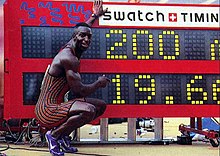 In June 1996, Johnson was 28 when he ran the 200-m in 19.66 seconds at the U.S. Olympic Trials, breaking Pietro Mennea's record of 19.72 seconds that had stood for nearly 17 years. With that performance he qualified to run at the 1996 Summer Olympics in Atlanta and prepared to attempt to win both the 200 meters and 400 meters events, a feat never before achieved by a male athlete.[8] (Two women have won Olympic gold medals in both races in the same year: Valerie Brisco-Hooks in the 1984 Summer Olympics in Los Angeles, and Marie-José Pérec, in the 1996 Olympics in Atlanta.)

Johnson entered the Olympic finals donning a custom-designed pair of golden-colored Nike racing spikes made with Zytel, causing him to be nicknamed "The Man With the Golden Shoes". Sources differ on the exact weight of these shoes; the manufacturer of the spikes claims they weighed 3 ounces (85 g) each,[9] while other sources state each shoe weighed about 94 grams (3.3 oz).[10] The left shoe was a US size 10.5 while the right shoe was a US size 11, to account for Johnson's longer right foot.[9]

On July 29, Johnson easily captured the 400 m Olympic title with an Olympic record time of 43.49 seconds, 0.92 seconds ahead of silver medalist Roger Black of Great Britain. At the 200 m final on August 1, Johnson ran the opening 100 meters in 10.12 seconds and finished the race in a world-record time of 19.32 seconds, breaking by more than three tenths of a second the previous record he had set in the U.S. Olympic Trials, on the same track one month earlier—the largest improvement ever on a 200 m world record. Some commentators compared the performance to Bob Beamon's record-shattering long jump at the 1968 Summer Olympics in Mexico City.[2] During the race, Johnson strained a muscle in his leg, which prevented him from winning his third gold medal of the Olympics in the 4 × 400 m relay as Team USA went on to win the gold even without him.[11]

After the 1996 season ended, Johnson received the James E. Sullivan Award as the top amateur athlete in any sport in the United States,[12] and was named ABC's Wide World of Sports Athlete of the Year. In August, HarperCollins published his biographical/motivational book, Slaying the Dragon: How to Turn Your Small Steps to Great Feats. 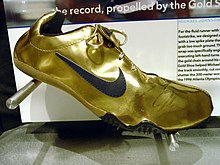 After the end of the 1996 Summer Olympics, American Sportscaster Bob Costas claimed that Johnson was faster than 100m Gold medalist Donovan Bailey Because Johnson's 200m time (19.32 Seconds) divided by 2 (9.66 Seconds) was shorter than Bailey's 100m time (9.84).[13] This started a debate on weather Johnson or Bailey was the real "World's Fastest Man", which in turn resulted in a 150m race between the two, in which Bailey won after Johnson injured his hamstring.[14]

After recovering from the injury, Johnson was able to compete for his third 400 m world title. The IAAF invented a new policy of giving a "bye" to the defending champions essentially to allow Johnson to compete in the IAAF World Championships that year, because Johnson was unable to qualify the conventional method (by competing in the USA Outdoor Track and Field Championships) due to his injury from the race with Bailey.[citation needed] More than a month after the U.S. Championships, Johnson had recovered from his injury and won the 400 meters at the 1997 World Championships in Athens.

Johnson was plagued by injury in 1999, and his following season was troubled with two injury scares that limited him to just four 400 m races before the 1999 World Championships in Seville. Were it not for the IAAF policy established two years earlier for Johnson, that allowed automatic entry to defending champions, he could not have raced in Seville since he failed to compete in the U.S. trials due to his injury. He recovered and won his fourth 400 meter world title with a new world-record time of 43.18 seconds at the relatively late age of 31 years and 11 months, which stood for nearly 17 years before being beaten at the 2016 Olympics by the South African Wayde van Niekerk. Johnson's splits for this world record were 21.22 seconds for the opening 200 meters and 21.96 seconds for the closing 200 meters, giving a differential of 0.74 seconds.

After qualifying for the 2000 Summer Olympics in the 400 m, Johnson sustained an injury in the 200 m final while racing in a highly anticipated matchup against the 100 m and 200 m world champion, Maurice Greene. The injury prevented a defense of his 200 m Olympic title. Johnson ended his career at the Sydney Olympics by winning the gold medal in the 400 m, which brought his total number of Olympic gold medals to four. By winning the 400 m at the age of 33 years 12 days, he earned the distinction of being the oldest Olympic gold medalist at any track event shorter than 5000 m. Johnson was also the anchor of the United States 4x400 relay team along with Alvin Harrison, Antonio Pettigrew, and Calvin Harrison, which originally won the gold medal, but was later stripped of the title after Pettigrew and Jerome Young (who ran in the heats) were found guilty of having used performance-enhancing drugs.

On July 18, 2004, the International Association of Athletics Federations (IAAF) ruled that Jerome Young was ineligible to compete in Sydney and annulled all his past results, including those achieved as part of relay teams. Young had competed for the USA team in the heats and semi-final of this event. Therefore, the United States team was stripped of the gold medal and Nigeria, Jamaica, and the Bahamas were moved up one position each.[17] On July 22, 2005, the Court of Arbitration for Sport (CAS) overturned this decision and restored the original finish order of the race based on a ruling that a team should not be disqualified because of a doping offense by an athlete who did not compete in the finals.[18] Then in June 2008, Antonio Pettigrew "admitted in court he cheated to win" by using banned performance-enhancing substances, and agreed to return his gold medal.[19] Johnson announced that he would return his own gold medal, won as part of the relay team with Pettigrew. Johnson stated that he felt "cheated, betrayed and let down" by what Pettigrew had done at the Games.[20] Pettigrew committed suicide in 2010.

Johnson was elected to the United States Track and Field Hall of Fame in 2004, where his 200 m performance at the 1996 Olympics was named the greatest track and field moment of the last 25 years.[2]

Since retiring from competitive track, Johnson currently works as a television commentator, often for the BBC in the United Kingdom, where he has also written columns for the Daily Telegraph and The Times newspapers. Johnson first appeared for the BBC in 2001 at the World Championships and at the 2002 Commonwealth Games in Manchester.[22][23] He subsequently was part of the BBC's presenting team at the 2004 Olympic Games in Athens, 2008 Olympic Games in Beijing, 2012 Olympic Games in London, 2016 Olympic Games in Rio de Janeiro and 2020 Olympic Games in Tokyo. He was in the BBC commentary booth for the men's 400 meters final in Rio de Janeiro to see his world record broken by Wayde van Niekerk, saying about van Niekerk's performance, "Oh my God! From lane eight, a world record. He took it out so quick. I have never seen anything from 200 to 400 like that. That was a massacre from Wayde van Niekerk. He just put those guys away."[24]

In 2007 Johnson opened Michael Johnson Performance, at McKinney, Texas, a training facility for youth athletes aged 9 to 18 and professional athletes in all sports.[25] The company works with Olympic teams and football clubs and has operations around the world. Michael Johnson Performance currently works with Arsenal, assisting in the development of young players in their academy.[26]

In June 2008, Johnson voluntarily returned the 4 × 400 m relay gold medal he earned in the 2000 Olympics after Antonio Pettigrew, who ran the second leg, admitted he took performance-enhancing drugs between 1997 and 2001.[27] Pettigrew made his admission while giving testimony in the trial of coach Trevor Graham for his role in the BALCO scandal. On August 2, 2008, the International Olympic Committee stripped the gold medal from the U.S. men's 4 x 400-meter relay team.[15] Three of the four runners in the event final, including Pettigrew and twins Alvin and Calvin Harrison, and preliminary round runner Jerome Young, all have admitted or tested positive for performance-enhancing drugs.[15] Only Johnson and Angelo Taylor, who also ran in preliminary rounds, were not implicated.[15] Johnson had already returned his medal because, as he said, he felt the medal was not won fairly.[15]

Johnson appeared as a contestant on NBC's 9th season of The Celebrity Apprentice (2010), placing 10th after exiting the show due to a personal issue on the fifth episode of the season first airing April 11, 2010.

As part of the build-up to the 2012 Summer Olympics, Johnson made a documentary, Survival of the Fastest, for Channel 4 which investigated the dominance of Afro-American and Afro-Caribbean sprinters.[28] The program made the controversial suggestion that a side effect of the slave trade may have been to accelerate natural selection as only the very fittest could survive the brutal process, resulting in a population predisposed to superior athletic performance.

Johnson currently lives in Marin County, California, with his second wife Armine Shamiryan, a chef, and his son Sebastian, born in 2000 during his first marriage to entertainment reporter Kerry D'Oyen.[2][29]

Johnson was one of the Olympic torch bearers in the relay in the run up to the London 2012 Olympics, carrying it to Stonehenge and Salisbury Cathedral in Wiltshire.[30]

In the summer of 2018, Johnson was co-captain and a coach for Godspeed, a flag football team made of former professional American football players that participated in the American Flag Football League (AFFL). The team were crowned the champions of participating pro teams but lost in the final match to the amateur champion team.[31]

In September 2018, Johnson suffered a stroke that affected his left side. By November, he stated he was almost "back to normal", and attributed his successful recovery to the "Olympic mindset".[32][33] In connection with his 54th birthday in 2021, he states that he has fully recovered.[34]