Liberal arts college in Alabama, U.S.
Not to be confused with Miles Community College.

Miles College is a private historically black college in Fairfield, Alabama. Founded in 1898, it is associated with the Christian Methodist Episcopal Church (CME Church) and a member of the United Negro College Fund. 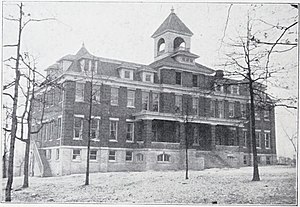 Miles College began organization efforts in 1893 and was founded in 1898 by the Colored Methodist Episcopal Church. It was chartered as Miles Memorial College, in honor of Bishop William H. Miles. In 1941 the name was changed to Miles College.

In January 2020, Charles Barkley, who is an Alabama native, donated $1 million to Miles College, under first female President Dr. Bobbie Knight. Barkley's gift is the biggest donation from a single person that the school has ever received. Dr. Knight said the donation will kickstart efforts to raise $100 million.[3]

Miles is accredited by the Commission on Colleges of the Southern Association of Colleges and Schools (for the awarding of baccalaureate degrees), the Alabama State Department of Education, and the Council of Social Work Education. Miles College offers 25 bachelor's degrees in the following divisions: Business and Accounting, Communications, Education, Humanities, Natural Sciences and Mathematics, Social and Behavioral Sciences. Miles College is one of 41 schools in the nation with a Center of Academic Excellence under the office of the Director of National Intelligence.[4][5][6]

Miles College purchased the Lloyd Noland Hospital site, which more than doubled the size of the campus. The college completed the construction of a new student activity and dining center, a new welcome and admissions center, and a new 204 bed residence hall. Part of the campus is listed on the National Register of Historic Places.[2]

The school operates a radio station, WMWI FM 88.7. It was established in 2009 and is licensed to Demopolis, Alabama.[8]

The Miles College band is known as the Purple Marching Machine (PMM). The Purple Marching Machine was established in 1996, under the direction of Prof. Arthur Means, Jr. There are nearly 200 members in the band now and it is under the direction of Willie Snipes Jr. The band has performed at the Macy's Thanksgiving Day Parade, numerous battle of the bands, and for the Atlanta Falcons. The College most recently made history in 2019 when Hosheria WF Young was appointed the First Female Drum Major in the history of the HBCU. The marching band is accompanied by the Golden Stars danceline and Steaming Flags color guard.[9]