The town most likely was named after the Moorpark apricot, which used to grow in the area (hence the apricot flower on the town's seal and flag).[13] The apricot, in turn, was named for Admiral Lord Anson's estate Moor Park in Hertfordshire, England, the apricot was introduced in 1688.[14][15][16]

Some of Moorpark's previous unofficial and official names include Epworth, Fremontville, Penrose, Fairview, and Little Simi.[12] 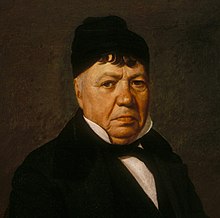 Chumash people were the first to inhabit what is now known as Moorpark. A Chumash village, known as Quimisac (Kimishax), was located in today's Happy Camp Canyon Regional Park. They were hunters and gatherers who often traveled between villages to trade. The village of Quimisac once controlled the local trade of fused shale in the region.[17][18] The area was later part of the large Rancho Simi land grant given in 1795 to the Pico brothers by Governor Diego de Borica of Alta California.

Robert W. Poindexter, the secretary of the Simi Land and Water Company, received the land when the association was disbanded. A map showing the townsite was prepared in November 1900. It was a resubdivision of the large lot subdivision known as Fremont, or Fremontville.[19][20] An application for a post office was submitted on June 1, 1900, and approved by August of that year. The application noted that the town had a railroad depot.[18] The town grew after the 1904 completion of a 7,369-foot (2,246 m) tunnel through the Santa Susana Mountains. Moorpark was then on the main route of the Southern Pacific Railroad's Coast Line between Los Angeles and San Francisco. The depot remained in operation until it was closed in 1958. It was eventually torn down around 1965.

Moorpark was one of the first cities to run off commercial nuclear power in the entire world, and the second in the United States, after Arco, Idaho, on July 17, 1955, which is the first city in the world to be lit by atomic power. For one hour on November 12, 1957, this fact was featured on Edward R. Murrow's See It Now television show.[21] The reactor, called the Sodium Reactor Experiment was built by the Atomics International division of North American Aviation at the nearby Santa Susana Field Laboratory. The Sodium Reactor Experiment operated from 1957 to 1964 and produced 7.5 megawatts of electrical power at a Southern California Edison-supplied generating station.[22]

In February 2005, a Siberian tiger named Tuffy that escaped from a local residence was shot and killed in one of Moorpark's parks. This created a great deal of uproar, because the animal control officers used a gun instead of a tranquilizer to kill the tiger, primarily because the tiger could not be shot from the proper angle for a tranquilizer to prove effective. Candlelight vigils were held for the late Tuffy. The couple who owned the tiger had moved from a licensed facility in Temecula, California, to an unlicensed facility in the Moorpark area of Ventura County. They lost their U.S. Department of Agriculture exhibitor license because they failed to notify the department of the move within 10 days. The wife pleaded guilty to a federal misdemeanor count of failing to maintain records of exotic felines. The husband pleaded guilty to obstruction of justice, making false statements and failing to maintain proper records. Each was sentenced to home detention, three years probation, and fined $900.[23]

Just a month later, in March 2005, the fairly complete remains (about 75%) of an unusually old mammoth, possibly the rare southern mammoth (Mammuthus meridionalis), were discovered in the foothills of Moorpark at the site of a housing development.[24] The fossilized skeleton is believed to be from a 800,000 to 1.4 million years old mammoth, which is estimated to have had a weight of ten tons.[12]

In 2006, the Moorpark city council transferred governance of their library from the Ventura County library system to their own newly created city library system. The library, which opened in 1912, celebrated its centennial in 2012.[25]

In 1961, Julius Goldman founded Egg City, the largest chicken ranch in the United States at the time located just north of Moorpark, California. Many chicken coops were spread over acres of concrete, with millions of chickens in them. Local residents were somewhat irked by the farm, when the smell of it wafted to Moorpark on windy days. The odors also commonly flowed to the nearby town of Fillmore. The business suffered a setback in 1972, when millions of chickens were slaughtered because of the threat of Newcastle disease. Egg gathering was done from 36 houses by hand, with workers placing eggs onto plastic flats while riding electric carts. Liquid, dry and shell eggs were processed at the 8,000 sq ft hatchery facility warehouse with yolk and albumen available in individually. The farm finally closed in 1996. In early December 2006, a wildfire destroyed the dilapidated remains of Egg City.[28] 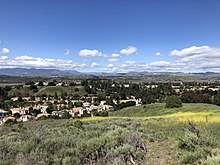 Central Moorpark lies in a valley created by the Arroyo Simi river. It is situated on flatlands and mesas at the base of numerous hills. It is located immediately west of Simi Valley, California.[13][29]

The city is divided by Highway 118, locally known as Los Angeles Avenue. Old Town Moorpark (Downtown) is located north of Route 118. Many newer residential communities can be found south of Route 118.[13]

With its close proximity to Los Angeles, Moorpark too has a Subtropical-Mediterranean climate (Köppen climate classification Csb on the coast, Csb inland), and receives just enough annual precipitation to avoid either Köppen's BSh or BSk (semi-arid climate) classification.

There were 8,994 households, out of which 54.7% had children under the age of 18 living with them, 72.0% were married couples living together, 9.7% had a female householder with no husband present, and 14.4% were non-families. 9.9% of all households were made up of individuals, and 2.2% had someone living alone who was 65 years of age or older. The average household size was 3.49 and the average family size was 3.71.

Several businesses have been opened by celebrity chefs, including Fabio Viviani,[38] a Top Chef "fan favorite," and Damiano Carrara, a third-place finisher on Food Network Star.[39]

According to the City's 2021 Annual Comprehensive Financial Report,[40] the top employers in the city are: 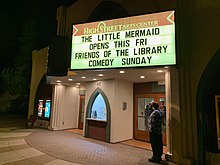 The High Street Arts Center, a theater in downtown Moorpark

A few events are held in the Moorpark area during the year, most notably Moorpark "Country Days", a single day parade and festival in late September or early October, American Civil War battle reenactments in early-November (in 2019 this annual event was cancelled), an "Apricot Festival", usually in the spring or summer, an annual fireworks celebration on the third of July every year, and the Moorpark Film Festival in August. The "Country Days" parade includes various vendors, entertainment, and family friendly games/crafts. Children march with their schools, sports teams, dance companies, etc. Local businesses are also encouraged to march. The July 3rd fireworks are popular around the rest of Ventura County, as people can go to the Moorpark fireworks on the 3rd, and still see their own local city's fireworks on July 4.

The City of Moorpark established an “Arts in Public Places” (AIPP) program in 2005 and later created the Arts Commission in 2006 to support the AIPP efforts.[41] In August 2019, Moorpark engaged the services of ArtsOC to develop an Arts Master Plan. While the initial role of the Arts Commission was to oversee the AIPP program, their role has expanded to include general oversight and implementation of the Arts Master Plan to engage, strengthen, and harness the visual and performing arts in Moorpark.

Park facilities, including picnic pavilions, ball fields, soccer fields, and tennis courts can be reserved for private use.[42]

Additionally, there is The High School at Moorpark College, a middle college located on the Moorpark College campus. In this program, students take English and Social Studies classes at the high school level and Math, Science, Foreign Language and other electives at Moorpark College to fulfill the requirements for graduation and the Associates Degree simultaneously.[46]

SR 118 just before the intersection with SR 23 in Moorpark

Moorpark had the lowest crime rates in Ventura County according to public crime statistics in 2000,[29] and according to Ventura County Sheriff's Department statistics from 2006.[48] The FBI has ranked Moorpark as one of California's safest cities.[49] It was ranked California's 8th safest city in 2017.[50] No homicides were recorded in 2017 nor 2018. The 2018 FBI Uniform Crime Report reported a near record-low crime level.

The City provides a "Volunteers in Policing" (VIP) program that formally engages citizens in supporting the police department and the community that began in 1994.[51] In 1994 the program began with an attempt to open a police storefront run by the Volunteers in policing.[52] Now the volunteers do a wide variety of non-dangerous tasks in an effort to assist the local sheriff's department including: parking enforcement, wellness checks, and traffic enforcement.[51]

A number of movies have been filmed in Moorpark. Kings Row (1942) starring Ronald Reagan featured a scene filmed at Spring Road and Los Angeles Avenue. The film Paranormal Activity 3 has a portion taking place in Moorpark.[18] J.J Gittes (Jack Nicholson) gets shot at an orchard in a scene in Chinatown (1974), which was shot at Trident Ranch.[53] The big game scene in The Best of Times (1986) was shot at Moorpark Memorial High School, while scenes in The Great Man's Lady (1942) were filmed at Joel McCrea's ranch.[54] Scenes from the TV series Super Soul Sunday starring Oprah Winfrey are filmed at Apricot Lane Farms.[55] In 2018, the documentary The Biggest Little Farm was released, telling the story of Apricot Lane Farms.[56] A special, "The Biggest Little Farm: The Return", was released in 2022.[57] The Disney movie Magic Camp has scenes filmed in the High Street Arts Center on High Street.

In 2016, Mike Winters, the Vice President and Historian of the Moorpark Historical Society, published a revised history of Moorpark that covers the years from Moorpark's beginnings to the 1930s. The book, published by Arcadia Publishing is entitled Images of America: Moorpark.