The name "Hadham" probably derives from Old English words meaning "Heath homestead". The affix "Much" comes from the Old English "mycel", meaning "great".[4] The name changed around the time of the Civil War.

Written records of Much Hadham go back to the time of King Edgar. The village was a possession of the Bishops of London before the Norman Conquest, and it appears in the Domesday Book as "Hadham".[7] The parish church was built from 1220–1450. The village was a staging point on the road from London to Cambridge and Newmarket, and the Olde Red Lion Inn, built in 15th century to serve this traffic, still survives in the village.

During the First World War, there was a British Red Cross/Order of St. John auxiliary hospital in Much Hadham.[9] Today, a plaque on the front of Woodham House commemorates this.

During the second world war, Much Hadham was the site of Prisoner of War camp 69.[10] The camp was opened in 1939, housing Italian prisoners of war, and later German prisoners, as well as housing American and Gurkha soldiers as they prepared for the D-Day landings.[citation needed] The camp closed around 1950.[11]

The village is linear stretched along its mile and a half long high street (High Street, Tower Hill and Widford Road) which runs along the river Ash. It is situated between Bishop's Stortford and Ware, about 12 kilometres (7.5 mi) from Hertford and about 40 kilometres (25 mi) north of London. The village had a railway station on the Buntingford single track branch line, which closed in 1965 under the Beeching Axe. 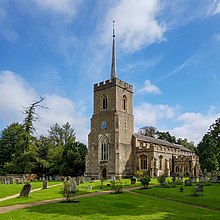 The Henry Moore Foundation can be found in Perry Green, and includes Moore's home. In December 2005, thieves stole a 1970 bronze of a reclining figure from the site,[14] which was melted and sold for scrap metal.[15]

The Red Lion coaching inn, now converted into private houses, has been in the village since the 15th century. It was a stopping point on the old road from London to Cambridge. Legend has it that the inn is connected to St. Andrew's by a tunnel, possibly built during the time of Oliver Cromwell as an escape route for the clergy. This is highly unlikely given the height of the water table.

St Andrew's Church of England Primary School in Much Hadham is a Church of England school with links to the parish church of St Andrew's. It has about 250 pupils between the ages of 4 and 11. The school also has a nursery in the mornings for younger children.[16] A village school has existed in the village since the 1840s. The first now known as the Flint House. A second independent pre prep school in Much Hadham, the Barn School, closed in 1998.[17][18] There is also a pre-school with about 40 children aged between 2 and 4.[19]

Outside the village of Much Hadham in the hamlet of Perry Green there is St. Elizabeth's School and residence for children and young adults with epilepsy, established in 1903, the second largest employer in the District.

Much Hadham has a small museum, The Forge Museum, which contains preserved Elizabethan wall-paintings as well as information about local history. The Henry Moore Foundation in Perry Green houses a large collection of the artist's work.

The village has the charitable Sports Association which runs the publicly owned Recreation Ground and facilities. There is an infants' playground and a newly refurbished sports pavilion completed in 2015, used by the village football team and for social events.

Much Hadham Cricket Club (founded in 1889) withdrew from the Herts & Essex League in 2007 and cricket is now no longer played. The village has a football team and Tennis and Bowls Clubs are open to anyone to join for an annual fee, all on the Recreation Ground.

Adjacent to the church is Much Hadham Palace, a country home of the Bishops of London for 800 years. Edmund Tudor, father of Henry VII, may have been born in the Palace.[20][21] It was sold by the church for the last time in 1888.