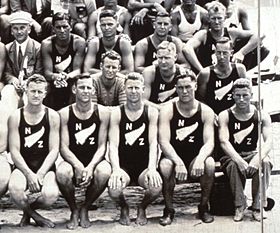 The New Zealand rowing team at the 1932 Summer Olympics

New Zealand first sent an independent team to the Olympics in 1920. Prior to this, at the 1908 and 1912 Summer Olympics, New Zealand and Australian athletes competed together in a combined Australasia team. New Zealand has also participated in most Winter Olympic Games since 1952, missing only the 1956 and 1964 Games.

New Zealand athletes have won a total of 143 medals, with 137 won at the Summer Games and six at the Winter Games. The most successful sports has been rowing with 29 medals, with athletics second with 26 medals. Prior to the 2022 Winter Olympics, the 140 medals won by New Zealand put the country at number 32 on the all-time Olympic Games medal table for total number of medals and number 24 when weighted by medal type.

New Zealand at the Summer Games

The first person from New Zealand to perform at the Olympic Games was Victor Lindberg, who competed for the Osborne Swimming Club of Great Britain which won the Water Polo at the 1900 Summer Olympics.

Due to its location in the South Pacific and distance from the early Olympic host cities in Europe and North America, New Zealanders needed to endure long sea voyages to participate. New Zealand sent its first independent team to the VII Olympiad in 1920, comprising two runners, a rower, and a 15-year-old swimmer. Prior to 1920, three New Zealanders won medals competing for Australasian teams in 1908 and 1912. Since the advent of international jet air travel in the 1950s, and the greater number of Olympic sports, the size of New Zealand Olympic teams has increased substantially.

New Zealand's participation in the 1976 Games was controversial, and led to a boycott of the Games by most African countries, who protested against sporting contacts between the All Blacks and apartheid South Africa.

New Zealand at the Winter Games

New Zealand has had a much smaller participation in the Winter Olympics, owing to its oceanic climate and Southern Hemisphere location requiring athletes to peak in the middle of the New Zealand summer. The nation did not assemble their first Winter Olympic team until 1952. In 1988 the team included bobsleighers; the first entry in a winter sport other than alpine skiing.

In 1992, Annelise Coberger of New Zealand became the first person from the Southern Hemisphere to win a medal at the Winter Olympics when she won silver in the slalom at Albertville in France.