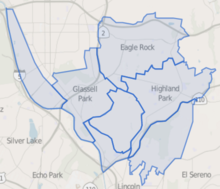 The bulk of the area closer to Pueblo de Los Angeles-Downtown Los Angeles was part of the original Spanish and Mexican land grants of Rancho San Rafael and Rancho San Pascual when the city incorporated in 1850. One of the first annexations of the city was Highland Park in 1895. Other nearby communities attached to Los Angeles were Garvanza (1899), Arroyo Seco (1912) and Eagle Rock (1923). Development in the Northeast was fostered by service of the Los Angeles Railway "Yellow Cars."

Traditionally a heavily Latino and working-class part of the city, Northeast Los Angeles has undergone gentrification starting in the 2000s.[1] With the influx of young professionals, Northeast Los Angeles has gained attention for its hipster culture and a new wave of commercial development; however, increasing housing prices have caused tensions with long-time residents.[1]

Southwest Museum of the American Indian.

Other neighborhoods within the region are:

The area has a relatively large immigrant community, with approximately 38% of the population being foreign-born.

In the 2000 census, Northeast Los Angeles had 167,674 residents in its 17.18 square miles, which amounted to 9,757 people per square mile. The densest neighborhood was Highland Park, and the least dense was Mount Washington.[5]

The area is well-served by freeways and public transportation. California's first freeway, the 1940 Arroyo Seco Parkway (SR 110), connects the area with Downtown and Pasadena. Interstate 5 (the Golden State Freeway) and Interstate 10 (the San Bernardino Freeway) lie directly to the south of the district. 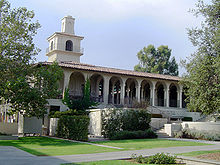 Other regions of Los Angeles County