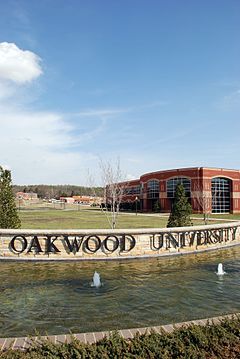 Oakwood University is accredited by the Southern Association of Colleges and Schools (SACS) and the Department of Education of the General Conference of Seventh-day Adventists (through the Adventist Accrediting Association) to award associate, baccalaureate, and master's degrees.

Oakwood University is the only ISO 9001 certified HBCU in the United States.[5]

In 2018, the U.S. Senate recognized Oakwood University for being the fifth leading producer of African-American applicants to U.S. medical schools.[6] That same year, the university became the first academic institution to receive the 2018 Crystal Apple Award from the Partnership for a Healthier America for its campus wellness initiatives.[6][7]

Oakwood University has its origins in the post-Civil and post-slavery effort to fund higher education for African-Americans who had been freed in the South.[8][3] In response to the counsel of SDA Church co-founder Ellen G. White,[3] a committee was appointed by the General Conference of the Seventh-day Adventist Church to buy property and create a school that offers vocational education and spiritual direction to African-American students.[9] In January 1896,[8] the committee bought a 360-acre (1.5 km2) former plantation for $6,700.[10][11] That same year, Oakwood University was founded as Oakwood Industrial School in Huntsville, Alabama, under the authority of the General Conference.[12]

Named for the oak trees surrounding it and the white SDA Church leaders' belief that industrial work is fitting for southern African-Americans,[3] students were initially required to work in industrial positions on-campus to pay for their tuition. Their jobs included machine shop and farm work for male students and print shop, laundry and tailor shop work for female students.[13] Classes commenced in November 1896[10] with 16 students enrolled.[10][12] Solon Marquis Jacobs served as the school's first principal beginning in 1896, and in 1917, James Irving Beardsley was appointed the first president.[8] By that same year, the school offered a theology program as well as a programs for various trades, such as farming, teaching, masonry and pre-nursing.[11][10] Prior to 1917, the school was renamed Huntsville Training School and Oakwood Manual Training School[10] before it became Oakwood Junior College.[12]

Due to the conservative ideologies of the SDA Church, students' initial involvement in the civil rights movement of the 1950s and 1960s was restrained. Oakwood's non-participation stance, declared by the General Conference, discouraged faculty involvement in the movement. Despite this, after Oakwood hosted guest speaker Dr. Martin Luther King, Jr. in 1962—and was the only institution in Huntsville that would host him—some Oakwood students became moderately active in the movement. Because the SDA ideologies discouraged association with those outside of the Church, Oakwood students were disconnected from those at neighboring schools. Also, their access to news outlets such as radio and television was restricted and completely banned in dormitories, limiting their awareness of ongoing events related to the civil rights movement.[3][11][14]

The Church and the South's expectations for women hindered female students' freedom to choose to participate in civil resistance events, if they desired to do so. However, students were able to stay informed of protests through local black-owned radio station WEUP, and male students had more freedom in choosing whether to participate in sit-ins, prayer-ins and marches, store boycotts and other nonviolent acts of resistance. Their efforts to integrate local white SDA churches were met with hostility by segregationists. For example, white church officials called the police to remove black students from the church grounds and altered their worship service times to coincide with students' class times, preventing them from being able to attend. In spite of the SDA Church's efforts against students' activism, a few male Oakwood students formed activist coalitions with Alabama A&M University students or formed their own small activist groups which attempted to obtain service at establishments throughout Huntsville that would only serve white patrons.[3][11][14]

Between 1958 and 1963, Oakwood made progress toward full senior college accreditation by the Southern Association of Colleges and Schools, and joined the United Negro College Fund in 1964.[10][15]

By 2003, Oakwood offered liberal arts and professional degrees, and had an enrollment of approximately 1,700 with representation from 38 countries.[10][15]

In 2016, Oakwood achieved full accreditation by the Adventist Accrediting Association.[6]

In 2009, Oakwood was the first HBCU to enter NASA's Mentor-Protégé signing agreement with SAIC. Through the three-year agreement, SAIC continued to provide Oakwood with technology enhancement, contract management and business administration support and would also begin offering technical and engineering internships to students.[20][18] By 2015, Oakwood had entered into similar contracts with Boeing, Leidos and Honeywell, among others.[19]

There are over 30 clubs and organizations on campus.[21]

The Aeolians, Oakwood University's premier touring ensemble, was founded in 1946 by former professor, Dr. Eva B. Dykes.[22] This choir has 45–60 members from various disciplines, and the group travels nationally and internationally as musical ambassadors for the university. The choir has visited Romania, Great Britain, Poland, Jamaica, and Bermuda among other locations. The group has also performed at the White House for President Bill Clinton and at the Kennedy Center, both in Washington, D.C. The current conductor of the ensemble is Jason Max Ferdinand, M.M., a graduate of Oakwood University and Morgan State University and a former Aeolian. Other musical ensembles on campus include gospel choirs Dynamic Praise, Voices of Triumph, the group Serenity winners of the First Season of "Making The Group" reality show competition. Oakwood University is known for its legacy of great music. In 2010, an Oakwood-based vocal group, Committed, won the a capella TV competition The Sing-off.[23] In 2017, the choir was named Choir of the World at the National Eisteddfod of Wales Music Festival.[6] The group is featured in Jacob Collier's 2019 recording and video of Lionel Richie's song All Night Long (All Night).[24]

At the 2008 Honda Campus All-Star Challenge National Championship Tournament in Orlando, Florida, Oakwood University team members brought home the trophy. This competition featured 64 teams from historically black colleges and universities around the nation. In addition to winning the championship, Oakwood University received a grant of $50,000 from the American Honda Motor Company. Both the quiz bowl and basketball teams adjusted their playing schedules to not play on Saturday, the day observed as the Sabbath (Oakwood University is a Seventh-day Adventist institution), and both teams still emerged as champions over Alcorn State University. At the 2009 Honda Campus All-Star Challenge National Championship Tournament, the team, led by captain Alesis Turner, returned to again be named the champions (the team played in the final rounds against North Carolina Central University). In 2017, Oakwood for the third time won the HCASC Tournament, defeating Bowie State University in the finals without losing a game the entire tournament. 2017 marked the 28th season of the tournament. The school joins Tuskegee University, Florida A&M University, and Morehouse College, as the only schools to win back-to-back championships at HCASC.[25]

Move to the NAIA

On January 20, 2022, Oakwood got an invitation to join the GCAC, along with Wiley College and the return of Southern University at New Orleans, effective beginning in July 2022.[26] The GCAC is an athletic conference affiliated with the NAIA.

Adventist Colleges Abroad is a program that allows Oakwood students to spend time studying at Adventist universities outside of the United States while earning credit for the degree they are pursuing at Oakwood.[32]

Everyone who served between 1896 and 1917 was a principal. Everyone listed afterward was a president.[8]