Pico Rivera is a city located in southeastern Los Angeles County, California. The city is situated approximately 11 miles (18 km) southeast of downtown Los Angeles, on the eastern edge of the Los Angeles basin, and on the southern edge of the area known as the San Gabriel Valley. The ports of Long Beach and Los Angeles, as well as Los Angeles International Airport (LAX), are in close proximity.[9] As of the 2020 United States census,[10] the city has a population of 62,088. Pico Rivera is bordered by Montebello to the west, Downey to the south, Santa Fe Springs to the southeast, and Whittier to the east. 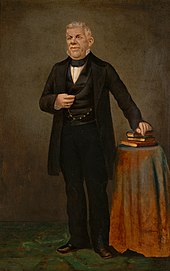 The 1847 Battle of Río San Gabriel was a decisive victory of American forces against the Californios during the U.S. conquest of California.

Pico Rivera was founded in 1958, from the merger of the long-standing unincorporated communities of Pico (named for Pío Pico, the last Mexican governor of California) and Rivera (the Spanish word for "riverbank"). Situated on a rich alluvial plain between the Rio Hondo and the San Gabriel River, the area was once predominantly agricultural; but, at the end of WWII, the fast rising demand for homes lured builders to the attractive terrain.[11] Since the 1950s, it has been both residential as well as industrial. It had a Ford Motor Company plant for many years: Los Angeles Assembly. Pico Rivera lies below the Whittier Narrows, making it one of the "Gateway Cities".[12]

In January 1958, 56 percent of the electorate voted for incorporation. They approved a Council-Manager form of government, and the name "Pico Rivera" was established for the new city. Five citizens were chosen from a slate of 24 candidates to serve as members of the first City Council; Pico Rivera officially became the 61st city in Los Angeles County.[11]

The north side of the city is home to the Pico Rivera Sports Arena, where concerts and other events are held.[13]

There are nine parks and eight playgrounds throughout the city, including Smith Park on Rosemead Boulevard, Rivera Park on Shade Lane, Pico Park on Beverly Boulevard, Rio Vista Park, and Stream Land Park at the north end of Durfee Road. The community enjoys more than 120 acres committed to public recreational facilities.[14] There are 18 athletic fields, two gymnasiums and four community centers, a nine-hole executive golf course, skatepark and aquatic center.[15]

In 1965, the Pico Rivera Municipal Golf Course was built for the communal enjoyment of not only its residents and golfers, but also for those in the surrounding communities. The executive nine-hole course plays to a par 29 and measures 1,504 yards. The practice facilities include two putting greens and a covered driving range. Lighting throughout the golf course and driving range enables play and practice until 10:00 p.m.[15]

Pico Rivera's Congressional Representative, Grace Napolitano, helped with the funding, and city officials launched a newly renovated senior center that includes a high-tech computer lab with 16 computers and a modern dance room. Funded by the U.S. Department of Housing and Urban Development and the city's general fund, the US$350,000 renovation of the over 20-year-old center "is an example of your tax dollars at work," Napolitano told a crowd of local officials and residents, who toured the new facility. Napolitano secured a $198,000 federal grant for the project and the city contributed $157,000 in federal stimulus funds. The fitness room has 18 exercise machines, a set of free weights and two 40-inch flat screen TVs. The activity room has a mirrored wall with a ballet barre and a state-of-the-art sound system. The billiard room, which is a popular part of the senior center, was relocated to larger quarters within the center. Since August 24, 2010, it has housed four new pool tables.[16] The Pico Rivera Center, 9200 Mines Avenue, is open from 8 a.m. to 5 p.m. Monday through Thursday and 8 a.m. to 3 p.m. Friday.

In the United States House of Representatives, Pico Rivera is in California's 38th congressional district, represented by Democrat Linda Sánchez.[16][24]

As of 2021, the city council comprised Mayor Dr. Monica Sánchez, Mayor Pro Tem Erik Lutz, Councilmembers Gustavo V. Camacho, Andrew C. Lara, and Raul Elias.[27] The city has a council/city manager form of government. The title of Mayor is a ceremonial position that is changed each year within the council.

There was a 157-acre (0.64 km2) manufacturing facility located at the corner of Rosemead and Washington boulevards, which was owned and operated by the Ford Motor Company called Los Angeles Assembly. The plant opened in 1958 and closed in 1980 and was purchased by Northrop Grumman in 1982 for its Advanced Systems Division.[28] Upon the unveiling of the B-2 Spirit bomber in 1988, it was revealed that much of the development for the former black project had in fact occurred at the site. In the early 1990s, the division was renamed the B-2 Division to reflect its most famous product. At its peak, the project employed approximately 13,000 workers in Pico Rivera.[29] The site was closed and then demolished in 2001 partially due to air quality remediation efforts, and is now a large retail center.

There has been significant redevelopment in the city: the opening of the "Pico Rivera Towne Center"", a 60-acre open-air shopping complex along Washington Boulevard, that has brought in such well-known businesses as Starbucks, Petsmart, Lowe's, Walmart, Walgreens, Del Taco and other businesses into the city.[30]

"Pico Crossing" is a 2.79-acre shopping center with retailers that include Rite-Aid Pharmacy, Starbucks, and Subway. Noteworthy redevelopment has taken place in recent[when?] years along historic Whittier Boulevard, bringing in such businesses as Target and Panda Express.[30] More developments include the "Pico Rivera Village Walk", a $22 million, 12-acre shopping center located at the southwest corner of Whittier and Paramount boulevards. Tenants: CVS Pharmacy, Cinepolis USA Theaters, are located at the corner of Paramount and Whittier Boulevards.[30] A state-of-the-art LA Fitness, which is part of an 8.10-acre "Pico Rivera Market Place Shopping Center" with a Sexy Nails, Wing Stop, Chase Bank, Juice It Up and other businesses have opened at the corner of Washington and Rosemead Boulevards.[30] The cities taxes were raised from 10.25 percent to 10.75 percent in mid 2009.[31]

According to the city's 2019 Comprehensive Annual Financial Report,[32] the top employers in the city are:

According to the city's 2009 Comprehensive Annual Financial Report,[33] the top employers in the city were:

One of Pico Rivera's chief attractions to residents and businesses is its central location. It is highly accessible via several freeways, the San Gabriel (605), Santa Ana (5) and the Pomona (60). Public transportation is provided by the Metropolitan Transit Authority (MTA) and Montebello Bus Lines. The MTA website also provides maps of bus and train routes. Information about Montebello Bus Lines schedule is available at City Hall or at hyperlink. Dial-a-Ride service is available to elderly (over 55 years old) and disabled residents.[34]