A place from which a geological material has been excavated from the ground
For other uses, see Quarry (disambiguation).
Not to be confused with Query. 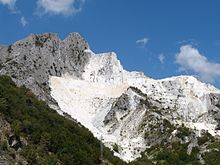 A quarry at Carrara in Tuscany, Italy 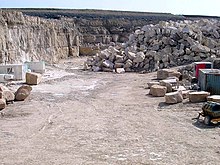 A Portland stone quarry on the Isle of Portland, England 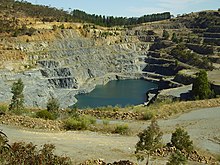 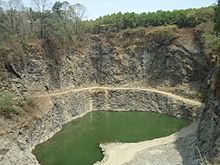 A quarry is a type of open-pit mine in which dimension stone, rock, construction aggregate, riprap, sand, gravel, or slate is excavated from the ground. The operation of quarries is regulated in some jurisdictions to reduce their environmental impact.[1][2]

The word quarry can also include the underground quarrying for stone, such as Bath stone.

Types of rock extracted from quarries include: 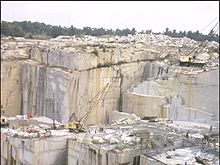 For thousands of years, only hand tools had been used in quarries. In the 18th century, the use of drilling and blasting operations was mastered.[3]

The method of removal of stones from their natural bed by using different operations is called quarrying. Methods of quarrying include:

Following steps are used in the blasting process;

Many quarry stones such as marble, granite, limestone, and sandstone are cut into larger slabs and removed from the quarry. The surfaces are polished and finished with varying degrees of sheen or luster. Polished slabs are often cut into tiles or countertops and installed in many kinds of residential and commercial properties. Natural stone quarried from the earth is often considered a luxury and tends to be a highly durable surface, thus highly desirable.

Extraction work in a marble quarry in Carrara, Italy

Quarries in level areas with shallow groundwater or which are located close to surface water often have engineering problems with drainage. Generally the water is removed by pumping while the quarry is operational, but for high inflows more complex approaches may be required. For example, the Coquina quarry is excavated to more than 60 feet (18 m) below sea level.

To reduce surface leakage, a moat lined with clay was constructed around the entire quarry. Groundwater entering the pit is pumped up into the moat. As a quarry becomes deeper, water inflows generally increase and it also becomes more expensive to lift the water higher during removal; this can become the limiting factor in quarry depth. Some water-filled quarries are worked from beneath the water, by dredging.

Many people and municipalities consider quarries to be eyesores and require various abatement methods to address problems with noise, dust, and appearance. One of the more effective and famous examples of successful quarry restoration is Butchart Gardens in Victoria, British Columbia, Canada.[4]

A further problem is pollution of roads from trucks leaving the quarries. To control and restrain the pollution of public roads, wheel washing systems are becoming more common.

Many quarries naturally fill with water after abandonment and become lakes. Others are made into landfills.

Water-filled quarries can be very deep, often 50 ft (15 m) or more, and surprisingly cold, so swimming in quarry lakes is generally not recommended. Unexpectedly cold water can cause a swimmer's muscles to suddenly weaken; it can also cause shock and even hypothermia.[5] Though quarry water is often very clear, submerged quarry stones, abandoned equipment, dead animals and strong currents make diving into these quarries extremely dangerous. Several people drown in quarries each year.[6][7] However, many inactive quarries are converted into safe swimming sites.[8][9]

Such lakes, even lakes within active quarries, can provide important habitat for animals.[10]