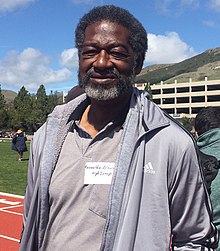 Reynaldo Brown (born December 6, 1950 in Los Angeles, California) is an American track and field athlete, known for the high jump. He competed in the 1968 Summer Olympics at the beginning of his senior year in high school, finishing fifth.[1] His participation in that transitional event had him witnessing teammate Dick Fosbury winning the gold medal using the Fosbury Flop, leaving Brown as one of the last successful jumpers to use the straddle technique.

While at Compton High School, Brown won the CIF California State Meet three straight times, after being overshadowed by teammate Bill Morris as a freshman.[2] He was the first high school athlete to jump seven feet.[3] He was invited to that year's Semifinal Olympic Trials, an elimination event. Finishing fourth he qualified to the Olympic Trials at Echo Summit. Brown had to defeat another high school phenom, John Hartfield to make the team, ultimately finishing second behind another Californian Ed Caruthers, the future silver medalist and ahead of Fosbury. Brown returned to school late in the term after his Olympic adventure. 2 months behind, he had to study hard to catch up. By February, he led his Compton team to the CIF State basketball championship.[4] He was Track and Field News "High School Athlete of the Year" in 1968.[5]

Brown continued his education at Cal Poly, San Luis Obispo. While at Cal Poly, he won two NCAA Division II National Championships, which qualified him to compete and also win the Division I National Championship each of those years. In the process he set the NCAA Small School, Cal Poly school and National Collegiate record at 7'4" in 1973. In 1993, he was inducted into the Cal Poly Athletics Hall of Fame.[6]

In November 2015, Brown received the Athletes in Excellence Award from The Foundation for Global Sports Development, in recognition of his community service efforts and work with youth.[9]

Brown had a kidney transplant and credits his athletic conditioning to his recovery and survival.[10]

In February 2017, Brown, who is also a photographer, got his works displayed through the Art of the Olympians.