This article is about the Italian city. For the composer, see Vittorio Rieti.
Not to be confused with the Rietti family.
Comune in Lazio, Italy

Rieti (Italian: [ˈrjɛːti]; Latin: Reate, Sabino: Riete) is a town and comune in Lazio, central Italy, with a population of 47,700. It is the administrative seat of the province of Rieti and see of the diocese of Rieti, as well as the modern capital of the Sabina region.

The town centre stands on a small hilltop, commanding from the southern edge the wide Rieti valley, at the bottom of the Sabine hills and of monti Reatini, including mount Terminillo. The plain was once a large lake, drained by the ancient Romans, and is now the fertile basin of the Velino River. Only the small Ripasottile and Lungo lakes remain of the larger original.

Map showing the extension of the ancient lake which once occupied the Rieti valley; in darker blue, modern date rivers and lakes.

According to the legend, Reate was founded by Rea, a divinity (that would be the origin of the town name). It was founded at the beginning of the Iron Age (9th–8th century BC).

Probably in earlier times the lands around Rieti were inhabited by Umbri, then by Aborigines and later on by Sabines, who reached the lands sited in the nearby of Tevere river.

Reate was originally a major site of the Sabine nation well before the foundation of Rome. According to the legend, when Romulus founded Rome, Romans kidnapped Sabine women in order to populate the town (The Rape of the Sabine Women) and this led to a war between Romans and Sabines. The battle of the Lacus Curtius came to an end only when the women threw themselves between the armies, begging the men who were by then their relatives to stop fighting. Romulus and Titus Tatius relented and a collaboration between the two people started. According to an account more based on history, Sabines settled on the Quirinale because of their continuous need for grazing-lands.

After the final Roman conquest, carried out by Manius Curius Dentatus in the early third century BC (290 BC), the village became a strategic point in the early Italian road network, dominating the "salt" track (Via Salaria) that linked Rome to the Adriatic Sea through the Apennines. Many lands of Reate and Amiternum were confiscated and allocated to Romans. From the outset, Sabines were offered Roman citizenship but without voting rights, until in 268 BC they gained full citizenship, and were incorporated into two new tribes (Velina and Quirina).

Remains of the Roman bridge (3rd century BC)

Curius Dentatus drained a large portion of the lake by diverting the Velino river into the Nera (thus giving birth to Marmore Falls). The wide area once occupied by the lake turned into a fertile plain (the Rieti Valley). Following Roman customs, the land was split into characteristic square allotments. The town itself underwent significant development, being re-organised according to typical Roman urban standards (e.g., two crossed roads make up the settlement's backbone), and was fortified with strong walls. A stone bridge was laid across the Velino river, and a large viaduct was built to bring goods from the Via Salaria directly to Rieti's southern gate.

Roman Reate receives a number of mentions in Latin literature, thanks to its flourishing soil, its valued assets, and some peculiarities of the surroundings (such as wandering islands and hollow-subsurfaced fields). Cicero, for instance, describes the tensions between Reate and Interamna (Terni) following the lake drainage, and refers to the country house (villa) that his friend Q. Axius owned in the plain.[3]

One of the most important Sabine families that gained success in Rome was the Gens Flavia, from which Emperor Titus Flavius Vespasianus (who started the building of the Colosseum, also known as the Amphitheatrum Flavium) descended.

The Reatin poet and writer Marcus Terentius Varro was born in 116 BC and he is usually referred to as the father of Roman erudition.

After the fall of the Western Roman Empire Rieti suffered destruction by Barbarians, but never ceased to be an important gastaldate during the Lombard domination, as part of the Duchy of Spoleto. Under the Franks, it was the county capital. It was sacked by the Saracens in the ninth and tenth century and by the Norman king Roger II of Sicily in 1149.

The city was rebuilt with the help of the Roman comune, and from 1198 was also a free commune, of Guelph orientation, with a podestà of its own.

As a favourite Papal seat, Rieti was the place of important historical events: Constance of Hauteville married here by proxy Emperor Henry VI (1185). Charles I of Anjou was crowned King of Apulia, Sicily and Jerusalem by Pope Nicholas I in 1289. Pope Gregory IX canonized St. Dominic in Rieti (1234).

After the Papal seat had been moved to Avignon, Rieti was conquered by the King of Naples, while inner struggles between Guelphs and Ghibellines broke out. In 1354 it was won back by Cardinal Albornoz, and it later became a feudal seigneury of the Alfani family within the Papal States. More of the surrounding plain was drained in the following century, but this led to confrontation with the neighboring Terni.

Rieti was province capital of the Papal States from 1816 to 1860. After the unification of Italy, it was initially part of Umbria, being annexed to Lazio in 1923. It became the provincial capital on January 2, 1927. 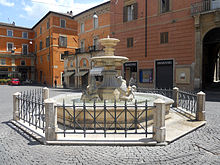 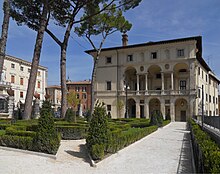 Loggia and gardens of Palazzo Vincentini. 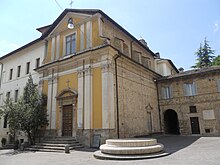 San Rufo church, in the square considered the centre of Italy. 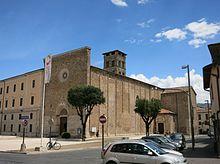 The ancient Sabine and Roman city was crowded with buildings, including baths (thermae). Only scarce remains were found during excavations in 19th and 20th century: the foundations of a large temple, the stone floor of the main square (forum), walls from private houses, concrete vaults, statues and pottery items. The most striking remains are the stone bridge across the Velino river and the viaduct.

Piazza San Rufo is traditionally considered to be the exact centre of Italy (Latin Umbilicus Italiae).

Vaults of Palazzo Vescovile, also known as the Papal Palace. 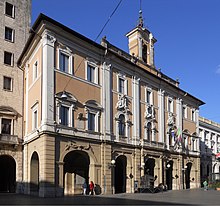 Also interesting are the sights in the Lake Lungo and Ripasottile Natural Preserve, and the Mount Terminillo. 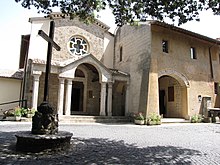 The Sanctuary of Fonte Colombo, near Rieti, founded by Saint Francis and part of the Cammino di Francesco pilgrim way

Strada statale 4 Via Salaria, the main road link between Rieti and Rome, near Poggio San Lorenzo

Rieti is not crossed by any of Autostrade of Italy; all roads connecting Rieti with other cities are therefore state highways (strade statali), in most cases single carriageway roads.

Rieti's railway station is located on the regional, low traffic Terni–Sulmona railway, with trains to Terni and L'Aquila.[11] There is no direct railway link between Rieti and Rome, as the construction of such railway has been subject of a long debate but never took place;[12] Rome can be reached by bus or by catching a train to the Terni station, where direct trains to Rome can be found.[13]

The Rieti Airport is mainly used by small private planes and for gliding. 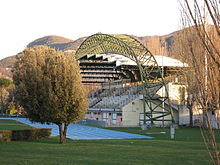 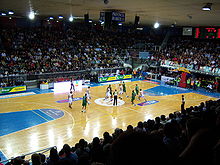