San Pedro Bay in a 1900 plan for the Los Angeles Harbor, present cities and districts are named

San Pedro Bay is an inlet on the Pacific Ocean coast of southern California, United States. It is the site of the Port of Los Angeles and the Port of Long Beach, which together form the fifth-busiest port facility in the world (behind the ports of Shanghai, Singapore, Hong Kong, and Shenzhen) and the busiest in the Americas. The Los Angeles community of San Pedro borders a small portion of the western side of the bay, and shares the name.[1][2][3] The city of Long Beach borders the port on the eastern side of the bay. The northern part of the bay, which is the largest part of the port, is bordered by the Los Angeles neighborhood of Wilmington.[4]

Most of the bay is between 32 and 75 feet (10 and 23 m) deep. The seabed near Long Beach has experienced considerable subsidence as a result of oil extraction in the Wilmington Field from the 1950s onward. This helped the Port of Long Beach surpass the Port of Los Angeles as the leading port in the United States for a time in the 1980s and 1990s, since the deeper seafloor meant that Long Beach could accommodate ships with deeper drafts than could Los Angeles. Dredging operations related to the construction of a gigantic new marine terminal at the Port of Los Angeles have since made both sides of the bay accessible to even the largest existing container ships. Concerns regarding subsidence increased until Operation "Big Squirt", a water injection program, halted any progression of sinking land in 1960.[5]

Natural islands in San Pedro Bay include Terminal Island (actually an augmented mudflat and Rattlesnake Island),[6] the site of much of Los Angeles' and Long Beach's port facilities, and Mormon Island, the site of an abortive settlement attempt by San Bernardino-based Mormon pioneers in the 1850s. Land reclamation operations by Los Angeles have considerably enlarged Terminal Island, as well as linking Mormon Island to the mainland. Deadman's Island sat at a landmark at the foot of the bay, but was removed in 1928 as part of the effort by Phineas Banning to enlarge the harbor. In 1927 an airport was built on Terminal Island.[7][8][9]

Four small artificial islands containing oil wells (the THUMS Islands) are scattered around the bay near Long Beach. The oil drilling equipment itself is masked by tropical landscaping, architectural features and fake high-rise "buildings" in an attempt to improve their appearance from shore. These islands, named Oil Islands Freeman, Grissom, White, and Chaffee, are named for Theodore Freeman, the first NASA astronaut to die during flight, and for Gus Grissom, Ed White, and Roger B. Chaffee, who were killed by a fire during the Apollo 1 mission.[10] 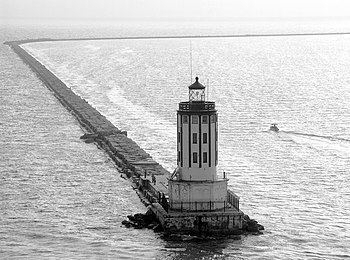 As Los Angeles developed as an economic and trading hub, the need for a deep harbor became apparent. In the late 1890s, the Southern Pacific Railroad started purchasing large parcels of land in Santa Monica near its terminus, and the Huntington family advocated for a Santa Monica harbor, which would have monopolized Southern Pacific freight. In opposition, the Los Angeles Chamber of Commerce and a newly formed Harbor League advocated for a harbor to be built in San Pedro, where the Southern Pacific would have competition with Phineas Banning's Los Angeles and Harbor Railroad. The resulting Free Harbor Fight and 1906 annexation of the Harbor Gateway ensured Wilmington and San Pedro would serve as the main port of Los Angeles. It also explains the considerable distance between the harbor and the city's main rail yards, a situation not addressed until the construction of the Alameda Corridor nearly a century later.[11]

The breakwaters provided the ports considerable protection in the 1939 California tropical storm. 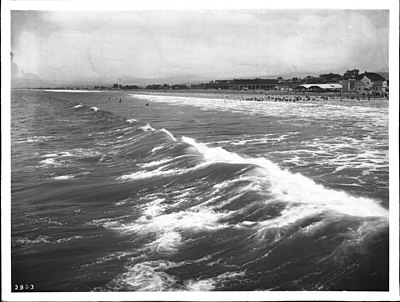 The Long Beach breakwater is the target of controversy within the harbor towns and Greater Los Angeles conservationist community, with various environmental groups, including the Long Beach chapter of the Surfrider Foundation, proposing modifying or removing the breakwater to promote better water flows and a more natural coastal environment at the mouth of the Los Angeles River. This restoration ecology-based removal is opposed by waterfront property owners and shippers, who consider that the breakwater provides needed protection from storm damage.[13][14]

A short documentary addressing the issues surrounding the reconfiguration of the Long Beach breakwater is available.[15]