The Southern California Megaregion (or megalopolis) is larger still, extending northeast into Las Vegas, Nevada and south across the Mexican border into Tijuana.[5]

Sunset in Venice, a neighborhood in Los Angeles

The counties of Los Angeles, San Diego, Orange, Riverside, and San Bernardino are the five most populous in the state, and are among the top 15 most populous counties in the United States.[7]

Southern California is also home to a large homegrown surf and skateboard culture. Companies such as Vans, Volcom, Quiksilver, No Fear, Stüssy, RVCA and Body Glove are all headquartered here. Skateboarder Tony Hawk; surfers Rob Machado, Timmy Curran, Bobby Martinez, Pat O'Connell, Dane Reynolds, and Chris Ward live in Southern California. Some of the most famous surf locations are in Southern California as well, including Trestles, Rincon, The Wedge, Huntington Beach and Malibu. Some of the world's largest action sports events, including the X Games,[8] Boost Mobile Pro,[9] and the U.S. Open of Surfing, are held in Southern California. The region is also important to the world of yachting with premier events including the annual Transpacific Yacht Race, or Transpac, from Los Angeles to Hawaii. The San Diego Yacht Club held the America's Cup, the most prestigious prize in yachting, from 1988 to 1995 and hosted three America's Cup races during that time. The first modern-era triathlon was held in San Diego's Mission Bay in 1974. Since then, Southern California, and San Diego in particular, have become a mecca for triathlon and multi-sport racing, products, and culture.

Southern California is home to many sports franchises and networks such as Fox Sports Net.

Many locals and tourists frequent the Southern California coast for its beaches. Some of southern California's most popular beaches are Malibu, Laguna Beach, La Jolla, Manhattan Beach, and Hermosa Beach. Southern California is also known for its mountain resort communities, such as Big Bear Lake, Lake Arrowhead, and Wrightwood, and their ski resorts, like Bear Mountain, Snow Summit, Snow Valley Mountain Resort, and Mountain High. The inland desert city of Palm Springs is also popular. 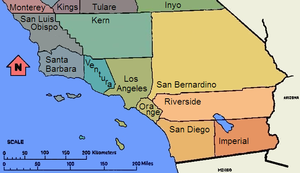 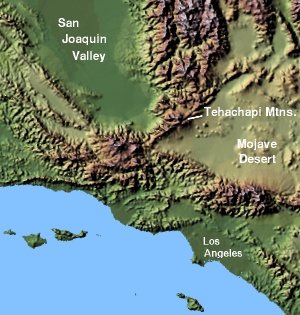 Topography of the border region

Following the acquisition of the territory of California by the United States, several pro-slavery politicians attempted to arrange the division of Alta California at 36 degrees, 30 minutes, the line of the Missouri Compromise. Instead, the passing of the Compromise of 1850 enabled California to be admitted to the Union as a free state, preventing the southern half California from becoming its own separate slave state.

Subsequently, Californians (dissatisfied with inequitable taxes and land laws) and pro-slavery Southerners in the lightly populated "cow counties" of southern California attempted three times in the 1850s to achieve a separate statehood or territorial status separate from Northern California. The last attempt, the Pico Act of 1859, was passed by the California State Legislature and signed by State Governor John B. Weller. It was approved overwhelmingly by nearly 75 percent of voters to form the proposed Territory of Colorado. This territory was to include a portion of the much larger Tulare County and all of San Luis Obispo County. The proposal was sent to Washington, D.C. with a strong advocate in Senator Milton Latham. However, the secession crisis following the election of Abraham Lincoln in 1860 and the subsequent American Civil War led to the proposal never coming to a vote.[10][11]

Southern California was the name of a proposed new state which failed to get on the 2018 California ballot. The ballot measure proposed splitting the existing state into three parts.[13] 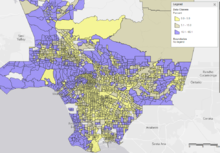 Percent of households with incomes above $150k across LA County census tracts.

Southern California consists of a heavily developed urban environment, home to some of the largest urban areas in the state, along with vast areas that have been left undeveloped. It is the third most populated megalopolis in the United States, after the Great Lakes Megalopolis and the Northeast Megalopolis. Much of Southern California is famous for its large, spread-out, suburban communities and use of automobiles and highways. The dominant areas are Los Angeles, Orange County, San Diego, and Riverside-San Bernardino, each of which are the centers of their respective metropolitan areas, composed of numerous smaller cities and communities. The urban area is also host to an international San Diego–Tijuana metropolitan region, created by the urban area spilling over into Baja California.

Travelling south on Interstate 5, the main barrier to continued urbanization is Camp Pendleton. The cities and communities along Interstate 15 and Interstate 215 are so interrelated that Temecula and Murrieta have as much connection with the San Diego metropolitan area as they do with the Inland Empire. To the east, the United States Census Bureau considers the San Bernardino and Riverside County areas, Riverside-San Bernardino area as a separate metropolitan area from Los Angeles County. Newly developed exurbs formed in the Antelope Valley, north of Los Angeles, the Victor Valley, and the Coachella Valley with the Imperial Valley. Also, population growth was high in the Bakersfield-Kern County, Santa Maria and San Luis Obispo areas. 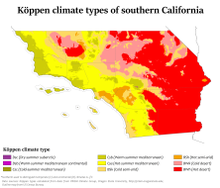 Most of Southern California has a Mediterranean-like climate, with warm and dry summers, mild and wet winters, where cool weather and freezing temperatures are rare. Southern California contains other types of climates, including semi-arid, desert and mountain, with infrequent rain and many sunny days. Summers are hot or warm, and dry, while winters are mild, and rainfall is low to moderate depending on the area. Although heavy rain can occur, it is unusual. This climatic pattern was alluded to in the hit song "It Never Rains (In Southern California)". While snow is very rare in lower elevations, mountains above 5,000 feet (1,500 m) receive plentiful snowfall in the winter.

Since the first decade of the 21st century, droughts and wildfires have increased in frequency as a result of climate change.[26][27] 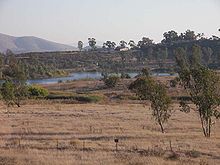 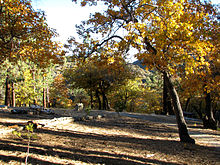 Southern California consists of one of the more varied collections of geologic, topographic, and natural ecosystem landscapes in a diversity outnumbering other major regions in the state and country. The region spans from Pacific Ocean islands, shorelines, beaches, and coastal plains, through the Transverse and Peninsular Ranges with their peaks, and into the large and small interior valleys, to the vast deserts of California.

Yucca Valley with Visitor Center in Background in June 2017.

Note: Plate boundary faults are indicated with a (#) symbol. 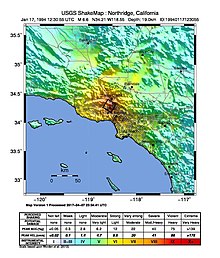 Each year, Southern California has about 10,000 earthquakes. Nearly all of them are so small that they are not felt. Only several hundred have been greater than magnitude 3.0, and only about 15–20 have been greater than magnitude 4.0.[28] The magnitude 6.7 1994 Northridge earthquake was particularly destructive, causing a substantial number of deaths, injuries, and structural collapses as well as the most property damage of any earthquake in U.S. history at an estimated $20 billion.[29]

Many faults are able to produce a magnitude greater than 6.7 earthquake, such as the San Andreas Fault, which can produce a magnitude 8.0 event. Other faults include the San Jacinto Fault, the Puente Hills Fault, and the Elsinore Fault Zone. The United States Geological Survey (USGS) has released a California earthquake forecast,[30] which models earthquake occurrence in California. 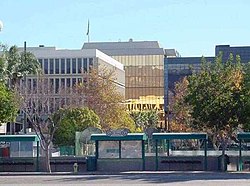 As of the 2020 United States Census, Southern California has a population of 23,762,904. Despite a reputation for high growth rates, Southern California's population has grown slower than the state average since the 2000s. This is due to California's growth becoming concentrated in the northern part of the state as result of a stronger, tech-oriented economy in the Bay Area and an emerging Greater Sacramento region.

See also: List of largest cities in California by population

Los Angeles (with a population of approximately 3.9 million people) and San Diego (at nearly 1.4 million people) are the two largest cities in all of California and are among the top eight largest cities in the United States. In Southern California, there are also 14 cities with more than 200,000 residents and 48 cities over 100,000 residents. Many of Southern California's most developed cities lie along or in close proximity to the coast, with the exception of San Bernardino and Riverside.

Southern California is home to most popular and famous literature in the region. These books include California by Kevin Starr, Malibu Farm Cookbook by Helene Henderson, L.A. Noir by John Buntin, The Mountains of California by John Muir, The New California Wine by Jon Bonné, and My Hollywood by Mona Simpson. Most of them are well received and nominated for rewards.[40][41]

Southern California has a diverse economy and is one of the largest economies in the United States. It is dominated by and heavily dependent upon the abundance of petroleum, as opposed to other regions where automobiles are not nearly as dominant, due to the vast majority of transport that runs on this fuel. Southern California is famous for tourism and the entertainment industry. Other industries include software, automotive, ports, finance, biomedical, and regional logistics. The region was a leader in the housing bubble from 2001 to 2007 and has been heavily impacted by the housing crash.

Since the 1920s, motion pictures, petroleum, and aircraft manufacturing have been major industries. In one of the richest agricultural regions in the U.S., cattle and citrus were major industries until farmlands were turned into suburbs. Although military spending cutbacks have had an impact, aerospace continues to be a major factor.[42] 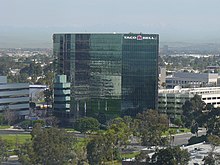 The San Bernardino-Riverside Area maintains the business districts of Downtown San Bernardino, Hospitality Business/Financial Centre, University District which are in the cities of San Bernardino and Riverside.

In Orange County, has highly developed suburban business centers (also known as edge cities) including the Anaheim–Santa Ana edge city along I-5; and another, the South Coast Plaza–John Wayne Airport edge city that stretches from the South Coast Metro to the Irvine Business Complex; Newport Center; and Irvine Spectrum. Downtown Santa Ana is an important government, arts and entertainment, and retail district.

Downtown San Diego is the CBD of San Diego, though the city is filled with business districts. These include Carmel Valley, Del Mar Heights, Mission Valley, Rancho Bernardo, Sorrento Mesa, and University City. Most of these districts are located in Northern San Diego and some within North County regions.

The following table shows all airports listed by the Federal Aviation Association (FAA) as a hub airport:[43] 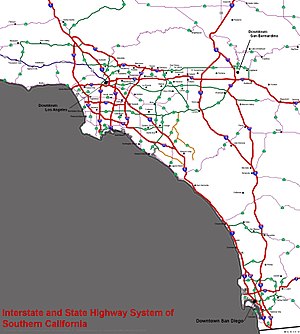 Sections of the Southern California freeway system are often referred to by names rather than by the official numbers. 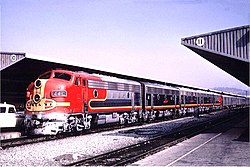 Main article: List of colleges and universities in Southern California 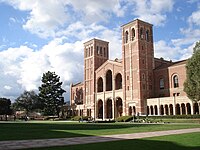 Southern California also is home to a number of popular NCAA sports programs such as the UCLA Bruins, the USC Trojans, and the San Diego State Aztecs. The Bruins and the Trojans both field football teams in NCAA Division I in the Pac-12 Conference, and there is a longtime rivalry between the schools.