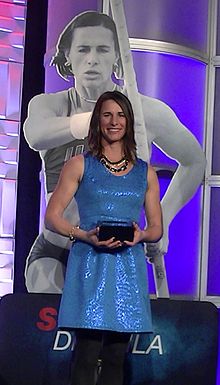 Dragila was born and raised in Auburn, California, northeast of Sacramento. She also participated in gymnastics, but had to give it up due to childhood asthma.

She attended Placer Union High School where she played volleyball and ran on the track team as a sprinter, hurdler, and jumper. Early on she got coaching from Yuba Community College's John Orognen. She competed in the 300 meters hurdles at the CIF California State Meet, but didn't place. In 1990, she placed second at the Golden West Invitational in the 400 meters hurdles.[1]

She graduated from Idaho State University in 1995. At ISU, she competed in the heptathlon. She was introduced to pole vaulting by her coach, a former vaulter himself, and she participated in some of the earliest sanctioned women's pole vault competitions.[2]

Dragila won the women's pole vault competition at the 1996 U.S. Olympic Trials. Women's pole vault was a demonstration event at the Trials, and it was not included in the program of the 1996 Olympics in Atlanta.[3]

After winning the 2000 U.S. Olympic Trials and resetting the world record at 4.63 m (15 ft 2 in), she won the first women's pole vault Olympic gold medal at the 2000 Olympic Games in Sydney. 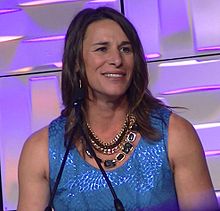 In 2014, she was elected into the National Track and Field Hall of Fame.[5] Dragila Way, on the campus of Idaho State University in Pocatello, is named in her honor.

† The 1996 contest was a non-championship event

She lived in San Diego, California, and is the founder of Altius Track Club.